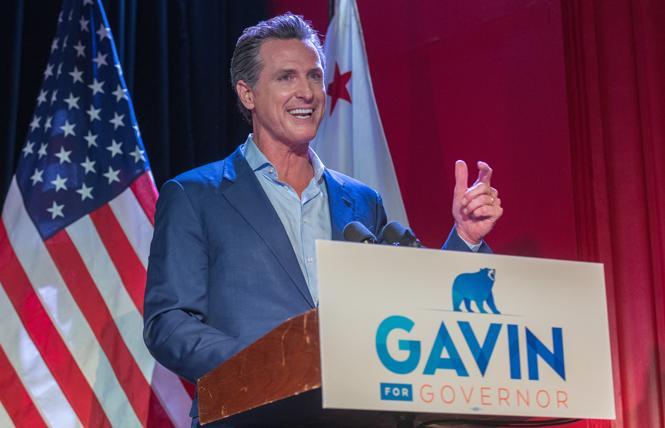 Governor Gavin Newsom signed two bills into law on Saturday that will provide teacher and school staff training to combat bullying and have hospitals disclose how many of their contracts are awarded to LGBT-owned businesses and those operated by other minority groups.

Assembly Bill 493, the Safe and Supportive Schools Act of 2019, will require annual training for teachers and certificated staff, such as guidance counselors and librarians, with the goal of creating a safer and more supportive school environment.

AB 962 will require hospitals to release information about how much contracting they do with businesses owned by members of historically disadvantaged groups, including women, racial and ethnic minorities, and the LGBT community.

The Safe and Supportive Schools Act was introduced by Assemblyman Todd Gloria (D-San Diego), who said in a news release that the legislation was influenced by his own painful past as a gay student in school.

"The bullying and name calling I experienced in school as a young gay kid is still a reality for today's LGBTQ youth. No child should have to experience that," said Gloria. "Equipping educators with resources to better support LGBTQ students will create a safer and more inclusive environment for these students to be successful."

The law requires that the California Department of Education create a training program by 2021 that focuses on the issues LGBT students have to deal with. It was co-sponsored by Equality California and state Superintendent of Public Instruction Tony Thurmond, who tried to get a similar bill passed last year while he was in the Assembly. Former Governor Jerry Brown vetoed that bill due to its price tag. AB 493 is estimated to cost between $250,000 and $1.3 million for school districts to implement.

Supporters said the training will help school employees deal with the verbal and physical abuse that many students — both those who are or will become LGBT, and those who are perceived that way — have to deal with frequently, sometimes on a daily basis.

A total of 58% of the LGBT students surveyed said that they felt unsafe at school because of how people respond to their sexual orientation and/or gender identity.

"I'm very excited that AB 493 got signed into law," Assemblyman Phil Ting (D- San Francisco) said in a phone interview with the Bay Area Reporter. "It sets a good trend to make sure teachers are properly trained and support LGBT people.

"Bullying is up, not only or LGBTQ people but for everyone," he added.

Also praising the signing in a phone interview with the B.A.R. was gay state Senator Scott Wiener (D-San Francisco).

"This is an important step toward full inclusion of LGBT kids in our schools," said Wiener. "It creates a foundation for working toward ensuring global training of teachers about how to support our LGBT kids."

"No student should ever have to compromise who they are in order to succeed, and we must ensure all LGBTQ students have the support they need for their future," he said in a statement.

"California is taking the necessary steps to ensure that a student's sexual orientation or gender identity is never an obstacle in pursuit of an education."

"We actively teach students about individual and family diversity," she wrote in an email. "Many of our schools have LGBTQ parent/guardian groups, and some if not all of our middle schools have LGBTQ student clubs or gay-straight alliances."

"Today, Governor Newsom sent a loud and clear message to LGBTQ students across California that we have their backs," EQCA Executive Director Rick Zbur said in an October 12 statement. "The Safe and Supportive Schools Act will not only start a multi-year process to ensure that teachers and school staff have the tools and training they need to support their students, but it will put California on a path to serving as the gold standard for school climate."

Newsom signed the law as part of a package of education bills.

Contracting
AB 962 was introduced by Assemblywoman Autumn Burke (D-Inglewood) and Assemblyman Rob Bonta (D-Oakland). In an attempt to promote diversity among contractors with hospitals that have budgets above $25 million, the new law requires California hospitals to publicly disclose how much they are contracting with LGBT-owned businesses as well as those owned by women, minorities, and other disadvantaged groups.

As the B.A.R. previously reported, the transparency requirement is aimed at seeing more such companies benefit from the estimated $230 billion the state's hospital industry spends annually. It mirrors recent efforts to encourage other industries in the state, from public utilities to transportation agencies, to also increase their contracts with minority-owned firms.

The law requires hospitals to report their supplier diversity broken down by minority-, women-, LGBT-, and veteran-owned businesses. It is similar to a bill that went into effect in 2015, AB 1678, that required electrical, gas, water, and other public utilities with annual revenues of more than $25 million to include LGBT-owned firms in their contracting diversity outreach efforts.

Updated, 10/15/19: This story has been updated with school officials' comments.