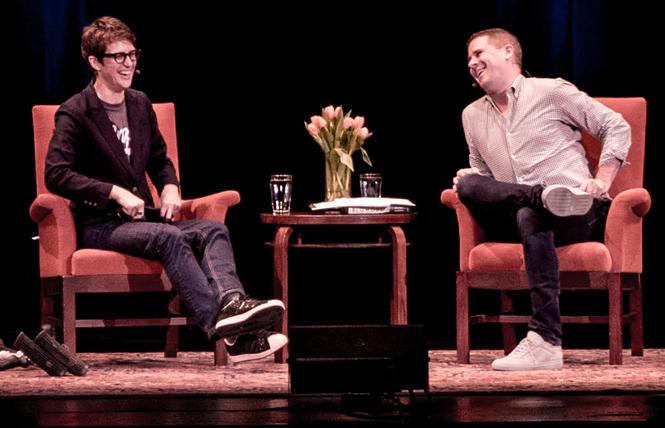 The event was Maddow's second stop on her publicity tour for her recently released book, "Blowout: Corrupted Democracy, Rogue State Russia, and the Richest, Most Destructive Industry on Earth" (Crown).

Maddow, 46, has had her eponymously named show on MSNBC for the past 12 years, the first lesbian to host a major prime time news program in the U.S. According to her publicist, Nielson reports that "The Rachel Maddow Show" is MSNBC's highest rated regularly scheduled show.

Maddow grew up in Castro Valley, in the East Bay, received an undergraduate degree in public policy at Stanford, and a master's and doctorate in political science at Oxford, where she was a Rhodes scholar.

Twenty years ago, she met her partner, Susan Mikula, an artist. The two commute between their homes in New York City and rural Massachusetts, where they spend most weekends.

Hobbling onstage on crutches due to an accident when she fractured her ankle when she missed a stair getting into a fishing boat, Maddow wore her trademark blazer, T-shirt, jeans, and black sneakers and displayed her modest demeanor, telling the audience she still finds it "emotionally hard to accept" an enthusiastic standing ovation.

Although she had a successful book tour for her 2012 New York Times bestseller, "Drift: The Unmooring of America's Military Power," Maddow said it was "more emotional, moving, and intimidating" to see so many people in person this time, because in 2019, "we spend most of our time" behind a screen.

Maddow opened the evening with a short reading from her book, pointing out that when she first began writing it, "there was no talk of impeachment" of President Donald Trump. The fact that it was published the same week that the House of Representatives announced it had begun an impeachment inquiry was "just luck," she said.

The book, the story behind why the oil and gas industries play such a powerful role in world politics, didn't start out on that subject. It began, she said, when she wanted to "figure out why Russia hacked the election."

Only after she dug into the research did she realize the story she really wanted to tell was how what she called the world's most destructive business — the oil and gas industry — was threatening the future of democracies around the world.

"I wasn't an expert" on oil and gas, she said, "and after I wrote this book, many people still think I know nothing" about the field.

The book covers myriad topics — fracking in Oklahoma; the Deepwater Horizon oil spill in the Gulf of Mexico; the Sochi Olympics; corruption in Equatorial Guinea, and finally, Russia's interference in the 2016 presidential election.

"It seems unlikely," she wrote, but "it all ties."

Following the reading, Maddow chatted with Pfeiffer, a former longtime aide to Barack Obama beginning with his first run for president, and took spontaneous unscreened questions from audience members, an unusual move for a prominent speaker, who usually make sure they know all the questions beforehand.

Her comments covered a wide range of topics, from how she thinks the impeachment inquiry will end to what is happening to democracies around the globe.

Maddow said her "obsession with Russia" came to a head when "I got stuck trying to figure out their motive" for tampering with the 2016 election.

Maddow said she was struck with Russia's decision to intervene despite the unfavorable "risk reward" ratio of such a crime, should it be caught.

"They didn't cover their tracks very well ... and left fingerprints everywhere they went," she observed.

But at the time, Russia was faced with a "terrible economy," with only a single industry — oil and gas — and a notable lack of technology and manpower to drill it out of the ground, leaving it needing help from Western countries where many companies had much greater expertise in that area.

The problem, said Maddow, was that under the sanctions imposed on Russia for invading Ukraine, Western companies were prohibited from working with Russia to help bring the valuable commodity out of the ground.

Aware of the fact that as president, Trump would be more likely to lift the sanctions than Hillary Clinton ("a known hawk on Russia"), the Russians knew it would be important to their long-term survival to get Trump elected, she said.

Pfeiffer asked Maddow if she believes the interest in lifting sanctions was Russia's "underlying motive" for hacking the election. "I've thought about that question a lot," she said. Unfortunately, she said, "we'll never get a real answer" from the Russians.

Maddow was careful not to criticize people working in the oil industry, pointing out that relatives of hers and her partner work in the business. But the oil and gas industry is "clearly microwaving the planet," with more than 75% of carbon emissions from oil and natural gas.

Maddow sees light at the end of the tunnel, pointing out that there are examples of governments that have successfully confronted the oil and gas industries, including the state of Oklahoma, where activists prompted new laws that rolled back some of the powers that the oil industry had won in controlling how the industry operated in the state. It may not sound "world changing" but the success there indicates that it can be replicated elsewhere, she noted.

Climate activists are likely to lead to more changes, she said. "The brilliant activism of the current generation will force changes in the world, including a worldwide reckoning about what fuels we use," she said.

"When we turn away from oil and gas, it's going to be a huge deal," she said, "with major geopolitical consequences" including changes in the boundaries of countries that suddenly lose market share in the energy business.

"It could happen fast," Maddow said, "which is what I tried to write about in this book. The first step is learning and understanding the problem."

Maddow said that the election of a Democratic president in 2020 would make other changes more likely, given the number of regulations Trump has rolled back with executive orders. Also, she said, "Renewables are great industries ... and getting cheaper all the time."

Pfeiffer asked Maddow how she decides each evening what is most important to talk about on her show with so many important stories breaking every day. That, said Maddow, is the most "intellectually satisfying" and most difficult part of her job.

"Figuring out" which stories to present is "the real work," she said. "There is no way to get the balance right and you rarely hit the bull's-eye."

"We have a few little tricks" on the show, Maddow said, such as refusing to repeat anything the president says but instead covering what he actually does. The president "controls the media by saying things that seem crazy or outrageous, which are almost never true" but are repeated by some news programs.

"My job is to digest the news and tell you what is most interesting," she said. "That's a big responsibility and it's hard" to do. She added that recent breaking news stories involving impeachment have complicated the problem, particularly when news breaks just before airtime and it's difficult to figure out how significant the news is.

Pfeiffer said Trump often leads some of the media "by the nose" when they are quick to report on his Twitter posts. "How concerned are you about the public being informed about what's going on?" he asked Maddow.

"It's always a risk," she said, noting that the previous week, while appearing on the ABC show "The View," Republican panelist Abby Huntsman suggested that Maddow and other liberal commentators might be part of the problem.

Huntsman said citizens feel newscasters are "constantly crying wolf" when reporting something the president has said or done.

"Of course it sounds like we're crying wolf because the president keeps doing things that warrant impeachment," Maddow said.

At the moment, said Maddow, "it is most likely" that the president will be impeached by the Democratically-controlled House of Representatives but will stay in office because almost all the Republicans in the Senate will continue to back him and will not vote to convict.

But politicians should remember that their vote on this "will be the first thing written in their political biography." Everything else they've accomplished in their career will be dwarfed by this vote, she said.