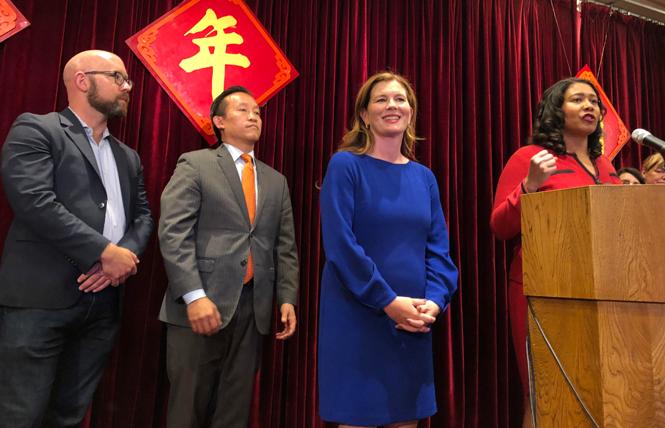 At least one progressive Democratic club and a civil liberties group have blasted Mayor London Breed's decision to name Suzy Loftus, who is running for district attorney, to serve as interim DA once the current officeholder, George Gascón, vacates the position next week.

"We urge Mayor Breed to do the right thing and appoint someone to this interim post who is not running to be district attorney and let the voters of San Francisco decide who will be their next district attorney," the statement reads.

The ACLU made the case that district attorney races are usually uncontested or won by incumbents. This is the first open DA race in San Francisco in 100-plus years.

"Appointments like these are fundamentally undemocratic and favor candidates who have establishment support, as opposed to allowing the process to run its course and let voters decide in an even playing field," the organization stated.

The Harvey Milk LGBTQ Democratic Club, which has endorsed candidate Chesa Boudin, was even more scathing in its statement. The club's executive board compared Boudin's fight against the establishment with that of the club's namesake.

"The same institutions that tried to keep Harvey out of office are doing their damnedest to deny Chesa a fair shot because they are scared," the statement reads. "They should be scared because when Chesa wins, it is going to be a victory for Us — for all of the Us's — over the powers that be."

The Milk club statement accused Breed of practicing "machine politics at its worst."

"This was a desperate move, one that puts entrenched political factions above and against democracy," the statement reads. "This erasure of our democratic norms deserves to be called out, regardless of who you support for district attorney."

Shortly before the October 4 announcement, protesters arrived at Portsmouth Square, where the mayor was to speak. The announcement was moved to a nearby dim sum restaurant and made for a chaotic scene as the news media, detractors, and supporters of Loftus followed her through the streets of Chinatown to find the mayor at the new location.

Gascón announced Thursday that he was resigning effective October 18 in order to move to Los Angeles County. He is widely expected to run for DA there and needs to establish residency, according to a story in the San Francisco Chronicle.

Gay District 8 Supervisor Rafael Mandelman, who has endorsed Loftus, defended the appointment, saying that it wouldn't be responsible of the mayor to leave the office vacant when there is a qualified candidate available.

Montoya said the SFPOA is "thankful" Breed did not appoint Boudin, whom he described as a "criminal and domestic-terrorist apologist." When he was a toddler, Boudin's parents drove the getaway car in an armed robbery that took three lives. His mother spent 22 years in prison. His father is still incarcerated.

Tung, the most conservative candidate in the race, criticized the mayor's decision.

Early voting in the election started this week.