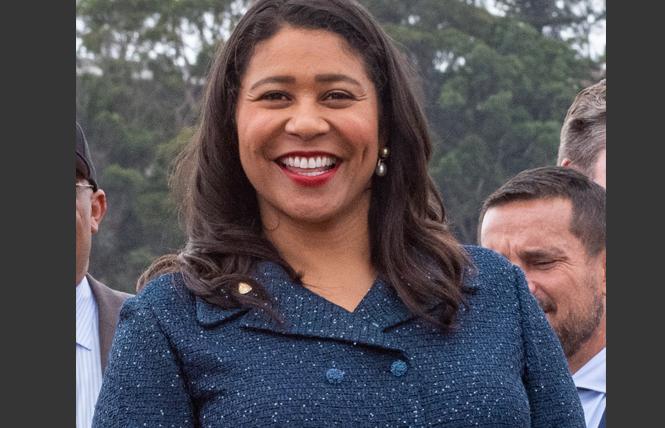 When San Francisco Mayor London Breed arrived at our office for an editorial board meeting last week, she was visibly irritated. From a conference room window, Breed could clearly see a homeless encampment that had taken over a vacant City College building across the street, prompting her exasperation that homeless outreach workers had not been on site to offer the people help. She noted that the last time she had met with us there were homeless tents outside our building, which is a short walk from City Hall. The mayor quickly contacted city personnel to get to the scene. "Where's the Hot team?" she asked, referring to outreach workers.

Breed is widely expected to easily win re-election next month, which will give her a full four-year term to implement her vision for the city. With only minor candidates challenging her, Breed told us that it's a sign "people really want to give me a chance — even some board members." The San Francisco Board of Supervisors may tilt more progressive than she's inclined, but Breed has found common ground on a number of initiatives with supervisors since becoming mayor last July to fill the remaining term of the late mayor Ed Lee.

Breed has a long to-do list that starts with homelessness, which she has already started to tackle in her first year. She broke ground for 167 new affordable homes in the Sunnydale neighborhood. Last month, she announced a new mental health initiative with Tipping Point Community and UCSF to support behavioral health initiatives. As an initial response to the recommendations in the report, Tipping Point will fund 15 new Hummingbird beds, which provide psychiatric respite and a place where clients can be linked to care, services, and treatment. The city will also pursue implementation of a managed alcohol facility to help those suffering from alcohol use disorder. She added 60 new beds to the Division Circle Navigation Center. She has been resolute in her plans to open more Navigation Centers, the most recent among them along the Embarcadero, which has been stalled by NIMBY neighbors. (They recently lost a court fight, allowing the city to proceed.)

Breed is focused on the housing crisis. She will have an opportunity to hire a new planning director and she told us that she wants a "reformer," someone who can get more housing units constructed at every affordability level, from below-market-rate to affordable units for educators and other workers to market rate. "I want to really change the culture of the department," she said, including making it more efficient and less bureaucratic. That will likely take some time, as the city is notoriously permit-heavy.

On LGBT issues, the mayor is a tremendous ally. Months after taking office, she was invited to Alabama by the president of the U.S. Conference of Mayors for the launch of the Mayors and Business Leaders Center for Inclusive Compassionate Cities, but she declined because the state is on the city's banned travel list for having anti-LGBT laws on its books.

Breed hired LGBT department heads, including Dr. Grant Colfax, a gay man, to lead the Department of Public Health, and Jeanine Nicholson, a lesbian, as the city's first out fire chief. Under her administration, gay men Matthew Goudeau and John Caldon were named director of Grants for the Arts and managing director of the War Memorial, respectively. She named several LGBTs to seats on city boards and commissions and told us that her appointments secretary is keenly aware of the need for nominees to reflect the diversity of the city.

Breed supports our neighborhoods and values. In March, she signed the national Open to All pledge at an event in the Castro to promote the gayborhood and signal that the city encourages businesses and residents to oppose discrimination and declare that they are open to all regardless of race, ethnicity, national origin, sex, sexual orientation, gender identity and expression, religion, or disability.

Breed supports city projects that commemorate LGBT history. She cut through the red tape to get construction started at Eagle Plaza, the centerpiece of the city's leather cultural district. This summer, she signed legislation creating the Castro LGBTQ Cultural District.

On trans issues Breed has set herself apart, although in at least one case she praised Lee for a personnel decision: "I would like to take credit for Clair but that was Ed Lee," she said, referring to Clair Farley, a trans woman who is director of the Office of Transgender Initiatives. The women work well together and it shows. Last year, the mayor issued a directive to all city agencies and departments that collect demographic data to update their paper and electronic forms to include the option of nonbinary in addition to male and female when recording gender identity. The mayoral directive, which took effect immediately, also ordered that the forms expand on title options beyond Mr. and Ms. and include additional choices for pronouns other than just she/her/hers and he/him/his. The forms must also include a line for a person's chosen name and use gender-neutral labels such as "parent/guardian" instead of "father" and "mother."

Most significantly, Breed recognizes that trans people are almost 18 times more likely to experience homelessness than the general population in the city, and embraces the Our Trans Home SF Coalition's request for rental subsidies. Her fiscal year 2019-2020 budget — at $12.3 billion is the city's largest — includes $2 million to fund a two-year pilot program to provide housing subsidies for 75 transgender households. That program is expected to start soon. "It's the first time we've ever done anything like this," she told us. "It will be a game-changer for the community." Another $1 million is budgeted for other trans initiatives and the LGBTQ Host Homes program being launched by the LGBT Community Center for transitional aged youth, including queer youth.

During her first year as mayor, Breed has sought creative and new ideas to help marginalized people and to address complex issues facing San Francisco. The city is far from perfect, and we don't think Breed is satisfied either, especially regarding homelessness and mental health care challenges. We endorse Breed because she has initiated a record of accomplishments that she can build on in the next four years.