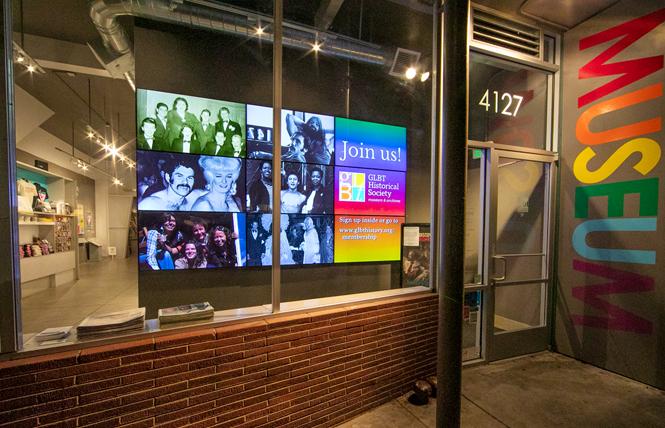 Where to build a new, full-scale LGBTQ Museum and Research Center in San Francisco remains an open question for the GLBT Historical Society. Not in question is the myriad curatorial possibilities a larger facility would present.

The 34-year-old archival group has a vast collection of materials documenting the history of the LGBT community. But it is limited in how much of its holdings it can display for the public in the 1,600 square foot storefront it leases in the heart of the city's LGBT Castro district.

For this year's LGBTQ History Month, the Bay Area Reporter asked the historical society to delve into its archives and select objects it envisions could one day be used as the centerpieces of exhibitions in a future, permanent museum. Most of the items featured in the five-part series running weekly in October have yet to be put on exhibit for the public.

The items illustrate the diversity of the LGBT community and represent different mediums museum curators work with in designing and organizing exhibitions. The series kicks off with garments worn by gay disco diva Sylvester and a married female bisexual couple. Subsequent stories will feature a transgender pioneer's diaries, leather textiles, artwork, and political ephemera.

They are representative of the holdings stored away in the stacks of the society's archive housed in a downtown building. In 2018, the society received a $30,000 grant from the San Francisco Office of Economic and Workplace Development's Historic Preservation Fund to assess its art and artifacts collection, create a detailed inventory of the items, and photograph each one so the images can be posted online. More than 800 objects have already been documented, and the society aims to finish cataloging the remaining items by the end of 2020.

In terms of its museum, the society received a lease extension for the 18th Street space through 2022. As for where to build the new museum, the society would like to find a suitable site somewhere in the Castro, or perhaps partner with a developer that has a project in the Central South of Market neighborhood. Later this month it will be releasing a 140-page detailed analysis of the proposed museum project.

"The museum is going to be a destination regardless where it goes," predicted GLBT Historical Society Executive Director Terry Beswick.