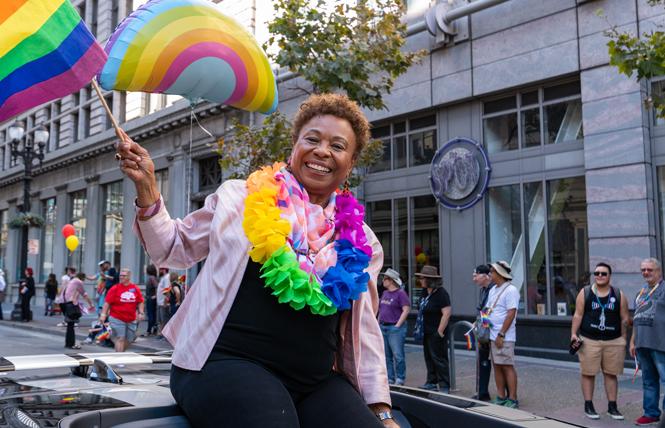 We've made incredible progress in the fight against HIV and AIDS over the past several decades, but the fight is far from over.

There are more than 1.1 million people living with HIV in the United States, and communities of color and LGBTQ people continue to be disproportionately impacted by the epidemic. According to the Centers for Disease Control and Prevention, of the nearly 40,000 Americans diagnosed with HIV each year, African Americans account for 43% of HIV diagnoses. African American gay and bisexual men account for the largest number of diagnoses, with Latinx gay and bisexual men not far behind. In 2017, among women, women of color accounted for 80% of new diagnoses, with black women accounting for 59%. An estimated 15% of people living with HIV in the United States are unaware of their status.

These very real health disparities can be seen in my congressional district. Alameda County, which I represent, was identified by the CDC as one of the 48 counties across the country with the highest number of new HIV diagnoses. There were more than 6,417 people living with HIV in Alameda County in 2017, the most recent year for which data is available. From 2015 to 2017, 38.2% of people newly diagnosed with HIV in my district were African American, and 26.9% were Latinx, compared with 22% for whites. Of these, 1,027 were women — 84% of those women were women of color. Stigma continues to play a role in preventing people living with HIV, or those at risk of contracting the disease, from getting the care they need.

With nearly 40,000 new HIV diagnoses a year, one thing is clear: HIV remains a national public health crisis. We know we have the tools to end the HIV epidemic in the United States — but we need the attention and resources to do it.

That's why I'm proud that the 23rd International AIDS Conference (AIDS 2020) will be co-hosted by Oakland and San Francisco next year. It's important to lift up the phenomenal work of the community advocates who fight to address the HIV epidemic in the East Bay every day as a well as highlight the work that still must be done, especially in minority communities.

But it's not just Oakland. That's why I continue to fight for increased federal spending to address this issue nationwide. As a senior member of the House Appropriations Committee, I fought for $500 million for the first year of the Ending the HIV Epidemic Initiative — nearly twice the level that the Administration requested — and an over $100 million increase for critical programs like the Ryan White CARE Act program and the Minority AIDS Initiative.

As someone who has worked to address the global HIV epidemic my entire career, I welcomed the Ending the HIV Epidemic Initiative and believe it is a step in the right direction. However, we cannot truly end the HIV epidemic in the United States without also addressing factors such as stigma and discrimination — and anti-LGBTQ and other counterproductive Trump administration policies that undermine the goal of ending the HIV epidemic.

The Affordable Care Act has been critical to ensuring that people living with HIV can get access to the treatment they need, but President Donald Trump has fought tirelessly to undo this legislation. His administration has undermined efforts at comprehensive, evidenced-based sex-education and re-education on HIV and AIDS. Trump has also proposed significant budget cuts to crucial programs like the Medicaid and the Ryan White CARE program. We know that it will take increased federal resources and coordination on the state, local, and community levels to reach our shared goal of ending the HIV epidemic.

Barbara Lee represents California's 13th District in Congress, which includes Oakland and other East Bay communities. She is a co-founder and co-chair of the Congressional HIV/AIDS Caucus and has authored or co-authored every major piece of HIV/AIDS legislation since entering Congress in 1998.