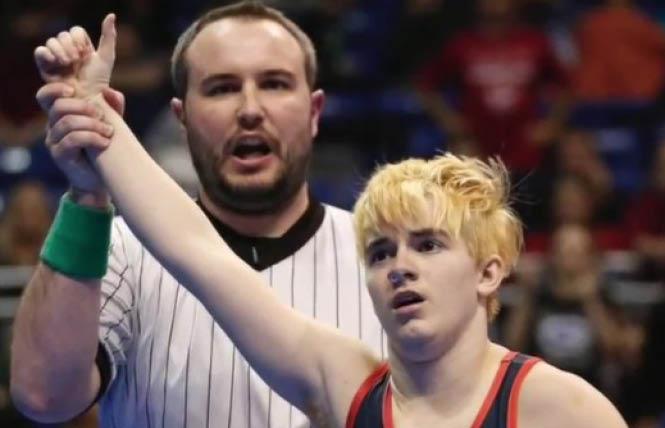 Early in "Mack Wrestles," a 30-minute documentary about transgender wrestler Mack Beggs that premieres on ESPN's "30 for 30" Sunday, September 22, his grandmother talks about her grandchild's early struggles with self-acceptance.

The Bay Area Reporter attempted to get an interview with Mack Beggs, but was told he wasn't available until later this week, after the paper's print deadline.

The documentary, directed by Taylor Hess and Erin Sanger, chronicles the wrestler's battles through his high school years and up to acceptance to college, but does a poorer job of letting viewers know more about Mack Beggs himself or the failure of Texas policy makers to properly address the issues Mack Beggs' career raised.

Not much is explained about why, after Mack Beggs qualified for the state's national team by beating other boys after high school, he was abruptly dropped from the team, although hints linger in the background. Not much is explained about his upbringing or family life, although we do learn that his grandmother (who, the film does not mention, is his legal guardian) at first just thought Mack Beggs was a tomboy like herself and his grandfather is supportive but has trouble with his pronouns.

Of course, Mack Beggs was surrounded by authorities who seemed a tad confused, unintentionally or otherwise, about pronouns and identity. In Texas high schools, wrestlers are compelled to wrestle in the gender category on their birth certificates, not the gender with which they identify. So Mack Beggs, who had started taking steroids as part of his transition protocol, was not allowed to wrestle in the boys category — the category in which he and damn near every other person in Texas wanted him. Instead he had to wrestle for Trinity High School in Euless, Texas in the girls state tournament, which he won twice.

The film mentions that between his two state championships, the Legislature attempted (and failed) to prevent him from wrestling by barring even the medical use of testosterone in high school sports, mentioning him by name 27 times in their debate.

What it doesn't mention is what else Texas policymakers failed to do in that year between championships: change the rule that prevented him from wrestling with other boys. They had a year to fix what they knew was a problem that disadvantaged Mack Beggs and the girls he wrestled. They blew it.

The result? Mack Beggs' championship runs were made through a crucible of hostile, booing spectators. His coach shuttled him away from public view between matches, taking him into arena tunnels to get away from the madness.

Most of the girls he beat — those that actually wrestled him rather than forfeiting — felt cheated. And Mack Beggs himself felt cheated out of the joy of fair competition.

After his hand was raised in victory to the booing of the crowd, "next thing I knew, I was being dragged off into the hallway again. It didn't really feel like a celebration," he says.

Later, his father says he was disappointed and surprised that Mack Beggs did not receive special recognition for his two titles during an assembly.

No, no, no, Mack Beggs interrupts.

"I wouldn't want that," he said. "I really don't feel like I deserve it. Yeah, I won the state titles, but if you were to go against a girl, would you feel like you deserved it?"

And that, folks, is the cost of transphobia: the often-unarticulated asterisk inevitably attached to life's hard fought victories. We are left with the hope that as Mack Beggs, 20, makes his way through his college wrestling career, battling other men on the mats for Life University, he can know the success he holds in his hands is truly his.