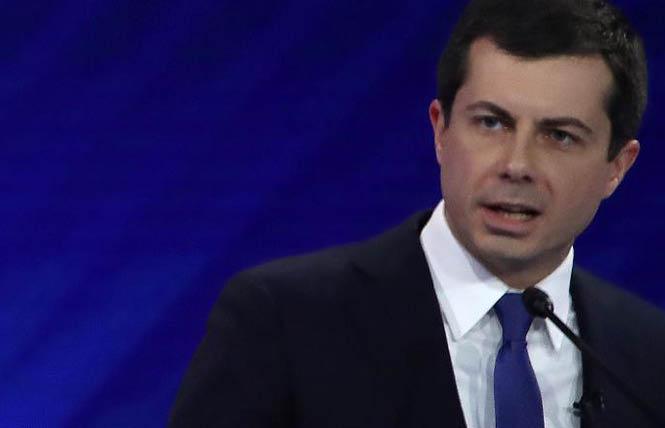 The only reference to LGBT issues in last Thursday's debate came near the end of the three-hour event when candidates were asked to describe "the most significant professional setback" they have ever faced and how they recovered or learned from it.

Gay South Bend, Indiana Mayor Pete Buttigieg said his was the decision to come out while serving as mayor and in the military.

"I had to wonder whether just acknowledging who I was was going to be the ultimate career-ending professional setback," said Buttigieg. It was a moment Buttigieg has described publicly before, including in his memoir "Shortest Way Home."

"I came back from the deployment and realized that you only get to live one life. And I was not interested in not knowing what it was like to be in love any longer, so I just came out. I had no idea what kind of professional setback it would be, especially because, inconveniently, it was an election year in my socially conservative community," said Buttigieg. "What happened was that, when I trusted voters to judge me based on the job that I did for them, they decided to trust me and re-elected me with 80% of the vote. And what I learned was that trust can be reciprocated and that part of how you can win and deserve to win is to know what's worth more to you than winning. And I think that's what we need in the presidency right now."

Besides being the only out candidate in the race and the only candidate among the top 10 with military service, Buttigieg is clearly trying to position himself as a moderate among Democrats.

In the debate over Medicare for All versus the Affordable Care Act, Buttigieg offers "Medicare for All who want it." In the debate over assault weapons — whether to ban them entirely or try to make sure they can't fall into the hands of dangerous killers — Buttigieg told CNN's "State of the Union" Sunday that candidate Beto O'Rourke was wrong to say he would take away all assault weapons. But then Buttigieg explained, "We have agreement among the American people for not just universal background checks but we have a majority in favor of red flag laws, [bans on] high-capacity magazines, [and] banning the new sale of assault weapons."

A red flag law is a gun control law that permits police or family members to petition a state court to order the temporary removal of firearms from a person who may present a danger to others or themselves. California is one of 14 states and the District of Columbia with such a law.

Many political pundits said they don't think much will change in the poll standings as a result of last week's debate, but it does seem clear now that Buttigieg has raised enough money and voter interest to remain a viable candidate in the Democratic presidential race through Iowa. His candidacy has drawn repeated comments from Republican President Donald Trump, has inspired repeated editorial scrutiny from the Wall Street Journal, and scored appearances on two Sunday political talk shows post-debate.

This month, the Buttigieg campaign began opening up 20 offices across Iowa to ramp up support ahead of the February caucuses. The Des Moines Register reported Buttigieg had raised more money from Iowans than had any other candidate.

Wednesday, September 18, at 12:30 p.m. Pacific, Buttigieg is hosting a video conversation and Q&A that his campaign is billing as its "first-ever virtual investment event." The price to log in begins at $250. Later this month, the candidate will be swinging through the Bay Area again to host fundraisers in Tiburon (Sunday, September 29) and Hillsborough (Monday, September 30).

Buttigieg is in second tier
Polling data has separated the field of viable Democratic candidates into four distinct tiers: double-digits (former Vice President Joseph R. Biden Jr. and Senators Bernie Sanders, Vermont, and Elizabeth Warren, Massachusetts), single-digits above the Democratic National Committee threshold (Senator Kamala Harris, California, and Buttigieg), single-digits at the DNC threshold (businessman Andrew Yang; Senator Cory Booker, New Jersey; and O'Rourke, Texas), and single-digits below the threshold (all others). The Democratic Party has set 2% as the threshold of polling support a candidate must have in four national polls in order to participate in the party's nationally televised debates.

Ten candidates met that criteria for the September 12 debate and all have reportedly qualified for the next debate, October 15, along with California billionaire Tom Steyer.

Polling has been consistent for weeks now: Biden is in the lead by between 6 and 10 points over the next contender. He is followed by either Sanders or Warren, depending on the poll. The latest CNN poll showed Warren with 18%, and Sanders with 17%. The latest RealClearPolitics.com averaging of many recent polls showed Biden with 26.8%, Sanders with 17.3%, and Warren with 16.8%.

In the second tier, using RealClearPolitics averaging, Harris has 6.5% and Buttigieg has 4.8%.

Nate Silver, a gay man and polling data guru at www.fivethirtyeight.com, recently commented on the odds of winning the nomination, given candidates' placement at this point.

"I'd much rather wager a few shekels on Joe Biden than Pete Buttigieg, for instance. But I don't think there's any hard-and-fast distinction between the top tier and the next runners-up," said Silver. But he added that candidates in the low single digits have almost no chance now of winning.

Silver doesn't buy into some media speculation that the nomination race is down to just the three double-digit candidates: Biden, Warren, and Sanders. He points to polling in the early primary states as "historically fairly predictive" of who wins the nomination.

Next forum: Friday
The latest poll in Iowa (taken August 28 to September 4) shows Biden with 29% support, followed by Sanders with 26 points, Warren with 17, Buttigieg with 7, and Harris with 6. (The survey was conducted by CBS News and YouGov.com with 835 registered voters in Iowa who identify as Democrats. Margin of error is 4.3%.)

Four out of those five candidates (everyone except Sanders) have confirmed they will participate Friday, September 20, in an LGBT-specific debate sponsored by the Iowa statewide LGBT group One Iowa and three media organizations. Six other participants, thus far, are Booker, Castro, Gabbard, Klobuchar, former Congressman Joe Sestak, and author Marianne Williamson.

It was announced by GLAAD, one of the sponsors, that transgender activist and actress Angelica Ross ("Pose") will host the forum.

The debate will be livestreamed on several internet sites, including http://www.thegazette.com and a YouTube site. The forum is slated to run from 5 to 7 p.m. Pacific Time at Coe College in Cedar Rapids, Iowa.

"I've been lucky to work with Elizabeth since well before she became our senator," wrote Healey, in an email blast to supporters. "What I've come to know is that Elizabeth Warren is laser focused on how we help families in this state and across this country. She also knows that you can't just tell people what you're going to do. Real change happens when you have a plan to get it done, and the resolve and strategy to fight for it."

Biden has often been given credit for persuading Obama to make a statement in favor of allowing same-sex couples to marry. In May 2012, Biden said he was "absolutely comfortable" with allowing same-sex couples to marry, something that was possible only in a few states at the time. Obama had been walking a tightrope between support for repealing the federal Defense of Marriage Act and support for full legal marriage equality.

While Obama had vigorously supported the repeal of DOMA and had spoken in opposition to bans on same-sex marriage in California and North Carolina, he and his administration had not yet made any explicit statements in support of legal marriage equality in the states. Commentators at the time were split — some saying Biden was paving the way for a supportive statement from Obama and others saying he had committed a "gaffe" by expressing a view that the president had not yet endorsed.

Trump mocks Buttigieg
In an hourlong rambling speech to Republican House members Thursday evening, Trump took several jabs at mocking Buttigieg. Trump said the South Bend mayor was "doing a rotten job running his own city," and he dismissed polls showing Buttigieg could beat Trump by two points in Texas. "I don't think so," said Trump. "I don't worry about that too much."

Trump also made fun of Buttigieg's last name, saying "nobody can pronounce this guy's name" and then he repeated "Boot-edge-edge." Trump followed that by pointing to his mid-chest and saying, "I've had him up to here," drawing laughter from the audience. Trump mocked Buttigieg before, including in a North Carolina rally in July. Two national polls in the past month have shown registered voters preferring Buttigieg to Trump by a margin of 4 to 9 points.