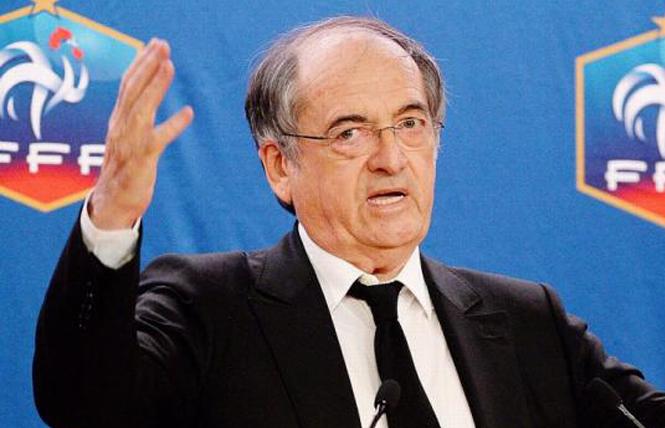 Leaders of FIFA, soccer's international governing body, have long gotten soccer fans accustomed to their habit of repeatedly taking one step forward for progress, then one step off a 35-foot cliff. Entertaining in a sick way, but not terribly healthy for anyone. I've gotta admit, however: the latest buffoonery in French soccer caught me completely off guard.

"I would not stop the games — I am totally against this," Noel Le Graet, president of the French Football Federation, said Tuesday, September 10, on the radio program France Info, doubling down on public comments he had been making for a week on his disdain for anti-homophobia measures. "I would stop a match if there are racist chants, that is clear."

In the course of the past month or so, a few matches have been briefly stopped as officials did their best to take down homophobic banners and stop homophobic chants in the top tier leagues of the FFF. (FFF is supposed to stand for French Football Federation, but whenever I see initials that include FF, my mind meanders through all sorts of alternative meanings. Under the circumstances we are about to discuss, feel free to indulge your creativity before progressing.)

The stoppages follow international soccer's much ballyhooed new efforts to rid public displays of racism, sexism, and homophobia at matches, using tools such as fines, banishments, suspensions, forfeits — and game stoppages. In line with that attempt to create a more welcoming and safer game environment for everyone, French referees were told this season they should stop matches so bigotry-fueled banners can be removed, chants hushed, and persistent agitators expelled.

A few matches were stopped while the inappropriate crowd behavior was addressed, and then the matches resumed a few minutes later. Team officials said all of the right things, fans were starting to get the message that maybe soccer organizations are serious this time about rejecting hate and intolerance, and the league was headed toward its goal where spectators were able to focus on the excitement of the match rather than the alcohol-emboldened, hate-driven fan next to them spewing spittle-laden toxicity.

Seemed to be going just fine. Then La Graet opened his yap to let us know the limits of his humanity. He said banners should be removed and chants ended, "But stopping a game? No. I would not stop the games. Totally against this."

"The position Le Graet has taken by differentiating between homophobia and racism is wrong," said French sports minister Roxana Maracineanu.

La Graet has no authority to order league referees to ignore rules — but his comments encourage and enable a homophobic culture that puts lives at risk. There is a latitude of discretion referees have to suspend play when the haters are hating, and now every time they think they should stop the action, they'll have to worry about drawing the ire of the top boss.

How self-unaware can a dude be? La Graet calls homophobia "absolutely wrong morally," says "it's not football but society in general that has to think about the problem, at school and in companies, everywhere" — but says nothing about why football needs to address racism but not homophobia, why one form of hate registers on his radar but the other does not.

La Graet spoke about the game stoppages at a more granular level last week, essentially saying that the quality of mercy was not only strained, but strained too often.

In newspaper interviews, La Graet said, "Matches have been stopped when they shouldn't have been. We will stop them if there is consistent homophobic abuse from the whole ground. But if among 30,000 people there are 2,000 imbeciles I don't see why the other 28,000 should be punished."

That's New Math applied to Zero Tolerance. What, only 10% of the crowd is chanting "Enculé!" (defined in the Urban Dictionary as a French slur to mean "a man fucked in the ass.")? Ahh, let er rip. We'll stop it once we reach a quorum. (And I think he should have said 2,001 imbeciles because, you know, you're allowed to vote for yourself.)

According to the British advocacy group Kick It Out, there were at least 20 instances of homophobic chants or banners at matches in France since the start of the season — just five weeks ago.

Among other things the federation president uttered in his campaign to make French football La Graet again was, "There are more important political issues."

Well, maybe not so much if you are gay and want to feel safe while enjoying a game — or if you have relatives or friends who are gay, or are aware of complete strangers whom you'd rather not see be put at risk. So no, they're aren't and this isn't supposed to be about ranking societal sins by priority.

"This crisis will resolve itself," La Graet said. "Did football invent homophobia?"

Football hooligans did not invent homophobia, but they certainly have elevated it to the highest decibel level possible, and the football establishment for decades has just hummed to itself while selling tickets and beers and doing nothing to stop the hate. So, no, it doesn't resolve itself.

(Side note: Imagine you had to get your medical advice from Noel La Graet, M.F. "Don't worry about that oozing mass covering your abdomen. There are more important things to worry about. We'll intervene when it gets into your upper torso and limbs.")

And, and for those of you who think games shouldn't be stopped so that the non-haters can sit back and enjoy the game? As a veteran of far too many American football games at the Coliseum in Los Angeles between the nomadic Los Angeles Raiders and whoever was in town that week, I can tell you when all of the ushers and security guards and cops and paramedics are rushing to deal with disruptive louts in the cheap(er) seats, the fans around them aren't watching the game. They're watching the action in the stands and praying it doesn't swing their way. Continuing to play a match while dealing with raucous, hateful behavior in the stands cheats both the players and the fans.

And that's the FFF truth.