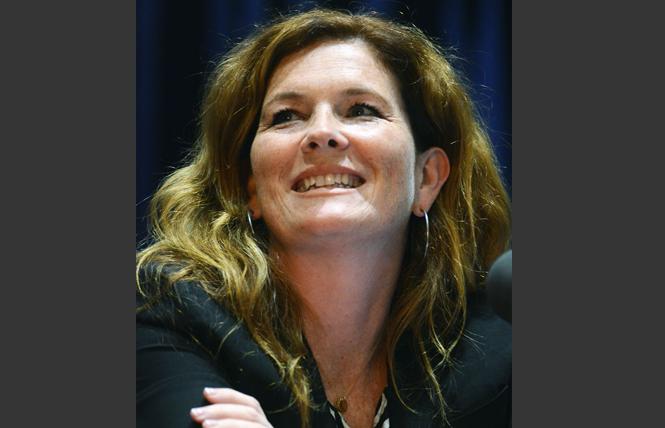 Editor's note: The Bay Area Reporter asked each of the four candidates for district attorney to write about why LGBTQ voters should choose them in the November election. This week, we feature Suzy Loftus and Nancy Tung. For pieces by Leif Dautch and Chesa Boudin go to http://www.ebar.com

We San Franciscans are blessed to live in a city that celebrates our rich diversity, where we find sanctuary with one another. Time and again in our modern civic history, our shared values of tolerance, progressive change, and principled resistance have made San Francisco a beacon of hope. And for no cause is that more famously or proudly true than for LGBTQ equality.

Yet for too many members of the LGBTQ community today, the struggle for equality goes beyond our decades of work to end discrimination and enlighten public attitudes. What's at stake for LGBTQ equality today is public safety imperatives for a community that is disproportionately — and increasingly — targeted by violence and other hate crimes.

Already in 2019, at least 17 transgender women have been killed in homicides nationwide, according to the Human Rights Campaign. Almost all of the victims have been transgender women of color. While statistics released in July by the California Attorney General's office showed a small, 3.3% decrease in reported anti-LGBTQ hate crimes statewide, national trends are alarmingly persistent: anti-LGBTQ hate crimes in the U.S. have increased every year since 2014, jumping by 17% most recently.

The troubling national and state numbers are reflected locally: a study by the San Francisco LGBT Community Center reported that 48% of LGBTQ San Franciscans experienced sexual violence in their lifetime. Fully 68% have experienced physical violence, and 81% faced harassment.

I believe the San Francisco District Attorney's office has a vitally important role to play in protecting our communities. As a prosecutor, I know that means working to reduce anti-LGBTQ violence by aggressively and appropriately prosecuting hate crimes. As a police commissioner and longtime community and youth advocate, I know it's also about leading change — forging community consensus around our shared values and public safety priorities.

As district attorney, I'll work in collaboration with the Board of Supervisors — particularly gay District 8 Supervisor Rafael Mandelman — to employ sexual orientation and gender identity data to better grasp how local government does and doesn't serve our LGBTQ community.

I'll create the first-ever Civil Rights Unit in the San Francisco D.A.'s office — and I'll hold it accountable for eliminating disparities in our criminal justice system among such factors as racial and gender identity, sexual orientation, religious affiliation, or disability.

I'll respond to the unacceptably disproportionate impact of homelessness on LGBTQ youth — which account for 46% of all homeless people under age 25, according to recently released city data. I'll expand the D.A.'s Victims Services Unit's role to better serve homeless youth who are too often targeted by violence. I'll support our city's first-of-its-kind shelter for transgender youth, and improve coordination with city departments and nonprofits to obtain shelter and services for homeless LGBTQ youth.

"Freedom is never really won," Coretta Scott King once said. "You earn it and win it in every generation."

Today's struggle for LGBTQ equality endures, and for too many LGBTQ San Franciscans, that's a fight for freedom from violence and hate crimes. I'll be a committed ally to earn and win that fight as your district attorney — for a San Francisco that's safer and more just for all our communities.