Online Extra: Updated: Campos to hold off on Shanti resolution 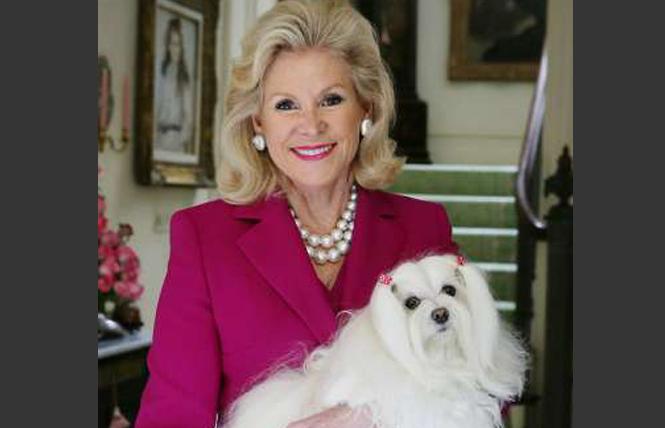 The head of the San Francisco Democratic Party told the Bay Area Reporter Wednesday that he will hold off for now on introducing a resolution demanding that Shanti rescind an award it plans to give philanthropist Dede Wilsey at its October gala.

Wilsey was listed as a co-host for a July fundraiser for President Donald Trump's re-election, prompting criticism of Shanti's decision this summer to present her with the award.

Campos, a gay man and former city supervisor, told the B.A.R. that he decided to postpone the resolution at the request of labor groups, who asked him to meet with Shanti leaders.

"They asked if I would postpone the resolution pending that meeting," Campos said, adding that he continues to have "serious concerns" over any group that honors Wilsey.

Campos' comments came a couple of hours after the head of the Shanti Project fired off a lengthy response to a request by Campos that the nonprofit rescind a lifetime achievement award it plans to give philanthropist Dede Wilsey at its October gala.

Wilsey came under fire in a Bay Area Reporter article last week, as well as subsequent press coverage, for being listed as a co-host for a fundraiser for President Donald Trump's re-election in July. This week, she told the San Francisco Chronicle that her name should not have been on the invitation.

Kaushik Roy, the executive director of Shanti, said in the statement that the organization, which helps people living with HIV/AIDS and other illnesses, could lose its tax-exempt status if it were to withdraw the award.

Campos, an attorney who once worked for the San Francisco Unified School District, said he wasn't sure about Shanti losing its tax-exempt status if it withdrew the award.

Nonetheless, Roy said he was concerned.

"The Shanti Project rejects what it calls the 'divisive, dangerous, and possibly illegal' demand by the local Democratic Party and its chair, former San Francisco supervisor David Campos, who now works as the deputy county executive of Santa Clara County," Roy said.

"We will not rescind the award — not only because it would be wrong, but because rescinding the award could possibly be seen by the IRS as Shanti punishing someone for making contributions to a political party. If this happened, IRS regulations mandate that we could lose our tax-exempt status," Roy added.

Initially, the award Wilsey was going to receive at the October 3 gala was called the Nancy Pelosi Lifetime Achievement Award. But as the B.A.R. reported last week, Pelosi, the Democratic House speaker who represents San Francisco, asked that her name be removed from the award. Roy said the agency would honor her request. On its website, it is now listed as the "Shanti Project Lifetime Achievement Award."

Wilsey has been a longtime supporter of Shanti's Pets Are Wonderful Support program, which the agency took over several years ago.

Wilsey was listed as a co-host for a cocktail reception and fundraiser for Trump in July, though the president himself did not attend. According to SFist, the major draw for donors was the opportunity to rub elbows with the president's eldest son, Donald Trump Jr., and his girlfriend, Kimberly Guilfoyle, a former TV host, attorney, and ex-wife of California Governor Gavin Newsom.

Trump named Wilsey's son, Trevor Traina, as ambassador to Austria in May 2018.

The San Francisco Democratic Party County Central Committee is expected to vote on a resolution demanding Shanti withdraw the award. Roy said he disagreed with that.

"Putting aside any legal issues, to rescind an award based upon who a person supports — or doesn't support politically — goes against everything Shanti stands for," Roy said in the statement.

Roy said that Campos this week refused to speak with the organization about his demand. Campos then unilaterally introduced a resolution that will be heard by Democrats, he said.

Roy said he vigorously disapproves of Trump and noted the last time Shanti had a gala, his remarks underscored how the Shanti nonprofit represents the values that this president and the White House do not.

The San Francisco socialite's known political contributions do not include any donations to the Trump campaign, according to OpenSecrets.org. Wilsey's last listed amount was a gift of $2,500 to the 2012 Senate campaign for Republican Charlie Summers, former Maine secretary of state. Summers ultimately lost his bid for a Senate seat to former Governor Angus King (I-Maine). Before that, Wilsey contributed to the 2000 Senate campaign of former Republican Congressman Tom Campbell, who was badly defeated that year by Feinstein.

Campos isn't the only person upset that Shanti is honoring Wilsey. As the B.A.R. noted in its story, Robert Strom, who's a client of the nonprofit, said he was "baffled" by the award going to Wilsey. But he said he wouldn't attend the gala anyway because of the $250 ticket price.