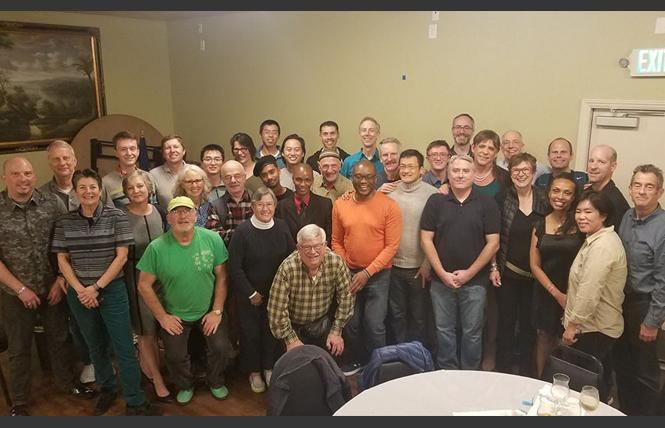 East Bay Front Runners and Walkers will hold its 15th annual Pride Run and Walk this year Saturday, October 12 — the day after National Coming Out Day.

The race event offers a 5-kilometer walk, and 5K and 10K runs, around Lake Merritt in Oakland.

The Bay Area is rich in LGBT-friendly running clubs, ranging from track and field clubs to those for diehard marathon and ultra marathon runners. East Bay Front Runners and Walkers is one of the clubs designed for road runners, serious or casual, who love to share their interest with others through the beautiful vistas the East Bay has to offer, then unwind over brunch and coffee.

Don Fritsche encountered the club in 2006.

"I was running marathons at the time and was looking for a gay running group," Fritsche, 56, told the Bay Area Reporter. "I thought San Francisco had the only one, but on the internet I found four in the Bay Area. I liked the idea I wouldn't have to drive to San Francisco. One Saturday I decided to go and I've never stopped going."

The club organizes weekly Saturday runs, followed by a meal at a local eatery. It is welcoming of casual runners and walkers as well as more serious racers. It also has a better gender balance than many clubs, with about 30% of its membership female. In addition to the runs and walks, the club gets together for potluck meals, movie nights, museum tours, ballgames, wine tastings, and weekend outings.

"At the time I joined, I was running about 20 marathons a year and was looking for something else," Fritsche said. "When I went, the president at the time was very friendly and came up and greeted me. They were super friendly and it was very welcoming. And then you get to know people and start making friends and it becomes like a second family. I liked that the people weren't too serious. I love the sport but I don't luuuuuuv the sport."

Friendly and welcoming, indeed. Fritsche fit in so rapidly he was elected an officer six months after joining and has been a club leader ever since. Currently he is the vice president, serving on the board of directors with club president Darlene Hall, treasurer Terry Hudson, secretary Ann House, and officer-at-large Wayne Ventus.

The club was founded in 1984 as part of the growing International Frontrunners movement. The 9 a.m. Saturday runs and walks rotate among six locations in Alameda, Oakland, Emeryville, Orinda, San Leandro, and Castro Valley. The walks are about three or four miles each and the runs usually vary from about three to eight miles.

Sliding annual club membership fees vary from $20 for seniors and students up to $36 for a household.

"My favorite course is probably the San Leandro Marina and Lake Chabot in Castro Valley," Fritsche said. "One is flat and by the Bay, and the other is hilly and inland. You can go to the website and check out the locations for a Saturday run. You don't have to pay for the first one."

This year's Pride Run and Walk will start at 9 a.m. at the Lake Merritt Boat House. Medals will be given to the top three placers in each event and rainbow socks and ribbons will be given to all finishers. Recent races have drawn around 150 to 190 entrants and this year, organizers are hoping to break the 200 mark. Online registration is open at www.eastbayfrontrunners.org and costs $25. That fee goes up to $30 the day of the race. Proceeds benefit the Pacific Center for Human Growth in Berkeley and the Oakland LGBTQ Community Center.

Kickoff time has not yet been announced.

Event tickets are available at http://www.calbears.com

Turkey bans LGBT sports festival
Organizers said this week that the third annual Queer Olympix, scheduled to be held last weekend in Istanbul, was canceled at the last minute by Turkish officials.

Volunteer organizer Elif Kaya told Agence France-Presse that when workers started to set up the event on Saturday, August 24, "We saw police and two water cannons. We were told that we did not have permission to do our event. They waited until the last minute to prevent us from appealing."

Soccer team Atletik Dildao confirmed the cancellation through its social media accounts, writing on Instagram, "This morning, we learned that our event Queer Olympix was banned by the Kad?köy district as a precaution against the provocations that may occur due to social sensitivities. The reason given is to prevent possible crimes, to protect public health, public order, and public morality in accordance with the law."

Atletik Dildao continued its protest on its Facebook page, writing, "We learned that if we do the long jump, it threatens public health, public order, and public morality. The decision was issued in the last minute while it could have been done anytime throughout the year."

Turkish authorities have been increasingly intolerant of LGBT rights in recent years. A Pride parade in Istanbul, which had been staged successfully since 2003, was banned starting in 2014. Organizers had anticipated 130 participants in sports from beach volleyball to soccer. Atletik Dildao said police followed participants gathered for the event back to their homes.

"All of this demonstrates one thing: These bans are to oppress us not only physically, but also psychologically, to ignore our efforts, and to reject our existence," the group said. "We invite the state to use its resources to prevent hate crimes instead of using it to prevent LGBTQ athletes from taking the field."