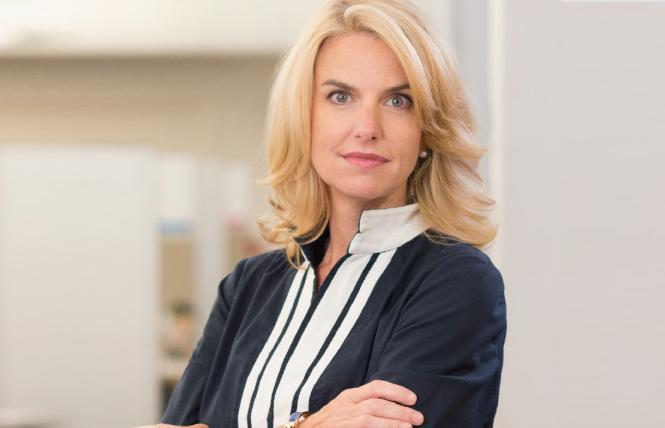 LGBT and allied organizations are often loathe to criticize one another, so it's noteworthy when it happens. Last week, HuffPost reported that leaders from the Human Rights Campaign, American Civil Liberties Union, National LGBTQ Task Force, National Center for Transgender Equality, and the Center for American Progress sent a joint letter to GLAAD president and CEO Sarah Kate Ellis imploring her organization to stop its campaign and fundraising for an LGBTQ constitutional amendment — basically an Equal Rights Amendment like the one that failed back in the 1970s, except this one would include sexual orientation and gender identity. GLAAD is promoting the idea, and, more importantly, raising money for it at the expense of a strategy that the other groups say is more realistic.

GLAAD first floated this idea in June 2018, in an op-ed in the Advocate written by Ellis. At the time we said it was a dumb plan and now, others agree.

Passing a constitutional amendment is exceedingly difficult. Of the 27 amendments that were ratified, the first 10 are commonly known as the Bill of Rights. The last amendment in 1992 was in regard to congressional compensation. In order to adopt an amendment Congress first has to pass it with a two-thirds vote, then it must garner support from three-fourths of the states, or 38. To be clear, Congress, with the Senate currently controlled by Republicans, will not pass an LGBTQ amendment. Even if Democrats manage to retake control after the 2020 election, it will likely be by a slim margin, meaning such an amendment could not muster the necessary super-majority vote.

Representatives from the five groups spoke with Ellis about their objections before they wrote their letter.

"While we certainly believe that the challenges facing the LGBTQ community require bold action, we also believe that advancing an amendment campaign is a harmful approach to our community," read the August 17 letter to Ellis, signed by executives at the five LGBTQ and progressive advocacy groups.

"As some of us discussed in a recent conversation with you, we have both process and substance concerns," continued the letter, which was leaked to HuffPost. "GLAAD's campaign has lacked meaningful engagement with the broader movement representing the LGBTQ community — particularly state and national organizations that would be responsible for doing the work to pass such an amendment — and presents a serious risk to the community's work at the state and federal level."

The five organizations asked that GLAAD not launch or cease engagement on the constitutional amendment campaign "to talk with us and key stakeholders about the campaign."

Aside from the political reality that an amendment would not pass, there are other, more harmful effects to consider, as HRC, ACLU, and the other groups noted. Powerful individuals or organizations hostile to civil rights want to amend the Constitution for their own purposes. Any serious push for an amendment likely would trigger the introduction of other amendments. Constitutional conventions, another, even more difficult way to amend the Constitution, open the door to potential amendments beyond the immediate topic at hand, the leaders wrote in their letter to Ellis.

Since Ellis started promoting the amendment, political calculations have changed. First, Democrats retook the House of Representatives in last November's midterm elections. Then, within months of the new session's start in January, Speaker Nancy Pelosi (D-San Francisco) managed to get the Equality Act passed in the House. This piece of legislation, not to be confused with the GLAAD constitutional amendment, would amend the 1964 Civil Rights Act to extend protections to include sexual orientation and gender identity. It's a new attempt to include federal protections for LGBT Americans after the yearslong failed efforts to pass the Employment Non-Discrimination Act. If Democrats keep control of the House, take back the Senate and President Donald Trump is voted out of office next year, there is a clear shot at seeing the Equality Act becoming the law of the land.

"For the last 10 years, national and state LGBTQ advocacy organizations have been doing the hard work of coalition building, relationship building with non-LGBTQ and civil rights organizations, community consultation, and electoral engagement to lay the groundwork for significant movement on landmark legislation, culminating in the historic passage of the Equality Act last spring through the U.S. House of Representatives," the LGBT groups' letter to Ellis stated. "The Equality Act would have broad, lifesaving and immediate impact in the daily lives of LGBTQ people, from governmental action to private employment and public spaces."

Right now, at the national level, the LGBTQ community needs to focus on ousting Trump and getting Democrats elected to the Senate. It's that simple. We need a Democratic president and Senate so that fair-minded people are nominated for federal judgeships and the Supreme Court. We don't need constitutional conventions where homophobes blather on about wedding cakes and who can buy them. We don't need our LGBT organizations — which, by the way, have budgets that pale in comparison to the National Rifle Association or the numerous Republican political action committees — spending resources on a perpetual campaign that has no chance of becoming reality.

Again, we ask Ellis and GLAAD to drop their work on a constitutional amendment. It does not appear to fall within GLAAD's mission of being a media watchdog, although we've argued it has sometimes strayed from this role to the point of irrelevance. GLAAD should cut its losses and work in support of the Equality Act; or, better yet, exit politics all together and stick to keeping an eye on popular culture and Hollywood.