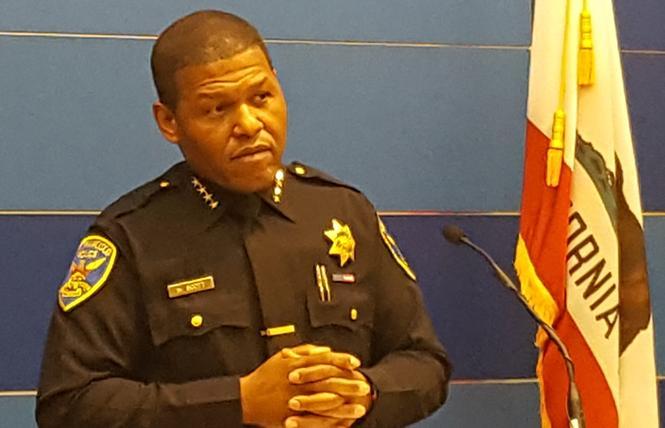 Glide church in the Tenderloin and the San Francisco Police Department will hold a reflection and reconciliation session Monday, August 26, timed to the 53rd anniversary of the Compton's Cafeteria riot.

The unusual event, described as a listening session, will include police Chief William Scott, members of his command staff, and department and community leaders, according to a news release sent Friday by SFPD.

Gene Compton's Cafeteria had been a popular hangout in the Tenderloin for members of the queer community. But one night in August 1966 — the exact date has been lost to history — the transgender women, hustlers, and queer youth who frequented the all-night eatery finally became fed up with routine harassment from the police, which sometimes included arrests for female impersonation.

A Bay Area Reporter article from 2006, the 40th anniversary of the riot, noted that after one young woman threw her coffee in an officer's face, a general melee ensued as drag queens beat cops with their purses, the cafeteria's plate glass window was smashed, and a corner newsstand was set on fire.

The Compton's riot was "the first known instance of collective militant queer resistance to police harassment in U.S. history," according to transgender historian Susan Stryker, who co-directed the Emmy Award-winning 2005 documentary "Screaming Queens."

SFPD acknowledged "unjust laws" that LGBTQs faced at the time.

"The 1966 Compton's Cafeteria riot inspired the LGBTQ liberation movement and highlighted unjust laws and the mistreatment of the LGBTQ community by law enforcement," the department's release stated.

Join us on Monday, Aug 26, 2019 @GLIDEsf for a Reflection and Reconciliation Session on the 53rd Anniversary of the Compton's Cafeteria Riot that inspired the #LGBTQ liberation movement. Visit the link for more info -> https://t.co/mfeXBdmjFi. #SFPD #SafetyWithRespect pic.twitter.com/exwBgMc8z9— San Francisco Police (@SFPD) August 20, 2019

The riot occurred three years before the landmark Stonewall riots in New York City, the 50th anniversary of which was observed in June.

According to SFPD's release, Monday's gathering is the first of a planned series of listening sessions and will provide a forum for LGBTQ community members to share their stories and offer ways to increase trust and communication with the police department.

Clair Farley, director of the city's Office of Transgender Initiatives, said it's important for SFPD to address the community.

"Glide is joining SFPD to hold this public forum to acknowledge the harm done to LGBTQ communities ranging from Compton's to raids to profiling and excessive force," she wrote in an email.

"This is an important first step, yet we know that strategies for community safety need to come from community," Farley added. "Systems of safety for our communities are about building economic empowerment, reliable healthcare, and stable housing. It involves a holistic approach centered in LGBTQ people's experiences."

Aria Sa'id, executive director of the Compton's Transgender Cultural District told the B.A.R. in an email that she believes the event is a "misstep."

She went on to explain that many people in the area live in abject poverty — "and are heavily policed and criminalized for being in poverty."

"We also can't ignore that the Compton's Cafeteria riot was in fact, a riot against police due to that same criminalization and mistreatment. While they are entitled to celebrate the rich history of transgender and queer uprising in the Tenderloin — they also have to acknowledge why it happened, and how the police operate in the same structure as it did in 1966.

"My personal belief is that the session should be highlighting how police will move toward de-escalation and linkage to support services rather than arrests in the Tenderloin," she added.

The Harvey Milk LGBTQ Democratic Club has called on San Francisco police leaders to offer a similar apology for its actions during the White Night riots and ACT UP demonstrations, when protesters were clubbed and arrested.

For decades, Glide has been at the forefront of advocating for vulnerable and marginalized communities. Its foundation provides many social services in the Tenderloin.

Monday's session, which is open to the public, takes place from 6:30 to 8:30 p.m. on the second floor of the Glide sanctuary, 330 Ellis Street. Attendees should use the Taylor Street entrance.

The evening will be livestreamed on SFPD's Facebook page and recorded for later broadcast on SFGovTV.

To view a video highlighting the event, click here.

Updated, 8/23/19: This article was updated to include comments from Aria Sa'id.

Updated, 8/24/19: This article was updated to include comments from Clair Farley.