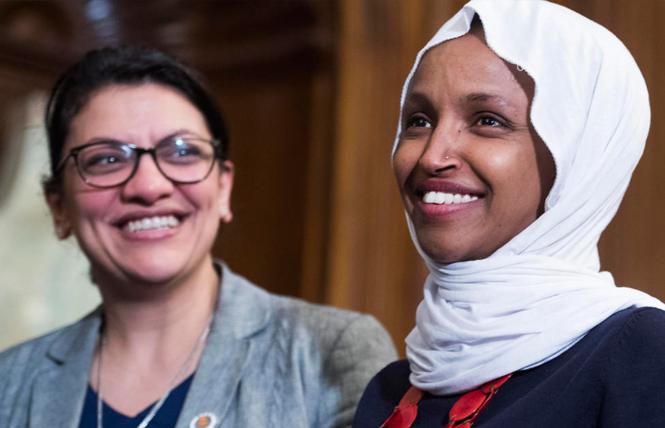 Last week, the Palestinian Authority banned a queer camp scheduled to happen in the West Bank at the end of this month and threatened to arrest the producers of the event and associates for breaking the law.

Around the same time the two Arab-American Democratic representatives were barred from traveling to Israel.

The travel ban followed President Donald Trump's tweet encouraging Israeli Prime Minister Benjamin Netanyahu to deny the congresswomen entry into the county during the forthcoming trip, which would have included Palestine, stating "it would show great weakness" if the country allowed them entry.

In tweets responding to conservative media, Omar, from Minnesota, criticized Netanyahu and Trump's ban as undemocratic and pinkwashing the Palestinian-Israeli conflict by conflating the two issues.

Pinkwashing is a term used to identify countries promoting themselves as LGBT-friendly to mask human rights violations.

"Pretending that this act somehow balances or mitigates Israel violating the dignity & rights of Palestinians — or undermines case for defending Palestinian rights — is deplorable!" she tweeted on August 19.

Omar has supported the LGBT community. In May, Newsweek reported, she introduced legislation to hold Brunei accountable for upholding Sharia law and instituting the death penalty for consensual same-sex relationships.

The following month she attended Twin Cities Pride in Minneapolis.

Omar tweeted the call to action issued by LGBT group, al-Qaws for Sexual & Gender Diversity in Palestinian Society, which was organizing the two-day event. Tlaib (Michigan) retweeted the tweet.

The organization asked supporters to recognize the connection between colonialism, patriarchy, and homophobia; to "steer clear of pinkwashing," to question singling out homophobic instances in Palestine and ignoring Israel's occupation of Palestine as a contributing factor to the oppression of Palestinian LGBTs; and other actions.

"Israel is a settler-colonial state that offers no rights to Palestinians, queer or otherwise," the group argued. "Our struggle as queer Palestinians is against Israeli colonialism as much as it is against homophobia and patriarchy in Palestine. Israel uses pinkwashing tactics to lie about 'saving' LGBTQ Palestinians from their society."

Al-Qaws' event, described as queer camp, is "harmful to the higher values and ideals of Palestinian society," Zreikat said.

The official added that the organization's event was "unrelated to religions and Palestinian traditions and customs, especially in the city of Nablus," a city about 30 miles from Jerusalem where the gathering was set to take place.

Unbeknownst to Palestinian officials, al-Qaws hosted another event in Nablus earlier this month, reported the Post.

Founded in 2001, al-Qaws, an LGBT Palestinian advocacy organization, has offices in east Jerusalem and Haifa.

The organization's mission is to provide a safe space for LGBT Palestinians to gather and explore gender and human sexuality.

Al-Qaws organizers expressed disappointment in the public knowledge of its event.

"The Palestinian police announcement about our activities is very unfortunate," the group told the Post. "It's very strange that they are accusing us of being a suspicious entity working to take part of Palestinian society."

Some members have received hundreds of hate messages and threats on social media and elsewhere since officials made the event public.

In 2014, Gareth Lee, a gay activist with QueerSpace in Belfast, Northern Ireland, paid in full when he ordered a cake for International Day Against Homophobia. Two days later, the bakery informed him that it couldn't make the cake because it went against the owners' religious beliefs.

Lee won his case, Lee v. Asher Bakery Company Ltd, when a Belfast court ruled in his favor in 2015. The case then went to the Supreme Court of the United Kingdom, where the five justices ruled in favor of the bakery owners in October 2018.

The owners, the McArthur family, are evangelical Christians.

The justices found that the bakery owners hadn't denied making the cake because Lee is gay, but because of the message supporting same-sex marriage on the cake.

They are arguing that the Supreme Court "failed to give appropriate weight to Mr. Lee's rights under the European Convention of Human Rights."

According to Pink News, the lawyers will challenge the concept that a business can have religious beliefs, not for the owners to have their right to hold private religious and political views.

"There is no such thing as a 'Christian business' and we contest that no such thing ought to be given legal recognition by a court," the lawyers said in a statement.

The so-called gay cake case isn't about the owners' religious beliefs and "has never been about" an individual's beliefs, he said.

"That's not what my case has ever been about," he continued. "This is about limited companies being somehow able to pick and choose which customers they will serve. It's such a dangerous precedent."

Lee's attorney, Ciaran Moynagh, one of Northern Ireland's leading human rights lawyers, expressed concern that last fall's ruling in the case sends the wrong message to businesses and company shareholders, allowing their "views trump the rights of its customers," he said.

Moynagh said the court blurred the lines and created legal uncertainty where there needs to be a hard line to protect against discrimination.

Simon Calvert, the deputy director of the Christian Institute, expressed disappointment about the challenge.

"I'm surprised and a little disappointed that anyone would want to overturn a ruling that protects gay business owners from being forced to promote views they don't share, just as much as it protects Christian business owners," he said in a statement. "I hope the government will robustly defend the current law."

The case has cost more than an estimated $600,000 (£500,000) to date, reported the Belfast Telegraph. The case is being funded by the Equality Commission and the Christian Institute.

A date hasn't been set for a hearing.