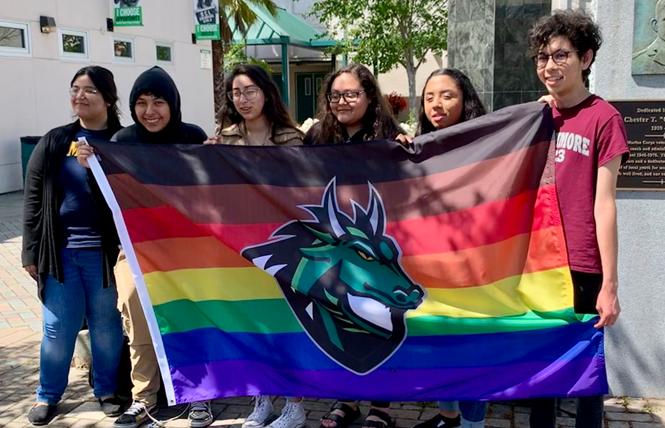 Participants in a youth leadership team show off the Pride flag they were able to fly at Sonoma Valley High School that includes the campus' dragon mascot. Holding up the flag, from left to right, are Maria Ramirez, Axel Sagrero, Itzel Montes, Maggie Castro, Michel Bernal, and José Valdivia.

During their junior year at Sonoma Valley High School José Valdivia joined the Gender Sexuality Awareness Club. At one of its meetings, a staffer from the nonprofit LGBTQ Connection came to talk to the high school students about its youth leadership teams.

The program piqued the interest of Valdivia, who during their sophomore year in 2016 came out as queer and uses gender-neutral pronouns. They were interested in the chance to meet and work with other queer youth in the area on a project that would benefit the local LGBT community.

The nine youth participants that semester landed on the idea to host a drag show and all-ages dance, which they called the Queer Rose Ball. Held at the Sonoma Valley Woman's Club, the free event attracted more than 70 people.

"We wanted to create an event for the community to come together for one night and be whoever you wanted to be, dance, and have fun. That was what the night was; it was amazing," recalled Valdivia, 17, who this month began their freshman year at Swarthmore College in Pennsylvania where they are studying, as of now, comparative literature. "I think it was our first real marker of showing Sonoma that LGBTQ youth are here, we are organizing, and we are doing things."

Providing LGBTQ youth leadership skills is a primary goal of LGBTQ Connection, a program of the nonprofit On The Move that provides services in Napa and Sonoma counties. It launched the youth leadership teams as a five-year pilot program in March 2017.

It received a $1 million grant from the California Reducing Disparities Project, which is funded through the Mental Health Services Act, to launch the program and evaluate its results over the five years. To date, more than 850 youth have benefited from the initiative, either by taking part in planning various projects or attending the events.

One of 35 grantees across the state funded by the disparities project, six of which are focused on the LGBT community, the hope is that the various programs can serve as models for other agencies to replicate, explained Napa resident Ian Stanley Posadas, 41, a gay man who grew up in the wine country city and is the founding director of LGBTQ Connection.

The agency offers the youth leadership teams at four locations in the North Bay counties. The main site is in Napa inside the VOICES Youth Center, with a second in Santa Rosa at a sibling youth center also called VOICES.

During both the fall and spring school semesters LGBTQ Connection recruits a cohort of youth, ages 14 to 24, for each of the four sites who work together on a project to benefit their local LGBTQ community. It is up to the youth to decide what that project will entail.

"Our staff person works with those youth to help them become a strong team and what is means to be a strong team working on issues important to them," explained Posadas. "They do a project that leaves a lasting change in their community."

And hopefully also has a positive impact on the participants. Valdivia told the Bay Area Reporter that the program allowed them to take on leadership roles in their community, as they became president of their GSA club during their senior year of high school. And through the youth leadership project, they advocated to have a Pride flag bearing their school's mascot, a dragon, be flown on campus this past May until the end of the school year.

Full circle
"It just felt like I had come full circle. Going into my freshman year I was a kid with so much anxiety, depression, and was so scared of being queer and at this high school. I was scared of being bullied, having already been bullied," said Valdivia. "I think I would have been out but I wouldn't have become the person I am today. I feel the youth leadership team did what it was supposed to do. It built up my leadership skills; I definitely feel like I am a leader now."

Napa resident Jude Orozco, 20, also credits the youth leadership program for providing him an opportunity to connect with other LGBTQ people their age. After graduating from high school in American Canyon, Orozco enrolled at Napa Valley College. At the same time he came out as a transgender man to his family and close friends.

For a class he took in 2017 Orozco landed an internship with LGBTQ Connection and learned about the youth leadership team program. He decided to apply for it not only as a way to meet other like-minded youth but also to give back to the community.

"In high school I had never been involved with anything in the community. I was super closeted and didn't even join any GSAs," said Orozco, who is studying psychology and wants to go into art therapy. "I really liked the idea of being with other people who I could relate to and just be open about who I was. At the same time it was not the only thing we talked about."

Orozco's team produced a conference that educated parents, teachers, and community members about LGBT issues. Each of the youth also addressed the nearly 100 attendees on the topic of trust, mostly related to their relationship with their families.

"It was the first time I ever spoke about anything really personal in front of so many people. The leadership team was so supportive. Because of it, I was able to do something like that," said Orozco, whose second project involved putting on a dance.

Utilizing the leadership skills he had gained, Orozco convinced LGBTQ Connection to hire him on as a youth advocate. He has used his part-time position to start a transgender support group.

The program is held after school, for the most part, said Posadas, and is set up in a way that even those youth still in the closet can feel safe participating in it. In addition to providing mental health benefits to the youth, the program aims to have a lasting impact on how the state and other entities provide mental health services.

To learn more about the youth leadership team program or apply, visit https://www.lgbtqconnection.org/youthleadership