Back to School: Rabbi is queering religion at Jesuit university 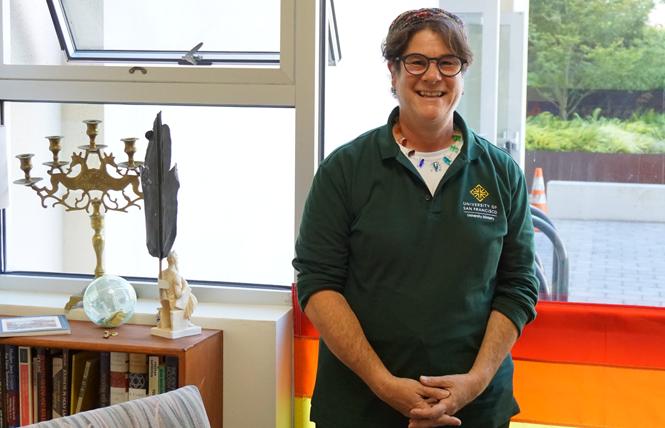 Rabbi Camille Shira Angel stands in her office at the University of San Francisco, where she is the first rabbi in residence. Photo: Meg Elison

The University of San Francisco has appointed its first-ever rabbi in residence.

Rabbi Camille Shira Angel accepted the position at the 164-year-old Jesuit institution early this month. She sat down with the Bay Area Reporter last week to discuss being a rabbi, an out lesbian, and what it means to "publicize the miracle."

Angel's office is in the University Ministry Building, as that body partially supports her position. However, the majority of the funding for her residence comes from the Swig Program in Jewish Studies and Social Justice, and she mentioned that first.

"I'm here thanks entirely to the financial generosity of the Swig program and that family of benefactors. I used to go to Camp Swig! Swig gave me my Jewish identity, so being the Swig rabbi in residence has a great deal of meaning for me," Angel said.

The Swig family is known across the Bay Area for its philanthropy, turning Manhattan and San Francisco real estate money into the Jewish Studies and Social Justice program at USF, among other endeavors. Camp Swig was one such offering until it was sold in 1998, moved to Camp Newman, and ultimately destroyed by wildfire in 2017.
Angel comes from an impressive background. As a ninth-generation rabbi, she made her name as a senior rabbi for 15 years at Congregation Sha'ar Zahav, the Bay Area's flagship queer synagogue. After that, Angel spent two years at the private Brandeis School in San Francisco, teaching social studies and Holocaust studies classes.

The rabbi has been partnered for five years to Wendy Brummer, a program manager for Pacific Gas & Electric Company. Angel has one child from a previous marriage.

Now, she's the first-ever rabbi in residence for the prominent Catholic university, where she's on a mission in queering religious studies for a diverse group of students every semester.

Aaron Hahn Tapper (brother to CNN's Jake Tapper), director of the Swig program, asked Angel to teach a class on LGBTQIA+ religion, and suggested that she use the word 'queer' in the class description, she recalled.

"There's no other class on campus that has that word in its title, and he figured it would be popular," Angel said.

Hahn Tapper confirmed that the class had been his idea. He also expressed his support of Angel.

"I have seen her work tirelessly in supporting USF students no matter their identities (Jewish, non-Jewish, queer, non-queer, etc.). She is a rabbi for the people, not for Jews only. And her passion with our students continuously energizes me to mirror such divine work," he wrote in an email.

Angel said the word "queer" has been a difficult one for many people over the years, including herself.

"The first assignment is to tell my students to figure out how to explain to their parents or a future employer why they took this class, why it's on their transcripts," Angel said.

One of her straight students told his Texan Pentecostal mother that he was taking a class in queering religion; her response was to ask whether he was trying to come out to her. Angel said that the student explained he was trying to learn to relate to people he had been brought up to think of as "other."

"At the same time, I want to locate that word in its awful history," Angel, 54, said, focusing for a moment on the word "queer." Angel herself is a lesbian and prefers that word to a more general term. However, she recognizes that younger generations prefer a less strict view of their own identity, in many cases.

Angel said that she associated the word "queer" with gay bashing incidents in the city's history.

"When I started at Sha'ar Zahav, I was told 'you cannot use the word 'queer' from the pulpit,'" she said. "But within just a few years, younger people in the congregation told me that was their word. A younger generation is reclaiming that word.

"Not all of my students in this class are queer-identified," Angel said, stressing that for many of her students, her teachings are the first positive experience they have at the intersection of queerness and religion.

"Many of my students come in with tremendous church hurt. The Human Rights Campaign has done some really great studies that show bisexual youth and Latinx youth, and what you can see that inevitably, the rates of suicidal thinking and mental health challenges are far higher for LGBTQ youth. Something like 70% of both groups have been hurt by a message from their faith community or a representative of their faith tradition," Angel said, referring to HRC's "Growing Up LGBT" and "Latino LGBT Youth" reports.

She said that she also learns from her students.

"Students bring in big learnings for me about indigenous contexts for gender and sexuality that existed before colonization," Angel said. "I can point to that within Judaism, in the Talmudic texts canonized in the fifth century. There's a variety of gender addressed, but it took until the late 20th and early 21st century for our indigenous stories about gender [to emerge]. They've been buried."

The rabbi said that these writings were suppressed and only rediscovered by young trans students and scholars, mentioning that there are currently four trans rabbis that she knows in the Bay Area.
Angel will teach "Queering Religion" for the next two terms at USF. She has been teaching there since 2017.

Angel is not sure how long her residency will last. When asked whether the funding provided for a year or more, she said that no limit has been placed on her position as yet.

"The idea is that I'm going to be here, god willing, for many years to come. I'm hoping to be here for the rest of my working career," she said.

Unusual job
However, her position is an unusual one. Angel opened up about what it's like to be both very visibly Jewish and visibly lesbian on a Catholic campus.

"I've had nothing but a warm welcome," she said. "For me to be here, in one of the greatest cities in the world, contributing to Catholic-Jewish dialogue, is really exciting."

"I'm not the only professor here who opens their classes with people stating their pronouns," she said with some satisfaction. "I'm seeing a lot of them adding their own to their email signatures."

Angel allowed that the fight for gender-neutral restrooms on campus has been a contentious one. At a recent gathering for new faculty held in the Gleeson Library at USF, she had the opportunity to confront resistance to that idea head-on.

Despite the updated signage indicating the all-gender status of the restrooms, Angel said the speaker informed the crowd of the locations of the men's and women's bathrooms.

"So at the first opportunity, I went to him," Angel recalled. "He had given us something to read that was a letter to [the late gay African American author] James Baldwin from his uncle. A beautiful piece of literature I had not encountered before. There's this phrase in it about 'an upheaval to our reality.' I said to him that this non-conforming and breaking the binary of gender is just that: an upheaval to our reality. I wanted to introduce to him the notion that when you let us know at the beginning of our day that there was a men's room and a women's room, he would do better in the future to say that we have an all-gender bathroom."

Angel was very careful in delivering anything like criticism. "We have these great policies. But the implementation of our great policies requires each of us to walk the walk," she noted.

When asked how the speaker, who she did not name, received that tip, she said, "I don't think he liked that."

While the rabbi plans to walk the walk, she was also aware of the symbolic power of her very visible presence in such an unexpected place.

"Sometimes I think I should be publicizing simply the miracle of being Jewish on a Catholic campus," she said, looking at her office's wealth of rainbow-colored artwork and a miniature of Michelangelo's statue of Moses where the Jewish prophet is depicted with horns.

Angel pointed out a brass menorah sitting in the window of her sunny office. She explained that in the Jewish tradition, it is not enough to simply light the candles as part of the ceremony, but that it must be a public act that is displayed to the community.