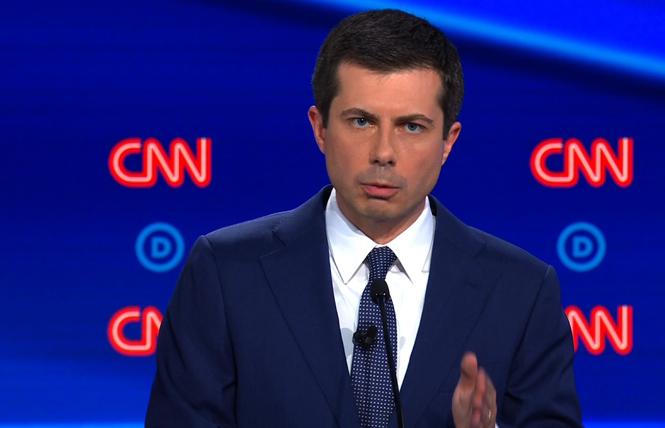 Gay South Bend, Indiana Mayor Pete Buttigieg was polling fifth out of 24 candidates going into the second round of Democratic presidential debates last week, and he was polling fifth coming out of those forums. But two remarks he made during the July 30 event in Detroit did seem to register some impact.

The first remark came in a discussion about the minimum wage. Buttigieg said, "So-called conservative Christian senators right now in the Senate are blocking a bill to raise the minimum wage when scripture says that whoever oppresses the poor taunts their maker." The remark drew the notice of numerous Christian websites, some of which applauded his willingness to quote from the Bible, and most of which criticized him.

A Harris Poll conducted right after the July 30-31 debates found that 66% of voters say religion is an important part of their lives, so Buttigieg's appeal to voters' religious sensibilities could work to his benefit, or backfire.

Buttigieg, an Episcopalian, has talked comfortably about his faith since entering the presidential field in January. During last Tuesday's debate, he referenced an Old Testament passage (Proverbs 14:31) to criticize senators who refuse to advance a bill to increase the federal minimum wage to $15 an hour.

"Believers across the political spectrum pay attention when a candidate evokes scripture," noted Christianity Today. The site reported that the number of internet searches for the Proverbs passage tripled on Bible Gateway right after Buttigieg's remark.

"This is not the first time that Buttigieg has tried to shame conservative Christians," said the Post. It noted that, in the first round of Democratic debates in June, Buttigieg remarked that it was hypocritical for the Republican Party to "cloak itself in the language of religion."

The conservative National Review was quick to point out that the city of South Bend "advertises numerous positions at pay rates below $15 an hour." It acknowledged that Buttigieg "pushed to raise" the city's hourly minimum wage from where it had been — the federal minimum of $7.25 — to $10.10 but suggested that was pandering.

"Nothing in the Bible dictates that Christians pay their employees whatever wage is arbitrarily chosen by politicians eager for votes," said the Review.

As a gay candidate, Buttigieg won't be worried about losing evangelical votes, but he does need to be concerned about garnering the support of those 66% of voters who say religion is important to their lives, observers believe. The Harris Poll suggests that he's got some work to do there. The poll surveyed 2,214 registered voters nationwide on July 31 and August 1 and asked, among many other things, "Which of the Democratic presidential candidates shares your values the most?" Only 10% chose Buttigieg.

Buttigieg's second notable remark in the CNN-hosted debates addressed concerns expressed by several candidates on the stage that the Democratic Party can't defeat President Donald Trump if it embraces ideas seen as too progressive or too left-leaning.

Buttigieg made the remark in the midst of a discussion about whether Democrats should push for "Medicare for all" or allow workers to keep their private health insurance. Buttigieg has a middle ground proposal: "Medicare for all who want it."

When the Harris survey asked voters "Is it more important that the Democrats nominate a presidential candidate with a strong chance of beating Donald Trump or that the Democrats nominate a presidential candidate who shares your position on issues?" they were deeply split. And when asked which Democrat has the best chance of beating Trump in November 2020, only 1% named Buttigieg. (Former Vice President Joseph R. Biden Jr. took the lead there, being named by 36%. Senator Bernie Sanders came in a distant second, with 11%.)

The second round of debates did not appear to affect Buttigieg's ranking. The Harris Poll broke out the responses of the 585 Democrats who participated in the survey and found that 4% were "most likely" going to vote for Buttigieg. While that sounds low, it kept him in fifth place. (Biden had 34%, followed by Sanders (17), Senator Kamala Harris (9), and Senator Elizabeth Warren (8).

The lagging name recognition might be related, to some degree, to his last name being difficult for some people to pronounce. His campaign has tried to overcome that by referring to the candidate as "Mayor Pete," a name the two-term mayor of South Bend urged his constituents to use, too. But surveys don't list that as an option.

Solid fifth place
A look at 13 national polls of Democrats or voters leaning Democratic, taken by seven different media polling groups prior to last week's debates, showed Buttigieg with a solid hold on fifth place. But some political commentators are beginning to ask whether he will be able to climb out of the single digits in the polling on a national basis. (He has garnered double-digit support in two of the early voting states: as high as 14% in Iowa and 15% in New Hampshire but is now polling at about 7% in Iowa and 7 to 10% in New Hampshire. A Monmouth University poll in South Carolina, released July 25, showed Buttigieg in fifth place with 5% support.)

The most recent national poll published before the second-round debate also showed Buttigieg in fifth place, with 6% of the support. That poll, taken by Quinnipiac University July 25-28 of 579 voters who identified as Democratic or leaning Democratic (5.1-point margin of error) showed Biden (34%) in first, followed by Warren (15), Harris (12), and Sanders (11). Buttigieg's closest contender below was, and has consistently been, O'Rourke (with 2%).

More national polling will be released in the next few days and weeks, and the next round of Democratic debates are just a month away. The criteria for participating in the third round are twice as high as the last: To qualify, the candidate must have 130,000 unique donors and poll at least 2% in four national surveys. Many pundits say the criteria are likely to eliminate half of the field from the crucial television opportunity. At deadline, only eight of the 24 have qualified to be on stage for that debate. Buttigieg is one of them.