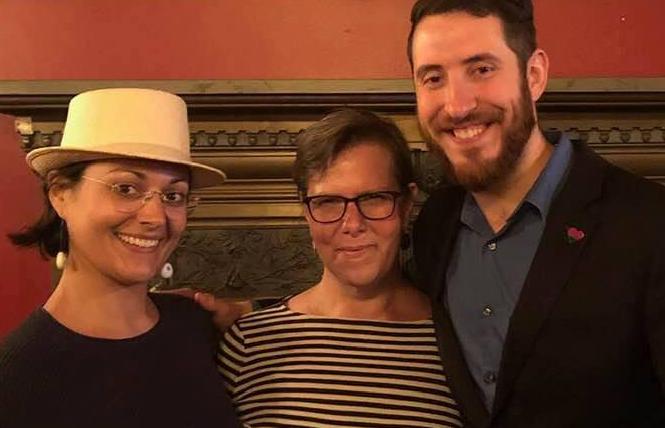 A new political club for polyamorous, queer, and kink Democrats is seeking to be officially chartered by local party officials next week. Started last year, the San Francisco Sex-Positive Democratic Club is believed to be the first of its kind in the country.

It will be going before the Democratic County Central Committee Wednesday, July 24, in hopes of becoming the 35th sanctioned club for Democrats in the city. Known as the DCCC for short, the oversight body for the San Francisco Democratic Party is responsible for chartering local Democratic clubs.

"I am not expecting us to have any real opposition," said campaign consultant Mark Press, 29, the new club's president and treasurer who is polyamorous and bisexual. "We are in the process of reaching out to members of the DCCC, letting them know what we are about, and asking if they have any questions for us."

San Francisco Democratic Party Chair David Campos, a gay man who was a former city supervisor, told the Bay Area Reporter he expects the club's charter request will be approved.

"What I understand from reviewing what has been presented is that they have met all the requirements for chartering and I expect they will get chartered," said Campos. "We welcome them into the San Francisco Democratic Party and look forward to working with them."

There are already two official LGBT Democratic clubs in the city, as well as ones for Jewish, black, Latino, and Asian Democrats, according to the list of official clubs on the local party's website . In order to seek chartership, a club has to have at least 20 members who are registered Democrats in the city of San Francisco.

"We have more than that," said Press, though he didn't know the total membership count when the B.A.R. spoke with him this week.

Any registered Democrat can join the club; they don't have to live in San Francisco to do so. Regular membership costs $25 a year, while a founding membership costs $100. The club, whose slogan is "Get In Bed With Us," also has a hardship level of $10 for those struggling financially and is willing to waive the fee on a case-by-case basis, said Press.

"We welcome all folks who believe the sex-positive community should be represented in government and the law," said Press, who has been involved in the BDSM/poly/queer communities for more than a decade, including hosting and managing public and private parties. "We are hoping to go advocate for non-monogamous folks, queer folks, sex workers, and the kink community."

The club already has filed with the IRS and local and state political watchdog officials in order to become an official political action committee, allowing it to raise money. To date, it has yet to report doing so with state officials.

"We are a functioning PAC, which is great," said Press.

In May last year the B.A.R.'s Political Notebook first reported about how members of the city's sex-positive community, from leathermen and women to those in polyamorous relationships, decided it was time they formally organized in order to exert political power at City Hall.

Their concerns run the gamut from protecting sex-positive venues and establishing the leather LGBT cultural district in the city's South of Market neighborhood to the creation of housing that can accommodate polyamorous families that need three bedrooms or more. A key goal for some would be seeing more housing built in SOMA, particularly in or near the leather district, so that people are closer to the venues that cater to the sex-positive community, though housing is not a part of the Sex-Positive Dems' policy platform at this time.

What the club is currently focused on, said Press, is seeing the city adopt a policy banning discrimination based on non-monogamous relationships. Even in San Francisco, noted Press, people fear losing their jobs or housing due to their relationship status.

The Sex-Positive Dems, as the club refers to itself for short, has taken steps to ensure the privacy of its members and leadership. In addition to Press, the club's board of directors includes four vice presidents and four other members, not all out, he said.

"We have made them a promise that they don't have to be out if they don't want to," said Press. "With some of the issues we deal with there is still a very present concern of discrimination."

The club is aiming to host monthly events, from social gatherings to policy forums, and quarterly membership meetings.

The issue came up last fall after the more progressive of San Francisco's two main LGBT political clubs held a special meeting in Oakland to vote on endorsing in races on the November ballot throughout Alameda County. Because the county's Democratic Party hasn't chartered the club, some viewed Milk's endorsements as illegitimate.

So far the Milk club has yet to officially seek doing so, though members who live in the East Bay are talking about it. Due to rising housing costs, many LGBTQ people have moved from San Francisco in recent years to Oakland and other cities throughout the region.

Current Milk club President Kevin Bard told the B.A.R. that he supports the idea and has been encouraging members who live in either Alameda or Contra Costa counties to take it on. There is no timeline, as of yet, for creating it, he said.

"As a board and membership we would have to determine what the process would be," he said. "Ideally, the membership would vote to allow for a chapter to come into existence."

During an interview this spring with the B.A.R., Oakland City Council President Rebecca Kaplan, a lesbian and currently the most prominent out elected progressive politician in the East Bay, expressed support for seeing the Milk club create a satellite chapter. Kaplan noted that many of the issues the Milk club is working to address, including mass incarceration, racial justice, economic equity, and the treatment of the homeless, are concerns she and others are tackling in the East Bay.

"I think it's a great idea," said Kaplan, whose current term in her at-large council seat expires next year.

Web Extra: For more queer political news, be sure to check http://www.ebar.com Monday mornings for Political Notes, the notebook's online companion. This week's column caught up on news regarding a trio of out Latino leaders in California.