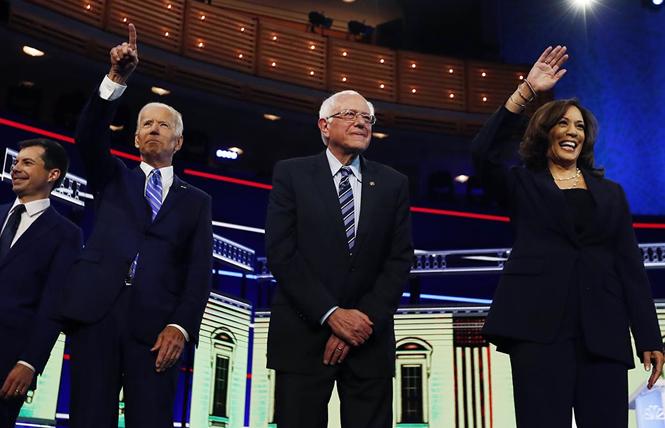 The first round of Democratic presidential debates appears to have put Senator Kamala Harris of California near the top of the 24-candidate heap.

It saw gay South Bend, Indiana Mayor Pete Buttigieg both winning points and taking hits for acknowledging his failure to adequately address racial tensions in his city. It saw frontrunner former Vice President Joe Biden stumble badly to explain his past positions regarding race. And it included some surprise acknowledgement of LGBT issues.

As the media dust began to settle, most political observers were declaring Harris the clear winner of the debates, which spanned four hours over two nights, with 10 candidates on the stage in Miami each night.

Harris scored points for shutting down a prolonged eruption of cross talking (Harris called it a "food fight") among several candidates and NBC moderator Jose Diaz-Balart in which nobody could successfully convey a thought. She racked up some more when she derided President Donald Trump's frequent boast of a "great economy," noting that not every family has stocks and many have to work two to three jobs to make ends meet.

But her big moment came when she tackled racism. She shared her personal experiences as a child and noted it was "hurtful" to hear Biden recently bragging about his success in the Senate working with "two United States senators who built their reputations and career on segregation of race in this country," said Harris.

"And it was not only that," said Harris, "but you also worked with them to oppose busing. And you know, there was a little girl in California who was part of the second class to integrate her public schools and she was bused to school every day. That little girl was me."

Biden tried to recover, saying, "I did not praise racists" then lurched into a discussion of his early career when he "left a good law firm to become a public defender" during rioting around the assassination of Dr. Martin Luther King Jr. (Harris is a former prosecutor.) Then he jumped to his time as vice president under President Barack Obama. When he finally got around to his opposition to busing, he said he felt the busing decision was one for city councils to make.

But Harris did not let go.

Buttigieg
Harris and two other candidates on the stage Thursday night — the second night of the debate — signaled their dissatisfaction with Buttigieg's supervision of police in South Bend. In talking about busing, Harris noted that, as California attorney general, "I was very proud to put in place a — a requirement that all my special agents would wear body cameras and keep those cameras on." (It was reported that the white officer who shot a black man to death in South Bend had his body camera turned off.)

Before that discussion, NBC moderator Rachel Maddow, a lesbian, had noted that, during Buttigieg's tenure as mayor of South Bend, there has been "a national debate over race and the criminal justice system, and yet the "police force in South Bend is now 6% black in a city that is 26% black."

"Why has that not improved over your two terms as mayor?" asked Maddow.

"Because I couldn't get it done," said Buttigieg. That honest acknowledgement of his failure to adequately address the problem seemed to win accolades from many political commentators after the debate. But during the forum, some of his fellow candidates criticized his shortcomings.

Former Colorado Governor John Hickenlooper asked, "Why is it taking so long?"

"We had a shooting when I first became mayor [of Denver] 10 years before Ferguson [police shooting and riots in Missouri], and the community came together and we created an office of the independent monitor — civilian oversight commission. We diversified the police force in two years. We actually did de-escalation training. I think the real question that America should be asking is why, five years after Ferguson, every city doesn't have this level of police accountability?"

When Buttigieg responded that Indiana law required an investigation and said, "there will be accountability for the officer involved," Swalwell interrupted.

"But you're the mayor," said Swalwell. "You should fire the chief if that's the policy and someone died."

Race and trans issues
During the first night of the debate, Wednesday, Senator Cory Booker of New Jersey spoke at length about violence against black transgender women in particular.

"We do not talk enough about trans Americans, especially African-American trans Americans ... and the incredibly high rates of murder right now," said Booker. "We don't talk enough about how many children — about 30 percent of LGBTQ kids — who do not go to school because of fear. It's not enough just to be [for] the Equality Act. I'm an original co-sponsor. We need to have a president that will fight to protect LGBTQ Americans every single day from violence in America."

Booker interjected his remarks spontaneously, in reaction to Congresswoman Tulsi Gabbard's (Hawaii) statements of support for the LGBT community. "Meet the Press" moderator Chuck Todd put Gabbard on the spot, asking her to explain why LGBT voters should trust her.

"One of the first things you did after launching your campaign was to issue an apology to the LGBT community about your past stances and statements on gay rights," said Todd. "After the Trump administration's rollbacks of civil rights protections for many in that community, why should voters in that community or voters that care about this issue in general trust you now?"

"There is no one in our government at any level who has the right to tell any American who they should be allowed to love or who they should be allowed to marry," replied Gabbard. "My record in Congress for over six years shows my commitment to fighting for LGBTQ equality. I serve on the Equality Caucus and recently voted for passage of the Equality Act.

"Maybe many people in this country can relate to the fact that I grew up in a socially conservative home, held views when I was very young that I no longer hold today," she added.

On the first night of debate, there were other mentions of LGBT people but only in passing. Former Housing and Urban Development secretary Julian Castro expressed support for transgender men in the context of reproductive freedom (he initially misspoke and said trans women but corrected himself the next day).

Senator Amy Klobuchar of Minnesota tried to draw a parallel between society's acceptance of same-sex marriage and the prospects for society to accept gun reform. Ohio Congressman Tim Ryan urged Democrats to avoid letting the Republican Party "divide us" based on "who's gay, who's straight, who's a man, who's a woman."