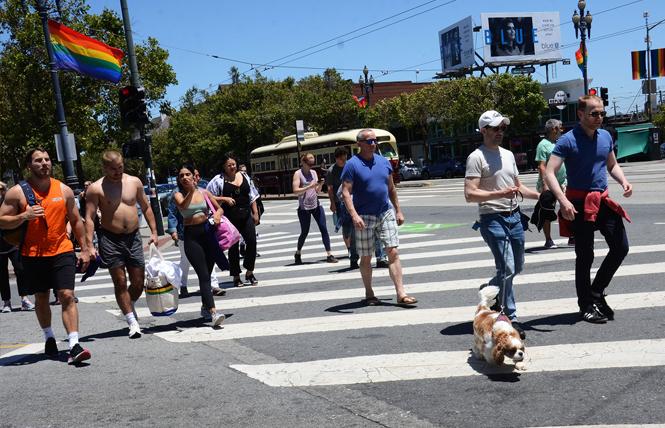 Pedestrians walk on Market Street at Noe, which will be part of the Castro LGBTQ Cultural District. Photo: Rick Gerharter

The Board of Supervisors unanimously approved the designation for the gayborhood at its June 25 meeting. Mayor London Breed is expected to sign it into law when it reaches her desk in July after the board votes a second time.

"The Castro has been recognized worldwide for half a century as a symbol of LGBTQ liberation and as an enclave for LGBTQ people to find safety, acceptance, and chosen family," stated gay District 8 Supervisor Rafael Mandelman, who represents the Castro at City Hall. "The Castro LGBTQ Cultural District will be an important tool to ensure that the Castro remains a vibrant LGBTQ neighborhood well into the future."

The other LGBTQ districts are in the Tenderloin, focused primarily on the transgender community, and South of Market, created to preserve the area's leather culture. Signage went up over the weekend to demarcate the boundaries of the Compton's Transgender Cultural District, while construction began this month on the Eagle Plaza on 12th Street, set to become a focal point for the leather district when it opens later this year.

The Castro LGBTQ district has been talked about for years, with efforts to establish it formally launched in February last year. In a statement to the Bay Area Reporter, as he was traveling this week, GLBT Historical Society Executive Director Terry Beswick hailed the board's vote in support of its creation.

"For many people around the world, San Francisco's Castro neighborhood is known as the center of the queer universe and has played a pivotal role in the advancement of LGBTQ culture and political power. It has also been a place of sanctuary and fellowship for LGBTQ residents, businesses and visitors," stated Beswick, whose nonprofit operates the GLBT Historical Society Museum in the heart of the Castro on 18th Street. "But the historic neighborhood is experiencing many of the same challenges and stresses as the rest of the city and urban centers around the country: gentrification and displacement, homelessness and income inequality, and loss of cultural and racial diversity."

The Mayor's Office of Housing and Community Development, with assistance from the community and city departments, will prepare a Cultural, History, Housing, and Economic Sustainability Strategy for the Castro district. That report is expected to be complete by June 30, 2021, while starting this year the Castro district proponents will be able to apply for a portion of the $3 million in dedicated funding for cultural districts created by the voter-approved Proposition E.

Beswick noted he mistakenly thought the district would be easily approved within a few months last year.

"Instead, I had the honor of facilitating numerous community meetings and committee meetings over the last 15 months, drafting legislation and setting priorities," he stated. "Ironically, now the real hard work begins, and I am hopeful that everyone will work together in a way that will make a real difference in creating the kind of thriving queer neighborhood we all want to see."