Jock Talk: Runner stands her ground after coming out 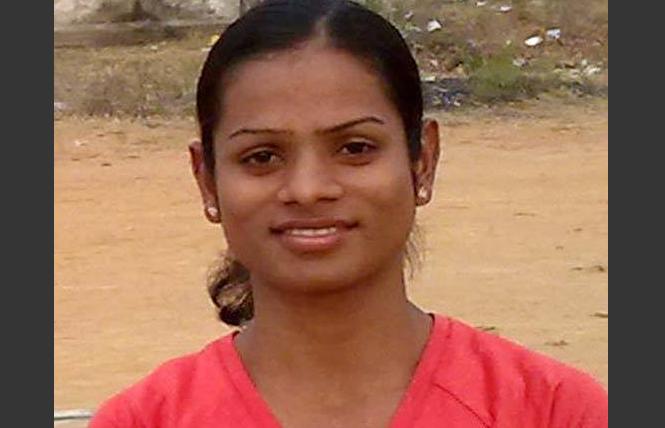 Runner Dutee Chand has stood her ground after coming out as lesbian.

It is said some are born to greatness while others have greatness thrust upon them. There is a third group, however, who are born to nothingness but achieve greatness through perseverance, purposeful focus, and gut-checking grit. With that in mind, let us take a moment this Pride Month to celebrate and appreciate the life of Dutee Chand.

Chand was born into a poor family in a poor village in the eastern part of India. Her father supported the family in their one-room apartment by hand-weaving saris. Her older sister, Saraswati, got her interested in running at the age of 10 and coached her for several years.

Of course, the global track world took note of the rising star — and not very kindly.

In 2014, Chand was abruptly dropped from India's Commonwealth Games team not because of any cheating or other malfeasance, but merely because her body produced a level of natural testosterone that affronted the sensibilities of the International Association of Athletics Federations.

Such individuals are referred to with clinical terms such as "different sexual development," "intersex" or "hyperandrogenism." But no matter the terminology, the fact remains they are women. Always have been, always will be. That is beyond dispute. It is easy and cold to discuss people as statistical objects when dismissing their importance or making them the subject of exclusion, but the reality remains that we are all of the same flesh and blood.

So Chand and her supporters took her case to court. In July 2015 the Court of Arbitration for Sport threw out the IAAF policy on hyperandrogenism because of lack of scientific evidence to support the ban. IAAF was given two years to come up with scientific proof and Chand was free to return to the track.

"These years have been extremely tough for me," Chand told the Indian Express. "The negativity, fear of my career ending prematurely, insensitive comments about my body — I have faced them all. I am extremely relieved that I can run fearlessly again, knowing that now my battle exists only on the track and not off it."

And for a good while that was true. Her fellow villagers celebrated when she won two bronze medals in the 2017 Asian track championships. The next year she won silver in the women's 100 meters at the 2018 Asian Games in Jakarta — India's first medal in that distance in 20 years — and added the silver in the same meet in the 200 meters. She is currently hoping to meet the national team for the 2020 Olympics in Tokyo.

Last year India decriminalized homosexual acts and Chand praised that decision. In May she revealed for the first time she was in a relationship with a woman she met in 2016.

"I have found someone who is my soulmate," Chand, 23, told the Express. "I have always supported the rights of those who want to be in a same-sex relationship. It is an individual person's choice. Currently, my focus is on the World Championships and the Olympic Games but in the future I would like to settle down with her. I have always believed that everyone should have the freedom to love. There is no greater emotion than love and it should not be denied."

But this was not an entirely voluntary decision for Chand. She said she disclosed her relationship because her sister, Saraswati, had told members of the news media about it. And shortly after Chand came out, villagers in Odisha reportedly dragged a 19-year-old woman out of her house, tied her to a tree and beat her, after discovering her in bed with another woman.

Suddenly, the family and village support she had been receiving turned chilly and hostile.

"It's humiliating for all of us," Prashant Behra, a fellow villager, complained to the press about Chand's revelation. "We have supported her all the way in her running, but we cannot accept this relationship. Marriage can only be between a man and a woman. She should never have talked about it to the whole world. She should stick to running."

Responded Chand, "It is going to take time for people in my village to get used to the idea. They don't know anything different from what tradition tells them so I am not angry with them. That doesn't mean to say I am not going to follow my heart. I can't spend my life worrying about others. No one can live without love."

Chand's mother, Akhuji, said, "I had been supporting her all along for her special interest in sports but we belong to a traditional weaver community, which does not permit such things. How can we face our relatives and society?"

Oh, I don't know. Maybe with a mother's love, or a neighbor's respect? Maybe by backing a person when she needs your support rather than merely cheering her achievements when they bring you a little vicarious but unearned glory?

Saraswati Chand said she believed her sister's coaching staff had urged her to come out in order to drive a wedge between the runner and her family for their own financial benefit. But Chand was having none of that and said she and her partner were determined to persevere and hold out for the healing to begin.

"I am not a child who blindly does what her parents say," she said. "I am grown up. I will spend my life with who I want, but I will also fulfill my responsibility to my family. I am giving my parents time. Gradually, when the noise dies down, they will come round. Even people in the village will eventually come round. My partner is also determined. She keeps telling me not to worry about what the world will say."

For now, Chand said her partner, whom she has not identified in order to avoid heightened public attention but whose parents support their relationship, has moved to the capital of Odisha, Bhubaneshwar, for the last two years of her university study.

"She isn't defying anyone — family or society — deliberately," athletes rights advocate Payoshni Mitra said of Chand. "She is simply saying this is who she is and what she wants."

Gay rugby fundraiser
San Francisco Fog Rugby will sponsor a beer bust fundraiser for the Portland Lumberjacks Saturday, June 15, from 5 to 7 p.m., at the Lookout bar, 3600 16th Street. The Fog took second in the International Gay Rugby West Coast regional recently hosted by the Lumberjacks, but the Lumberjacks said they were left with some unanticipated expenses.

"Being part of the gay rugby community means taking care of each other (after we bash each other on the pitch), so SF Fog is holding this fundraiser to help our sister team out," Fog president Rob Flores wrote to club supporters.

The fundraiser will feature Jell-O shots, raffles, and games.