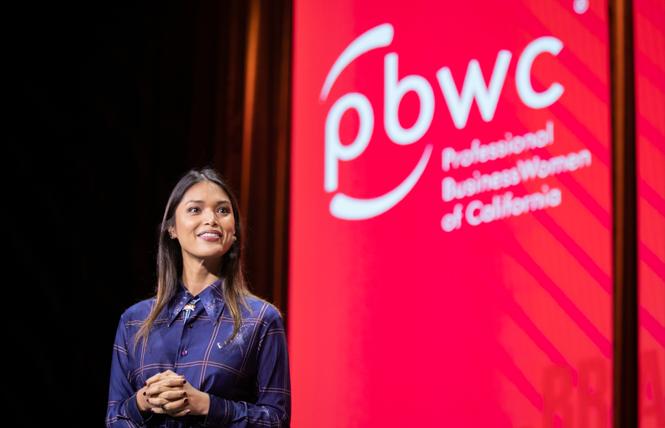 Rocero was at the conference, themed "Unstoppable," to speak about the power of storytelling and being a transgender feminist. An estimated 7,000 women attended the conference.

Rocero, 36, is definitely unstoppable. She's busy working on a book and producing new TV shows, she said, though she wasn't ready to discuss the details about the projects.

Since she came out during a presentation at the 2014 TED conference (LINK: https://www.ted.com/speakers/geena_rocero), Rocero has catapulted her career from magazine covers to global transgender policy adviser, advocate, and producer.

The TED talk was the first time she revealed her true self to the world, she said.

"I had enough," said Rocero. "The thought of living a double life and the paranoia that somebody would out me and it would ruin my career was getting too much. I was ready."

Rocero started her modeling career entering transgender beauty pageants as a teenager in the 1990s, first in the Philippines and later throughout Asia. In 2001, she moved to San Francisco to be with her family.

The move was a complete flip for Rocero. In the Philippines, transgender people are "culturally visible" in the community and mainstream TV, she said, but "not politically recognized."

"In the U.S., San Francisco specifically, it was the other way around," said Rocero, who underwent gender reassignment surgery in Thailand with the support of her family when she was 19. She was also able to legally change the gender marker on her government-issued documents and receive trans-specific health care. "There was a degree of political recognition ... but there was no mainstream visibility."

"That kind of paradox, growing up in the Philippines and moving to the U.S., really informed a lot of my advocacy and my policy research," said Rocero, who moved to New York in 2004 to pursue her modeling career.

Rocero turned her eye to media to bridge the gap between policy and transgender people's stories. Her first effort garnered her a GLAAD award for the Logo show "Beautiful as I Want to Be." The show matched transgender youth with successful transgender individuals as mentors.

Her TED talk has been viewed more than 3 million times and has been translated into 32 languages, according to the TED website.

"It was a powerful moment. It changed my life. It freed me because for so long I had always been myself, but I couldn't really fully be myself ... not fully living my most authentic self," she said.

Unbeknownst to her, she was on the cusp of a transgender entertainment revolution in the U.S. Several years ago, Laverne Cox became a breakout star on Netflix's "Orange is the New Black." Writer and producer Janet Mock wrote a best-seller. Jazz Jennings starred in "I Am Jazz." All helped bring transgender issues into the mainstream.

"I'm so lucky," said Rocero, acknowledging the support from her loving family. "I could live and give this love because I was given this love."

On the global stage
Rocero co-founded Gender Proud, an international transgender advocacy campaign for gender recognition policy, the same year she came out.

She focused her efforts mainly on gender marker and legal recognition by governments on official documents, working with the United Nations, White House, and State Department on international policy related to transgender rights.

For trans people, countries generally have five levels ranging from no legal gender recognition to self-declaration of gender. Many countries demand transgender people have surgery with forced sterilization, undergo two-year hormone therapy treatment, or be diagnosed with gender dysphoria in order to legally change their gender marker, she said.

Rocero quickly noticed that she found herself as the only transgender person at the table discussing gender policy.

"That's not a compliment," she said.

"I just found a disconnect on people making decisions on the lives of trans people, mostly trans people of color, globally or indigenous people," she said about how they had the statistics, but "they miss[ed] this nuanced, lived experience."

That prompted her to think of ways to "keep that door open" and how to invite more people and demand that more transgender people be at the table, as well as telling transgender people's stories through the power of media.

The current state of anti-LGBT politics around the world doesn't deter her despite the impact it has on LGBT communities.

"The violence against LGBT people, particularly transgender individuals, is directly related to the people at the top in governments ... demonizing trans people," Rocero said. "That speaks volume[s] to how trans people are being treated all over the U.S., all over the world."

She believes the attacks are "an opportunity to rise up."

"It's an opportunity to just be more unapologetic in our deeds and our project," she said.

"I value the transformative power of LGBTQI organizations," OutRight Executive Director Jessica Stern told guests who attended the May 10 event in San Francisco. "They connect you with communities and they make you safer."

She talked about the impact OutRight, founded in San Francisco as the International Gay and Lesbian Human Rights Commission in 1990, has had over the years.

The organization has published groundbreaking research documenting discrimination and persecution of LGBT people around the world, recommended solutions, and has held governments accountable for human rights abuses against LGBT people, Katie Hultquist, a lesbian who is OutRight's West Coast director, told the audience.

OutRight is the first and only LGBT organization to be granted consultative status at the United Nations.

Providing an example, Stern spoke about a report published last year that asked: How many LGBT organizations were legally registered?

"In all those countries, if you are running an LGBTQI organization you can face arrest, your organization can be banned, or something worse can happen to you," she said.

Being seen by an organization that advocates for you "that has a transformative impact on you," said Stern, adding that the report is reshaping how donors fund LGBT organizations and provide a pathway to prevent crises.

The organization operates on a nearly $3.5 million annual budget and raised $25,000 from the two events attended by more than 150 people.

TREAT is a transgender advocacy group in Zimbabwe.

The transgender Zimbabwean woman was granted asylum in the United States at the beginning of this year with OutRight's assistance after suffering years of harassment and assault by authorities in her homeland.

She is currently the director of HIV/AIDS prevention and outreach at Casa Ruby in Washington, D.C.

"All the work they do around the world is fantastic," Nathanson told the Bay Area Reporter. "They are really doing marvelous work."

Omair Paul, a 28-year-old gay man who attended the event while on vacation from New York, said OutRight's work is important.

"You may not know the nitty-gritty of the work [but] to be made aware of that work and also support it and interact," he said, is crucial.

Julie Dorf, a 54-year-old lesbian who founded OutRight, expressed hope for the future despite the current political climate around the world.

"In this incredibly globalized world there is just no doubt that the trend is in our direction," Dorf said at the event. "We are going to see progress continue everywhere. Outright is definitely the leading international NGO still to this day."

Meow, a 37-year-old lesbian whose parents are refugees from Laos and whose wife is from Thailand, believes the immigration issue is "a matter of urgency and many cases, life or death for our immigrant/migrant communities, inclusive of LGBTQI immigrants and migrants," she wrote to the B.A.R. in an email interview.

"LGBTQI people are still persecuted in many countries around the world. Having a much more supportive system to accept LGBTQI asylum seekers is necessary," wrote Meow.

"LGBTQI immigrants face not only the challenges of surviving in an anti-immigrant political environment, but also face discrimination in the immigration system," she wrote, adding "being placed in detention with the wrong gender, not having access to HIV/AIDS medication, and violence due to anti-LGBTQI discrimination," are examples of some challenges LGBT immigrants face.

Civil rights activist Karen Korematsu is keynoting the Immigrant Day of Visibility event on May 24.

Korematsu, the founder and current executive director of the Fred T. Korematsu Institute, will be joined by a panel of LGBT immigrants.

Fred T. Korematsu is the late Bay Area civil rights leader who stood up against the Japanese internment during World War II. Karen Korematsu is his daughter.

The panel includes Nepali metal-rock guitarist Flash, Thai Molam folk singer Tookta; and Russian singer Igor Chudak, who is a member of the LGBT Asylum Project's advisory council and will speak about issues at the border, family separation, transgender migrants, and the Muslim ban.