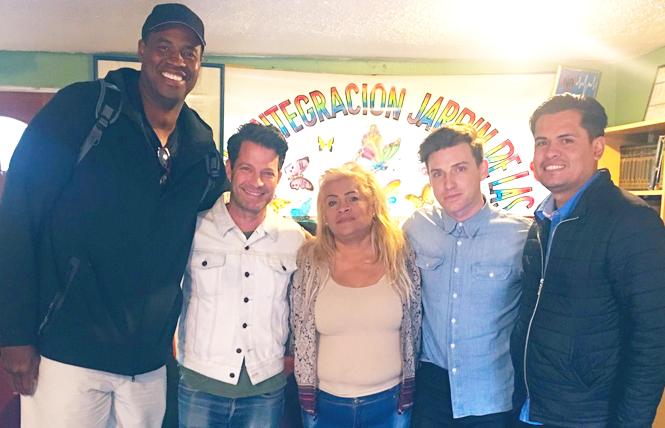 The new policy comes a week after Trump issued a separate memorandum targeting visa overstays in his attempt to sidestep Congress.

In early April, in a plan some politicians said will make matters worse, PBS NewsHour reported that Trump announced cuts in aid to El Salvador, Guatemala, and Honduras.

Trump's moves contrast with Newsom's actions. Since Newsom took office in January, he's said that California will remain a "sanctuary state" and proposed $25 million in California aid to asylum seekers.

His goals in El Salvador were to study the root causes bringing thousands of people to the U.S. border in an attempt to see if California can begin to stem the migration.

The reality
The White House's newest attack on the Central American migrants comes nearly two weeks after the first-ever LGBT delegation traveled to Mexico to visit Tijuana's only LGBT shelter, which was created after migrants first arrived in November.

"Immigration issues are LGBTQ issues," Equality California Executive Director Rick Zbur, who went on the fact-finding mission, said in a news release. "It's heartbreaking to know that our government continues to violate our own laws and values to deny them safety."

Celebrity design team Nate Berkus and his husband, Jeremiah Brent, of TLC's "Nate and Jeremiah by Design," and gay retired NBA star Jason Collins were among those who participated in the April 16 visit.

The trip was hosted by EQCA and the group This Is About Humanity. It was co-hosted by Border Angels at El Bordo (the Border) and the shelter La Embajada del Migrante/Undocumented Cafe, according to the EQCA release.

This Is About Humanity is a humanitarian organization focused on aiding migrants in Tijuana with basic needs and educating people about their experiences.

The trip was the sixth that the group has made since launching the project in 2018 and the first LGBT-focused trip. The trips are funded by donations from individuals, companies, and organizations through a fund at the International Community Foundation, organizers said.

The organizers' names aren't being published due to recent threats they said they received through social media.

Currently, there are about 34 queer migrants living at the Tijuana shelter, Casa Jardin de las Mariposas, the organizers said. They showed pictures to the B.A.R. of migrants sleeping on mattresses strewn on the floors of the four-bedroom house where they share a single bathroom.

The shelter doubles as a substance and narcotic abuse center.

The EQCA delegation met three migrants — who remained anonymous for their safety — who shared their stories.

One transgender woman said she fled Honduras after surviving sexual assault and years of serious threats from her family and gangs.

She "literally would be killed if she were to go back to her home country," said Collins, who said his family was the exact opposite of the woman's experience when he publicly came out in 2013. He was accepted and supported.

"If anyone would hear her story it would bring tears to your [eyes]. It would break your heart," he said.

A lesbian who arrived only 24 hours before the delegation's visit explained how she escaped a powerful gang that brutally raped her and was still pursuing her in Mexico, delegates said.

She said, "I just want to live," Collins recounted.

The delegation also visited Movimiento Juventud 2000 in the Zona Norte, where they handed out books and snacks to families and kids.

At the shelter for families, the group spoke with a family from El Salvador who lost everything — their home and business — to the gangs who targeted them for extortion and violence, Collins and Wiener recalled.

In Central America, from where many LGBT migrants are fleeing, they are not only searching for a better life, but also running for their lives. Like other migrants at the border, they are escaping gang violence, and economic and political instability, but also discrimination, persecution, and violence against them simply for being who they are.

Homosexuality isn't illegal in any of the Central American countries. Gender identity remains legally ambiguous in many of the countries.

"It's just absolutely heartbreaking," said Wiener, who has been following the situation in the news, but this was his first time he witnessed it. "You have people who were living great lives in Central America and then everything fell apart. They felt the need to flee. They are now living in shelters and tents and just trying to get into the U.S. so they can rebuild their lives, raise their families and be free."

Some people "have this notion that it's the bottom of the barrel who's making this trip, but it's not," added Collins.

The Honduran transgender woman they listened to was middle-class, Collins said. The problem was her brother, who was a gang member, "started extorting" her, then it led to sexual abuse, and "just living in constant fear," he recounted.

"The U.S. is treating [the asylum seekers] like garbage and the president is disparaging them and calling them criminals," Wiener said, expressing that the trip re-energized his commitment to help them. He said he is enraged that they are being depicted by Trump as "criminals" and "the worst of the worst."

"These are people who are good, hard-working, self-sustaining people who just want an opportunity to live their lives," Wiener continued.

The LGBT migrants' dreams have been halted at the U.S.-Mexico border for nearly half a year since the first caravan arrived in Tijuana last November. They've been stuck at various stages of the asylum process, which will soon become even harder if Trump gets his way.

The process is already so arduous for some queer migrants that they have returned to their home countries on their own, advocates said.

Earlier this year, Camila Diaz Cordova, a 31-year-old transgender Salvadorian woman, died after being deported back to El Salvador, according to Asociación Aspidh Arcoiris Trans, an advocacy group.

Last year, Roxsana Hernandez, a 33-year-old transgender woman from Honduras, died in Immigration and Customs Enforcement custody. The Transgender Law Center, based in Oakland, filed a claim against ICE for Hernandez's death in December.

Both women had stayed at Casa Jardin de las Mariposas, according to EQCA's release.

Mexico isn't necessarily a safe haven for the LGBT migrants despite recent legal changes. Homophobia continues to persist in the country, and queer migrants are still vulnerable to the long arm of Central America's gangs.

Still, more LGBT migrants continue to arrive and wait in anticipation and hope at the border.

"It's eye-opening. It's heartbreaking. It makes you realize how fortunate we are here in the states just by a matter of where we were born," said Collins.

The delegates also participated in a panel discussion with immigration lawyers from Immigration Defense, the San Diego LGBT Community Center, and the American Civil Liberties Union in San Diego to discuss immigration and the humanitarian crisis affecting both countries.

Moved to action
Wiener said there are things that can be done for LGBT asylum seekers "to make sure the needs of our own community are being supported."

Berkus and Brent were so moved by their experience during the trip they took immediate action, pledging to donate two years of rent for a larger shelter located in a safer place for the LGBT migrants as they prepare to start a new life in the U.S., Samuel Garrett-Pate, the communications director at EQCA, told the B.A.R.

"This experience stays with you," said Collins, expressing his gratitude for being able to be on the trip.

"You don't just move it to the back burner," said Collins, who is now an ambassador for NBA Cares, the nonprofit arm of the NBA. "We have to do something. We can't just turn a blind eye to people who are suffering when we have the means to help."

To donate to help the LGBTQI and other migrant shelters, visit https://donate.icfdn.org/npo/fundacion-internacional-de-la-comunidad-fund. Specify the donation is for honoree This is About Humanity at the International Community Foundation.

Alternatively, by purchasing a candle at www.thelittlemarket.com/products/candle-this-is-about-humanity?variant=12380486795299, 50% of the proceeds will be donated to support the shelters. Donations are tax deductible. Donations help with things such as paying rent, making capital improvements, buying groceries and toys, and other basic necessities.

To learn more about This Is About Humanity, visit www.thisisabouthumanity.com.

Canada is seeing a boom in LGBT asylum applications and its acceptance rate as thousands turn to the Great White North in the face of hostile anti-immigration, asylum, and refugee policies in the U.S., according to an AsylumConnect news release.

Since its founding, the digital resource has helped more than 10,000 unique users connect with verified LGBTQ- and asylum-friendly services in the U.S., according to the release.

"We have the technology to address this urgent need," said Katie Sgarro, co-founder and president of AsylumConnect, in the release. "With this expansion, we hope to fill the current information gap and connect the thousands of persecuted LGBTQ people seeking refuge in Canada with the safe local services that can help."