Guest Opinion: Coming out in prison 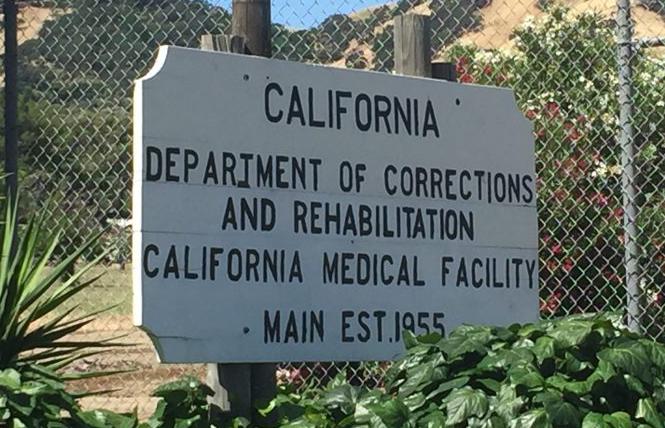 I live in an environment where the expression of my sexuality is against the law. The California Medical Facility in Vacaville is enlightened enough to offer free condoms to inmates, yet the use of them to have sex is specifically prohibited.

My stay in prison began 31 years ago in the fall of 1988. I was a methamphetamine-addicted, damaged, 18-year-old ticking time bomb hustling men on the streets of Palm Springs. I snapped one night and unleashed my shame-fueled rage on one of the men with whom I went home. I took a man's life and received a sentence of 16 years to life for second-degree murder.

I didn't believe that a soft, young, blonde-haired kid could survive California's violent, gang-ruled, racially toxic, virulently homophobic prison system, so I disappeared into a closet and welded the door shut.

Over the next 27 years, I found affection and human connection in secret — and that rarely. I hid who I truly was and went to extremes to prove that I was as ruthless, hateful, and vicious as those around me were. In the 1990s, I survived the Pelican Bay Security Housing Unit, or SHU, California's infamous supermax prison, with my sanity intact, largely because I found comfort in the arms of my cellmate.

For the next decade, I lived my lonely, secret life still convinced that it was too dangerous to display my authentic self to the world.

I began coming out in 2013 when I opened up to a psychologist. She assured me that nothing was wrong with me, yet it was hard medicine to swallow when out on the yard I still felt unsafe. I knew some people who were out; most were transgender women, it was certainly a lot harder for them to hide. However, I also knew a handful of openly gay men, and others who were partnered up with girlfriends — even some who were exclusively attached, prison-married. I envied their courage.

In 2016, I transferred to CMF and took the plunge. I came out in a men's support group after receiving a three-year parole denial. My heart pounded, my palms sweated, I could hardly catch my breath; in the end I received support and encouragement from everyone in the circle, even those who didn't agree with my lifestyle.

Since then, I've been on a mission to explore who I am. I came in as a teenager and adopted a series of false identities, so I found myself doing a lot of hard work in my 40s that should have been done in my 20s.

The hardest thing about being LGBT in prison is having to censor my behavior and suppress my feelings and needs. At times, it is emotional torture. Surrounded by openly hostile staff, bigotry, and hatred from other inmates, it's practically impossible to have anything close to a healthy relationship.

If l do happen to click with someone, we will have to live the fear of being caught, or separated by the system and transferred to opposite sides of the state, not to mention having to endure the daily slings and arrows of the homophobes.

However, it's not all darkness and depression. The occasional tryst, stolen kisses, the brush of a hand, sitting side-by-side with legs touching, a long, tension-filled exquisite moment looking into someone's eyes, pouring my heart out to someone who knows, all these are like air to a drowning person, made all the more poignant and heartbreaking for their rarity.

I am fortunate to be here at CMF where the environment is far less toxic than the other nine prisons I've been to; here I found a small LGBT community. We are like a family, and like all families, we have our moments. It's like living in a smaller town within a small town — everyone knows everyone's business. And, being honest, that business is often quite dramatic, after all, we are a creative and passionate people. We have a few support groups, and there are enough of us that I can usually find someone to talk to if I'm going through it.

I don't want to give the impression that everybody is part of the problem — it's the prison culture that supports and propagates the "might is right," heterosexist, bully-rich environment. There are many compassionate and supportive staff that find it possible to do their jobs while at the same time affirming the humanity of those whom they treat or guard. Likewise, there are inmates who don't support the culture of fear and violence — some are straight allies, others are accepting or tolerant of beliefs and lifestyles other than their own.