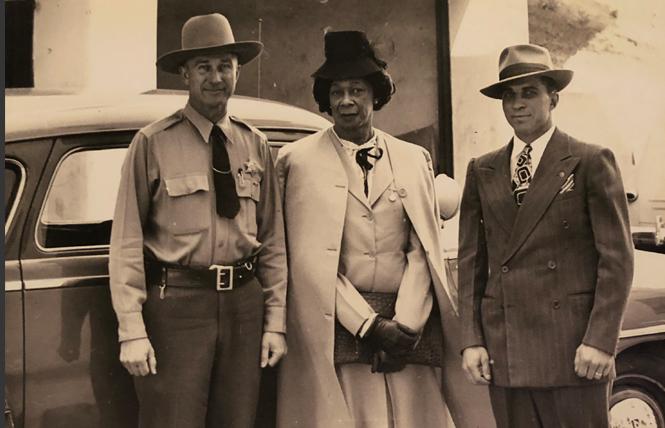 This image of Lucy Hicks Anderson, center, by an unknown photographer is part of the "Queer California: Untold Stories" exhibit now at the Oakland Museum of California. Photo: Courtesy the Museum of Ventura County Research Library

The black and white photo, at first glance, could be of any sharply dressed couple. The woman is adorned in her Sunday best and the gentleman sports a pinstripe suit.

They stand in front of a vehicle with bags packed for a trip, posing for the camera with a law enforcement officer. Their smiles, however, belie the legal nightmare the woman, Lucy Hicks Anderson, would face. (Neither of the men in the photo is identified.)

The socialite and entrepreneur thrived in Oxnard, California during the time of Prohibition. But Anderson, a black transgender woman who died in 1954, and her second husband were found guilty of fraud and imprisoned for signing a marriage license application that identified her as female.

The image and brief synopsis of her life — dated to 1945 — are included in a timeline of significant events in the history of California's LGBT community at the Oakland Museum of California's latest special exhibit titled "Queer California: Untold Stories." It is the first museum exhibition of its kind, according to the institution, and has been in the works for nearly a decade.

The show, up through August, "is affirming the identities, culture, and stories of the LGBTQ community when so many of those stories are under assault," said museum director and CEO Lori Fogarty during a press preview last week.

It aims to delve beyond the better known chapters of the Golden State's LGBT history to introduce museum visitors to events, places, and people like Anderson that they are likely unaware of, since only recently have schools begun to teach about such topics. The show intentionally puts an emphasis on women, transgender individuals, and people of color.

"We tell stories never told," said Christina Linden, 40, the exhibition curator who lives with her wife in San Francisco and is a professor of curatorial practice at the California College of the Arts. (She no longer works for the museum.)

For example, the show mentions the late San Francisco Supervisor Harvey Milk, arguably one of the most famous LGBT Californians, just twice. His historic victory in 1977 as the first gay person to win elective office in the state and his tragic assassination a year later are included in the timeline assembled on a wall in the last room of the exhibit.

The curators, said Linden, grappled with the question of what to leave out and what to include.

"A lot is left out of this show," said Linden, who was given the title Baroness Curator of the Imperial Court after mounting the Oakland museum's 2017 exhibit about the philanthropic drag group.

Devising a broader show about LGBT history had been talked about for close to a decade, recalled Linden, who started working on it three years ago. Throughout the exhibit the political — such as buttons from ballot measure campaigns of long ago — becomes the personal and the personal — a video montage featuring queer Native Americans — becomes the political.

"To me, the show as a whole is political," said Linden, "and long overdue at this museum."

One section is devoted to a museum within a museum — the Museum of Transgender Hirstory and Art — founded in 2013 by Chris E. Vargas. A transgender man who spent a decade living in Oakland as an artist, he moved to Bellingham, Washington in 2013 and is a professor in studio art at the local state university.

"This is the first time it has taken the semblance of an institutional look," said Vargas, 41, of the MOTHA installation, which features photos and ephemera from various transgender people and a wallpaper treatment he created from archival material.

One of the items featured is a copy of Cruise News and World Report from August 1966. It features a headline, "Young Homos Picket Compton's Restaurant," and a story about how 25 patrons of the eatery picketed the night of July 18 due to "physical and verbal abuse by both the management and the Pinkerton Special Officers assigned there."

It was a prelude to the riot that took place in August that year at the eatery, which Vargas also features in the MOTHA exhibit and is included in the larger exhibit's timeline. But neither reference to the event includes an exact date for it, which preceded the better known Stonewall riots that occurred 50 years ago this June. That has been lost to history, like so many stories about the LGBT community.

"There are gaps in archives," noted Vargas, "that make it so hard to tell transgender history."

The same can be said of LGBT history in general, something the show tries to address as much as possible within the space constraints and other limits the curators faced.

"This show proposes a future where everyone can feel safe and a sense of belonging," said Fogarty.

For more information about the museum and the exhibit, which costs $5 in addition to the $16 general admission ticket, visit http://museumca.org/exhibit/queer-california-untold-stories.

Trans commissioners win seats
The Board of Supervisors Tuesday seated transgender women on a pair of important oversight bodies in San Francisco that advise local lawmakers on a number of policy concerns.

At their meeting Tuesday, April 16, the supervisors approved Jessy Ruiz Navarro's appointment to the Immigrant Rights Commission for a term ending June 6, 2020. Navarro, who was born in Mexico, is the first transgender person to serve on the body and its first commissioner whose primary language isn't English.

San Francisco SRO Task Force commissioner Jordan Davis received another term for an indefinite time period. She is the only LGBT person on the body that addresses issues in the city's single-room-occupancy hotels, of which she is a resident.

Last week, Davis had taken to social media to voice concerns that District 3 Supervisor Aaron Peskin would block her appointment. But an aide to Peskin had told the B.A.R. that he would vote in support of the recommendation from the board's rules committee, which last week had endorsed the trans women in addition to a number of straight applicants for the oversight bodies.

As expected, Peskin voted with the other nine supervisors present to unanimously seat all of the applicants.

Milk terminal signage rules sent to SF mayor
The supervisors also voted Tuesday for a second and final time to adopt an ordinance regulating the appearance of the signage for the Harvey Milk Terminal throughout San Francisco International Airport. Mayor London Breed is now expected to sign it into law.

It requires that all of the signs for the Milk terminal use the name of the late gay supervisor and global icon for LGBT rights. It also instructs SFO officials to ensure Milk's name is given prominence on all of the exterior signs for the terminal, which is currently undergoing a years-long $2.4 billion renovation.

The legislative measure was in response to SFO officials wanting to use Milk's name sparingly on the signs for the first of the airport's three domestic terminals. Otherwise, they were concerned travelers would be confused and unable to navigate through the aviation facility.

LGBT leaders and advocates, however, grounded those plans, arguing the airport staff's concerns were unfounded. They noted other airports have successfully incorporated people's names into the wayfinding markers for their terminals.

Milk is the first LGBT person to be given such an aviation accolade. As noted above, he made history by becoming the first out gay person elected to public office in both San Francisco and California in November 1977 by winning a seat on the Board of Supervisors.

Tragically, he was killed 11 months after being sworn in as a supervisor inside City Hall along with then-mayor George Moscone by disgruntled former supervisor Dan White. A photomontage exhibit inside the Milk terminal will recount his life and achievements.

The first travelers to use the Milk terminal are expected to do so this summer when a portion of the facility reopens. The project is slated to be complete by 2024.

Web Extra: For more queer political news, be sure to check http://www.ebar.com Monday mornings for Political Notes, the notebook's online companion. This week's column reported on a list of small and medium sized cities ideal for LGBT retirees.