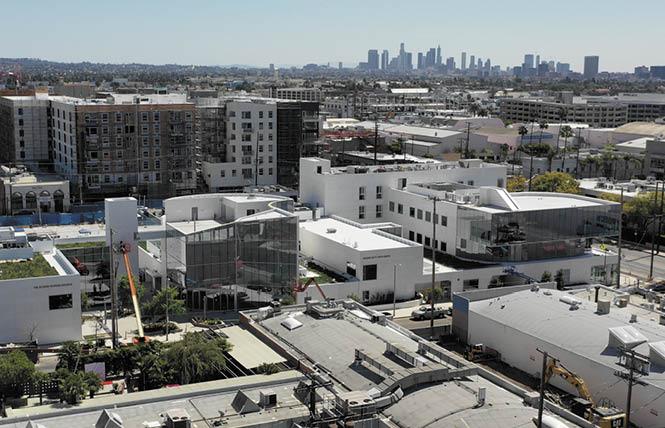 This month the Los Angeles LGBT Center opened its new two-acre Anita May Rosenstein Campus, which includes a new senior community center. And by summer of next year it will open the doors to 99 units of affordable housing for seniors at the $141 million complex.

The residents will live side-by-side with the homeless youth moving into 100 beds of housing that opened in early April. An additional 25 supportive housing apartments for youth will become available when the senior apartments are completed in mid-2020.

"Our campus is a beacon of hope and inspiration for people around the world," stated Rosenstein, a major donor to the project. "It is a safe haven for youth experiencing homelessness, and it will become a unique experience for youth and seniors to live together and learn from each other."

In San Francisco, 79 units of affordable housing aimed at LGBT seniors is set to open this month. The building at 95 Laguna is known as the Marcy Adelman and Jeanette Gurevitch Community; the couple co-founded LGBT senior services agency Openhouse.

The nonprofit teamed with affordable housing developer Mercy Housing to build the seven-story $40 million building. It is connected to the first phase of the project that saw 40 units open in 2016 in a renovated former college building on the northern edge of the city's gay Castro district.

For years LGBT advocates in the two cities have been working to address the needs of their LGBT older adult residents. Officials in San Diego, Sacramento, and San Jose also have, with senior housing projects aimed for LGBT older adults slated for the latter two and one already open in San Diego.

Yet none of the five municipalities landed on this year's annual list of America's top 20 cities for LGBT retirees compiled by the website SeniorAdvice.com. In 2018, Los Angeles came in 10th, San Diego 15th and San Francisco nabbed 17th while the gay retirement mecca of Palm Springs landed in fifth place.

Taking the top spot this year was New Orleans, "a city rivaling San Francisco with its abundance of gay-inclusiveness and year-round LGBTQ specific events," noted the website.

The 2019 list saw just one California city — Santa Ana in Orange County — make the cut. It has an LGBT center that opened in 1971 and is one of the oldest in the country, while the city has hosted a Pride festival since 1989.

It did note that, "there is still progress to be made with LGBTQ legislation in Santa Ana" where residents 65 and older account for 8 percent of the city's population of nearly 334,000 people.

The city's inclusion on the list, alongside other places not known as being LGBT havens like Bridgeport, Connecticut (#19) and Dayton, Ohio (#9), raised eyebrows among LGBT leaders in the Golden State.

"California, including San Francisco, offers so much for our LGBT community and for LGBT seniors," said gay state Senator Scott Wiener (D-San Francisco), who has focused on LGBT aging issues since serving on the Board of Supervisors in San Francisco. "California is a great place to be LGBT and to age as an LGBT person, particularly around community support, strong legal protections, and access to quality and culturally competent healthcare."

Nonetheless, Wiener told the Bay Area Reporter he was not surprised to see the dearth of California cities making this year's list compiled by the website.

"Where California falls short is the cost of housing, and the cities on this list are dominated by lower cost cities," he noted. "Housing affordability is a crucial issue for seniors, including seniors who rent and seniors who own and need different housing as they age. California's lack of housing affordability is a threat to our state's future — our economy, environment, diversity, and quality of life — and threatens the ability of seniors to gracefully age here."

Lori Thomas, the website's director of media and community relations, told the B.A.R. that the list was calculated this year to focus on smaller cities across the country that are an ideal location for LGBT seniors. And as Wiener pointed out, housing costs played a significant factor, she said, in determining which cities were included.

"This year we took the view of retirees wanting to move to live in a city. And so in San Francisco and other California cities, because the cost of living is so high there, they kind of fell a little bit further down the list this year," said Thomas in a phone interview. "We wanted to take into account this year smaller and medium size cities as well. We opened it up to those types of cities."

According to national surveys, the top 50 metropolitan areas have LGBTQ population averages of 4.5 percent. By 2050, the nation's entire senior population is expected to double, noted the website, "to an astonishing 88 million people aged 65 and older."

In 2017 SeniorAdvice.com began publishing a list of the top 20 places for LGBT seniors to live. As the population increases, the need for places welcoming to LGBT older adults will only grow, it noted.

"SeniorAdvice.com has been an invaluable resource for seniors, their family members, and caregivers," stated Ryan Patterson, the website's CEO and founder. "We're also very dedicated to diversity and inclusion, and we wanted to make sure we could assist members of the gay and lesbian community in finding the best locations for retirement and senior housing."

The website last year ranked the top LGBTQ senior living facilities in the country. It also has a tool called a senior score so that people can plug in any ZIP code from across the country to see how friendly that city is for seniors.

"It is a livability index for seniors," explained Thomas.

In California, lawmakers are moving forward on the creation of a statewide aging plan that, as the B.A.R. has reported, is expected to include the needs of the Golden State's LGBT community. Legislation introduced this year in the state Senate would require the governor to name an "aging czar" to oversee a 15-member task force that would be responsible for drafting the aging plan.

"Much work remains to make California more affordable, for seniors and for everyone else," stated Wiener. "We will continue to do that hard work."

Due to the Easter holiday, the Political Notes column will return Monday, April 29.