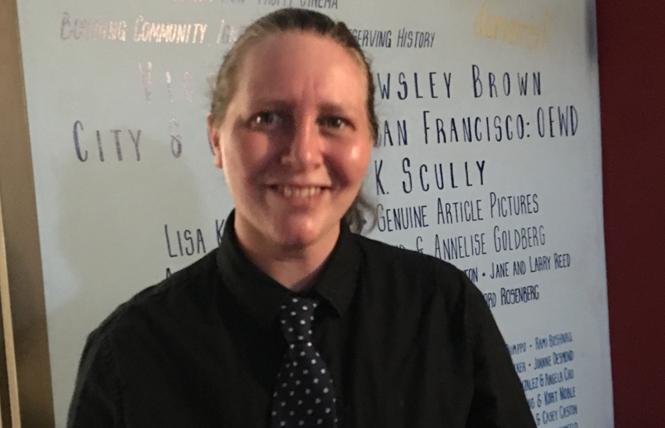 The Roxie Theater, San Francisco's longtime independent cinema, has hired its lesbian general manager as its next executive director.

The announcement of Lex Sloan was was made Tuesday, January 15, at an event at the Roxie. She started the job January 1.

Located in the heart of the Mission district at 3117 Valencia Street, the Roxie is one of the nation's oldest continually operating movie theaters. It specializes in independent films, frequently offering post-screening discussions with filmmakers.

Sloan, 36, replaces Elizabeth O'Malley, who has taken a job as managing director of SFFILM, the presenter of the San Francisco Film Festival. O'Malley will remain on the Roxie's board of directors.

Sloan, a filmmaker with a master of fine arts degree in cinema from San Francisco State University, came to the Roxie three and a half years ago after stints with Frameline, the LGBT film festival, and the San Francisco Green Film Festival.

"The Roxie has a long history of supporting the LGBT community with a wide rage of programming, as well as hosting both the Frameline Film Festival and the Transgender Film Festival from their inception," Sloan said in an interview at the Roxie earlier this month. "As we move forward, we are committed to this tradition."

Sloan's appointment comes on the heels of the Roxie's successful yearlong $60,000 fundraising drive to upgrade its smaller auditorium, the Little Roxie, with state-of-the-art cinema improvements, which were unveiled at a January 15 reception for supporters. The project included installation of a digital projector, 5.1 Dolby surround sound, and audio description headsets and captioning devices for ADA accessibility.

The board praised Sloan's selection.

"We are thrilled to have Lex Sloan's steadfast commitment to the Roxie leading us toward continued success in the years to come," said board President Diana Fuller. "Her passion for creating programs that serve our diverse community of local filmmakers and film audiences is essential to the Bay Area."

As executive director, Sloan will oversee the day-to-day operations of the Roxie and lead a strategy for organizational growth. She will be responsible for expanding the Roxie's community reach, deepening the Roxie's programming impact, and implementing programs that support local filmmakers, according to Fuller.

After years of revolving management and ownership, the Roxie received 501(c)3 nonprofit status 10 years ago. The independent cinema house "has doubled down on its iron-willed dedication to showcase the coolest/weirdest/most thought-provoking films of the past, present, and future," according to its website. The Roxie has a tax-deductible membership program, offering free or discounted prices for movies.

The Roxie has a budget of $1.4 million, according to Sloan, who declined to give her salary. The theater's 2016 Form 990 listed then-executive director Dave Cowen's salary at $23,743, with total revenue at $1.1 million. Total assets that year were listed on the Foundation Center's site at $333,647.