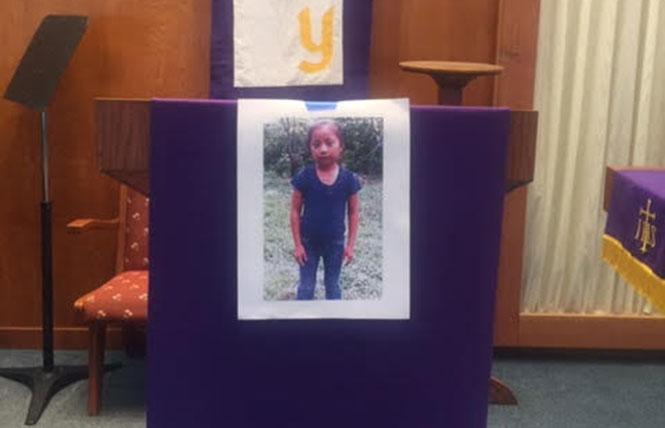 A photo of Jakelin Amei Rosmery Caal Maquin, who died in Customs and Border Patrol custody earlier this month, was displayed at the Island United Church in Foster City. Photo: Courtesy Jim Mitulski

Last week in church, we sang a Christmas carol, familiar to some, about providing a warm and safe place for a refugee child displaced by government and rendered temporarily without a home.

It's a children's song, a lullaby, and the sentiments aren't very sophisticated. A later verse asks the baby Jesus to "Bless all the dear children in thy tender care."

Whether or not we observe this season as a religious holiday, it isn't hard to find images of Jesus and his parents, Mary and Joseph, everywhere: in stores, on lawns, outside churches, sometimes even in public spaces. This year, I am feeling mocked by these images — rather than comforted — because it seems easier to love our sentimental image of this family instead of loving modern immigrant families whose situations parallel the one in the Christmas story. Even the many ways that the season is observed in secular ways as a time of honoring children do not seem as concerned with the plight of families exercising the human right of migration.

I recognize that not everyone celebrates Christmas — and certainly not as a religious holiday. My concern is that we are immersed, willingly or not, in the stories, the images, the songs, the decorations that tell the Christmas story without awakening in us an awareness of what the characters are telling us.

I just relocated back to the Bay Area last month. But for the prior months since the summer, I had been gathering every Wednesday for a half-hour protest, vigil, and demonstration on the town square in Needham, Massachusetts where I had been working. We started meeting shortly after U.S. District Court Judge Dana Sabraw issued an injunction against the family separation policy that had begun earlier under the Trump administration. In order to discourage migrants from Central American countries from seeking refuge or asylum by presenting themselves at the Southern border, about 2,400 children were routinely separated from their parents, with no plan on how to reunite the families. So, we gathered each week to demand that every child be reunited and to draw attention in a public place to the ongoing plight of immigrants. Anywhere from 20 to 80 people were present each week, depending on the week, as we made our public witness in our little town in Massachusetts. We were all involved in other things too, but this was our commitment: to pressure our elected officials, to educate and raise consciousness, and to raise funds for families through groups like http://www.RAICES.org. We gathered to refute President Donald Trump's statement that "The United States will not be a migrant camp and it will not be a refugee holding facility. ... Not on my watch."

Only 92 percent of the children have been reunited with their families; some may never be. We gathered so that we ourselves would not forget these children. One week, when the number of children not yet reunited was 555, we just counted from one to 555 to remind us of how many children were still lost in the system. It took 10 minutes just to count and it seared into our spirits a different perspective on the world. Our weekly protests may not have changed public policy, but here is how it has changed me.

Now when I hear the familiar Christmas carols, when I see mangers and nativity statues, I am not content to think only about a family 2,000 years ago. And when I tell the Christmas story, I stress the political as well as the spiritual aspects. Mary, Joseph, and Jesus were undomiciled as Mary was giving birth. Later they fled for their lives — without papers or documentation — to Egypt to escape violence and corruption. Had they not left and become asylum seekers and refugees, Jesus would surely have been killed.

And here's the child I care as much about now. On December 6, 7-year-old Jakelin Amei Rosmery Caal Maquin tried to cross the U.S. border in the care of her father in a small caravan from Guatemala. On December 7, Jakelin died in the custody of Customs and Border Protection from dehydration. What if she had been greeted with a welcome rather than detained as a criminal? If she had gotten medical care immediately, she would still be alive. Attempting to distract attention from this tragedy, government officials have cited the dangers of the journey as a reason people should not be traveling to seek asylum or refuge. Such a response is reminiscent of the same rhetoric used to blame people with HIV/AIDS as being somehow at fault for their situation. We are all culpable in Jakelin's death and we must address the issues about why people are seeking refuge here and re-examine and refashion our strategy to one of welcome and inclusion. The generous Christmas spirit that we strive for in this season calls us out and demands that we provide sanctuary, not prison. (An 8-year-old Guatemalan boy died in U.S. custody on Christmas Eve.)

We hung a picture of Jakelin in our church in Foster City on a recent Sunday. We repeated her name out loud. There is no celebration of the baby Jesus without acknowledging our role in her death and committing to the well-being of children and adults who turn to us in need.

This Christmas season especially, we need cradles, not cages. And the angels are singing a new song this year. They are tired of singing "Gloria in excelsis Deo." They offer a new kind of Christmas carol, and they invite us to join the chorus:

"No Hate! No Fear! Immigrants are welcome here!

No hate! No fear! Immigrants are welcome here."

The Reverend Jim Mitulski is the major gifts officer for the Center for LGBTQ and Gender Studies at the Pacific School of Religion in Berkeley and the interim pastor of Island United Church United Church of Christ in Foster City.