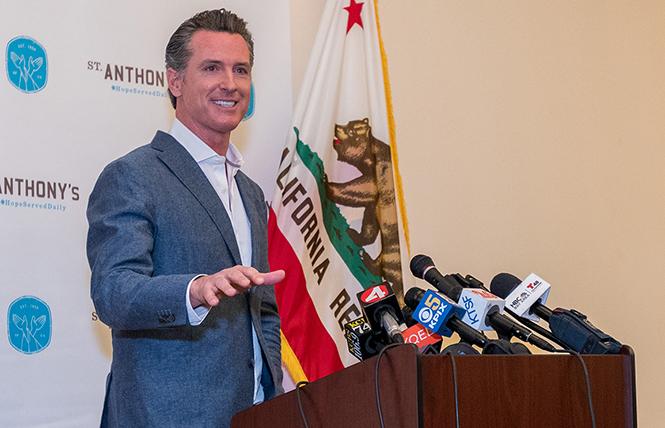 Outgoing Governor Jerry Brown has been great on LGBT issues, but there is more to be done. We would like Governor-elect Gavin Newsom and his team to give serious thought to the following items.

HIV/AIDS
The California Department of Public Health needs a new leader and a renewed focus on HIV/AIDS. For too many years, the agency has not done all it could. For example, while a statewide Getting to Zero initiative was unveiled in 2016, not much has actually been done to accomplish the priorities of getting people into early treatment, making PrEP more widely available, and ending the stigma around HIV/AIDS, all of which will help lead to fewer HIV transmissions. The department's AIDS Office is seen as a key part of the plan, yet its new director couldn't be bothered with answering our questions upon her appointment in August. Starting next year, Newsom should name CADPH and AIDS Office heads who will implement the nearly 100-page document, which includes a section on PrEP utilization. More outreach must be done to get local health agencies on board.

There must be more engagement with minority communities so that HIV-negative men who have sex with men can get on PrEP. The regimen is extremely effective if taken as prescribed, yet, as we have reported for years, disparities remain among people of color, especially African-Americans. This must change.

A few weeks ago, the National Black Justice Coalition pointed out the disproportionate impact of the epidemic on black communities. "It is not the case that black people engage in riskier sexual behavior nor can we blame increases in rates on myths about brothers on the down low," NBJC Executive Director David Johns said in a statement. "Black people are disproportionately impacted because of racism and systems set up to deny us access to health care, preventive medicine like PrEP, and stigma, which forces many to avoid being tested or engaging in conversations about sexual health."

Ace Robinson, the South Los Angeles HIV commissioner, wrote in an op-ed for the Bay Area Reporter that communities of color need to hear messages directed at them that they can relate to. A new approach must be attempted in California so that all residents are empowered to seek better health care and learn about the importance of PrEP. One such move toward this goal, which is not in Newsom's control, is naming black members to senior positions in HIV/AIDS organizations so they can lobby lawmakers and the governor's office and explain what would constitute effective programs for their community. Every person who wants PrEP should be able to get it, even if they can't afford it.

Safe injection sites
It's unfortunate that Brown vetoed Senate Bill 186 this year, because now San Francisco will likely have to wait another year before it can open a safe injection pilot program. Brown's veto message suggested that he didn't understand the need for such a facility, and we think Newsom, a former mayor of San Francisco, does. We expect gay state Senator Scott Wiener (D-San Francisco) to try again, and all signs point to Newsom signing such legislation, as he told reporters in October that he disagreed with Brown on this issue. Mayor London Breed and health advocates are already educating the public about the need for the pilot program, and that should continue while a new bill is debated. Safe injection sites will help decrease the number of people shooting up in public, but, more importantly, offer an entry point into seeking medical care and addiction treatment.

Education
It goes without saying that state public schools need more resources, and some of that money needs to be spent on teacher training to support LGBTQ students and address bullying and harassment for all pupils. Kids are coming out at younger ages, as Newsom well knows, and they need help in navigating what can often be a stressful environment. Even in California, trans students are singled out because of their gender identity by teachers or administrators, and this needs to stop. The state needs to provide funding to implement existing policies, and Newsom should sign education bills that will help promote this.

Hiring
Daniel Zingale, a gay man who was recently named to Newsom's communication's team, suggested shortly after the election that Newsom hire LGBT people for state jobs. We agree. While Zingale took a tongue-in-cheek approach, writing online that Newsom "consider applicants who are trans" as he fills vacancies at Caltrans, he also suggested that LGBT people be considered for other jobs. It's affirming to see oneself reflected in state government, and the message such hiring would send to LGBTQ young people cannot be overstated.

Boards and commissions
Thousands of Californians serve on numerous state boards and commissions, and we want Newsom to increase the representation of LGBT members, especially people of color and trans people. These jobs are often unpaid but are a good way for interested people to become involved in state government and help shape policy recommendations. When he was mayor, Newsom named many LGBTs to city posts, and we want him to continue that when he becomes governor.