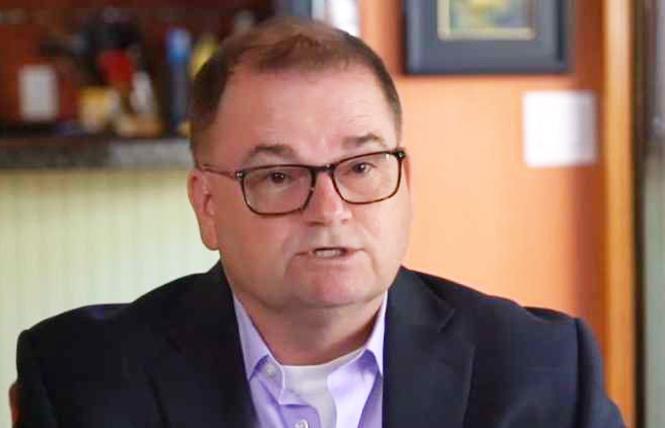 During his 20-plus years with the California Highway Patrol Jay Brome, a gay man, was asked by his superior to take off his skirt and start acting like a man, called a faggot, and even had a gun held to his head by someone who threatened to kill him if he admitted to being gay. After decades of discrimination in three different CHP offices in the Bay Area, Brome is suing.

"I think of these instances every day of my life," Brome, 54, told the Bay Area Reporter. "I've pretty much kept all this inside, I was terrified."

The psychological stress from years of abuse finally took its toll January 2015 when Brome took a medical leave of absence from the force, he said. He then filed his suit in September 2016, but the case was dismissed last March on the grounds that it was filed beyond the one-year statute of limitations.

Brome's lawyer, Gay Grunfeld, managing partner of Rosen, Bien, Galvan and Grunfeld, who did not initially represent Brome, took up the case and filed an appeal in late November in the state's First District Court of Appeal in San Francisco. The brief argues that the case was thrown out in error, and that Brome was subjected to continued acts of discrimination and that his evidence could not be presented. The CHP has until March 1 to file its reasoning brief.

Brome's career with the largest state law enforcement agency in the country started at the CHP academy in West Sacramento, as did the discrimination against him.

"I would hear things derogatory about women, minorities, and gay people and other incidents when I was called a fag," he said.

One of the most frightening situations happened at the academy when he had not fully come out of the closet. "Another cadet put a gun to my head and said 'I know you're gay, tell me you're gay or I'll pull the trigger."'

That same person is now a sergeant, Brome said.

It was at the academy, too, that an instructor, in front of 30 or 40 cadets, told him to take off his skirt and start acting like a man.

"After that I was like open game for all the cadets," he said. "It started to get even worse at that point."

From there Brome chose to work at the San Francisco office that same year thinking it would be more welcoming of gay officers. He was wrong. Pink roses were wedged in his mailbox, his locker was damaged, he had his name scratched off an achievement plaque, and his car was keyed, according to the brief.

"The homophobia was even worse there," he said. "There was constant talk about the queers, fags, and freaks at Stud bar." The Stud is a gay bar in San Francisco's South of Market neighborhood near the CHP office.

Another incident at the San Francisco office was when Brome was called into the office and a fellow officer, in front of many other officers, told him to be careful because the female officer in the office was wearing a strap-on. "That pushed me to complain," Brome said. "As soon as I did that the officers came after me."

His multiple complaints and the CHP's investigation into discrimination went nowhere. This also prompted other officers to stop responding to Brome's calls while on scene including some dangerous situations, Brome's lawyer, Grunfeld, said.

"When an officer is not backed up everyone is in danger," Grunfeld said. "To not back up a fellow officer because they complained or because they are gay is the antithesis of California and public safety."

Brome finally transferred to CHP's Contra Costa office five years later where he spent about eight years, then he transferred to the Solano County office in 2008 where he stayed until his medical leave in 2015.

Additionally, in the Solano and Contra Costa offices, officers continued not to respond to Brome's requests for backup at fatal car crashes, traffic stops, and incidents where suspects were armed.

The CHP said it does not comment on pending litigation, but spokeswoman Fran Clader did provide a statement about the agency's policy on providing equal employment to all people.

"It is the policy of the CHP to provide equal employment opportunities for all persons without regard to race, color, religion, national origin, ancestry, age, sex (includes sexual harassment and gender identity), physical or mental disability, political affiliation/opinion, marital status, sexual orientation, or medical condition," the statement read. "Equal opportunity in employment practices will be made on the basis of merit, efficiency, and fitness consistent with state civil service and merit system principles."

Important case
Grunfeld said the case is important on many levels. She said the way CHP, with almost 11,000 employees, treats gay and lesbian officers is "precedential." She explained that it was significant that Brome faced discrimination in all three of the offices he served, indicating an agency-wide homophobic culture. As well, his complaints were not taken seriously or adequately investigated. It also offers an insight into how officers treat LGBT citizens, Grunfeld said.

Brome was approved for industrial disability retirement, which took effect in late February 2016. In September 2016, less than seven months after he retired, Brome filed a complaint with the Department of Fair Employment and Housing against the CHP.

The brief is asking that a jury hear Brome's evidence. "Jay Brome should be permitted to present to a jury his case of severe and pervasive discrimination, harassment and retaliation faced during his twenty-year, award-winning career employed by Defendant-Respondent California Highway Patrol, simply because he is gay," the brief states.

According to Grunfeld, four former CHP officers have produced declarations in support of Brome and his legal efforts.

Brome's case is not an isolated one. Kenneth Stanley filed a lawsuit against the CHP after being with the agency for 30-plus years. Though Stanley is not gay, he was targeted for homophobic behavior because some of his fellow officers perceived him as gay.

He lost the case, but filed an appeal with the Third District Court of Appeal in January, citing that "the trial court erred in excluding evidence, and in awarding summary adjudication as to his claims for defamation, harassment, negligence...," states the claim.

The brief describes many incidents of harassment, including when his co-workers superimposed his face onto a nude photo of pregnant actress Demi Moore that was featured on the cover of Vanity Fair in 1991. His photo was also placed on a greeting card featuring gay singer George Michael. Both were posted in a public area of the office.

"It's your typical macho environment (where) to other less-educated individuals in the workforce there can be no greater insult according to them than portraying somebody as gay," Stanley told the Mercury News. "One would think that we would be well beyond that, but the culture just permeates."

Now being off the force for a few years, Brome said he has "started to heal," but that the memories still haunt him. Today, he owns a vintage clothing store in Benicia and lives in Vallejo with his husband.