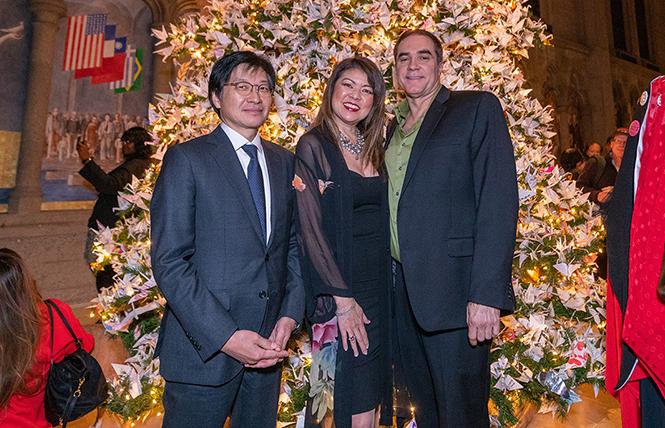 "Our human compassion binds us the one to the other — not in pity or patronizingly, but as human beings who have learnt how to turn our common suffering into hope for the future."
— Nelson Mandela

A remarkable artwork reflecting Nelson Mandela's expression of hope is on public display at San Francisco's Grace Cathedral this month. The World Tree of Hope is a 23 foot tall holiday tree adorned with 17,000 origami cranes carrying wishes from compassionate people worldwide expressing their hopes for a better world. Each year hundreds of volunteers come together under the leadership of Rainbow World Fund to renew and re-create the tree as a gift to the city and the world.

Believing that hope is an essential quality of the human spirit, Rainbow World Fund, a nonprofit emergency relief and international aid group based in the LGBTQ community, brought the idea of this new, inclusive, and inspiring holiday symbol to then-mayor Gavin Newsom in 2006. With Newsom's support, a new San Francisco tradition reflecting the city's compassion, vision, and beauty was born.

Rainbow World Fund's first challenge was to create the origami peace cranes for the wishes that would give the World Tree of Hope meaning. Reflecting on the origins of the origami crane as a symbol of peace originating with the story of Sadako Sasaki, a young Japanese girl who died from leukemia resulting from the atomic bombing of Hiroshima, Rainbow World Fund reached out to noted origami artists, Linda and Vicky Mihara of Paper Tree stationery in San Francisco's Japantown. The Miharas contributed their expertise and engaged the Japanese-American community in the creation of the World Tree of Hope.

The World Tree of Hope's message and purpose resonated with thousands of individuals from all over the world. Their ages, religious traditions, ethnicities, nationalities, residency, educational levels, occupations, and backgrounds are stunningly inclusive. Their messages of hope, including those of former President Barack Obama; Dame Jane Goodall; Isabel Allende; and the Reverend Dr. Martin Luther King's adviser, Clarence Jones, Ph.D., were gathered and placed on the peace cranes. Each succeeding year brought more wishes and more volunteers to decorate the tree. Today it is the world's largest origami decorated holiday tree; a moving testament to humankind's ability to think and act cooperatively and compassionately.

The World Tree of Hope's home for 11 of its 13 years was City Hall, referred to by some as "the people's palace," a center of government; a place reflecting the aspirations of democracy, freedom, and justice. Standing at the top of the grand staircase in the Rotunda of City Hall, the World Tree of Hope was more than a holiday decoration, it was a reminder of the work needed throughout the world to bring peace, safety, and dignity to all beings.

This year the World Tree of Hope has returned to Grace Cathedral, where it was welcomed in 2014. Often referred to as "the people's church," Grace Cathedral is a magnificent setting for the World Tree of Hope that embraces all people regardless of spiritual belief or practice, of all backgrounds, conditions, races and nationalities, genders, sexual orientations, legal or social status; a space that allows for spiritual, personal, and social growth and elevation.

We've returned to Grace Cathedral with gratitude and hope that those who are moved by or are curious about the World Tree of Hope will follow it there. In addition to the World Tree of Hope, Grace is hosting Les Colombes, a special installation by Michael Pendry of 2,000 origami peace doves ecstatically soaring over the Cathedral's nave. There is great beauty in its architecture, artworks, and music. But most beautiful is the spirit of welcome and nurturing of the human spirit you will find in its community.

Rainbow World Fund is grateful to all who have helped to create the World Tree of Hope. We invite you to participate by going to http://www.worldtreeofhope.org. For more information about Rainbow World Fund's humanitarian aid and relief work visit http://www.rainbowfund.org. Grace Cathedral is located at 1100 California Street. The World Tree of Hope is located inside the cathedral's Taylor Street entrance next to the United Nations mural. For more information about Grace Cathedral, visit https://www.gracecathedral.org.

Karen Kai is a board member for Rainbow World Fund.