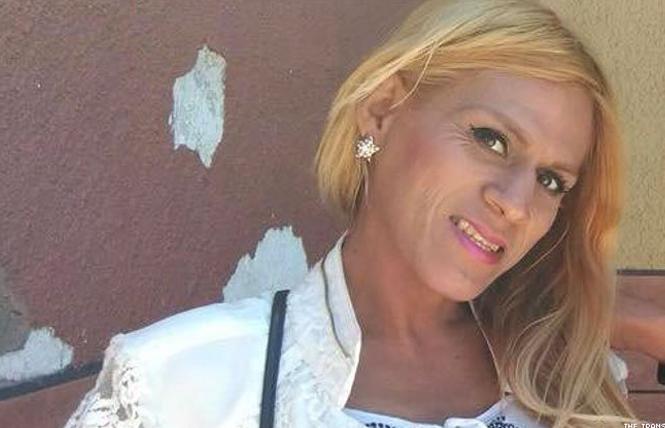 Roxsana Hernandez died in May while in an immigration detention facility. Photo: Courtesy TLC

In its latest step toward seeking justice for Roxsana Hernandez, a transgender woman who died in Immigration and Customs Enforcement custody in May, the Transgender Law Center has filed a wrongful death tort claim against the state of New Mexico where Hernandez was held in detention.

The claim is the first step in TLC's eventual plan to sue ICE if the agency does not comply with its legal obligation to release information surrounding Hernandez's death.

"ICE is obligated to release information including the review and autopsy of Roxsana's death," Lynly Egyes, TLC's director of litigation and counsel on the case, said in an interview with the Bay Area Reporter. "We are waiting for the government to do their job." Egyes added that ICE has surpassed its 30 days after death requirement to release the information.

Hernandez, 33, traveled to the United States from Honduras in a migrant caravan through Mexico and arrived May 9 at the San Ysidro Port of Entry near San Diego seeking asylum, according to media reports. After being in ICE custody for about two weeks, she died from cardiac arrest May 25. Many immigrant advocacy groups claim Hernandez died because she was denied medical treatment. Hernandez was HIV-positive.

"Roxsana came to the United States looking for safety and security," Egyes said. "She was asking for help and protection, instead she was met with torture and being denied medical treatment and ultimately death. This is not acceptable."

The tort claim also reveals, for the first time, the results of an independent autopsy report, paid for by TLC, which found that "Ms. Hernandez endured physical assault and abuse while in custody. Specifically, forensic evidence indicates she was handcuffed so tightly as to cause deep tissue bruising and struck repeatedly on the back and rib cage by an asp or similar instrument while her hands were restrained behind her back."

"Congress requires ICE to publish an initial report, for public release, on each in-custody death for within 30 days and similarly for a final report within 60 days. It has been over 180 days since Ms. Hernández was pronounced dead and no such report has been publicly released," said the senators in a news release. "ICE's failure to release this report diminishes the systemic, traumatic, and in this case fatal, violence that transgender individuals experience daily as a result of their gender identity."

The news release also included details of reports that found Hernandez, "endured freezing temperatures and was denied adequate food, water, and medical care. During her transport between facilities by ICE, she vomited to the extent other detainees begged authorities to provide her with water and proper medical care," said the senators.

California's largest LGBT advocacy group, Equality California, circulated a news release last week condemning the brutal beatings of Hernandez while in custody and is asking people to sign a petition that demands ICE release information regarding her death. The petition can be found at http://action.eqca.org/justice-for-roxana.

Some of the possible claims that the legal organizations will file against public entities include battery, negligence, assault, failure to protect, excessive force, intentional infliction of emotional distress, deliberate indifference, wrongful death, and failure to provide proper medical/mental health care.

Egyes told the B.A.R. that data show that LGBTs face higher rates of physical and sexual violence than any other group in immigration detention.

The reports of Hernandez's violent treatment in custody comes as President Donald Trump and his administration have made it harder for immigrants to seek asylum. Last week, Trump announced a proposal that seeks to require immigrants coming through Mexico to remain in Mexico until their asylum is granted. This is in direct conflict with the long-standing law that immigrants have the right to seek asylum in the U.S. and remain there until their case is approved.

"We will fight for this," Egyes said. "We want answers to what happened."

Updated: 12/5/18: After the print edition of this story went to press, the online version was updated to include comments from Senator Kamala Harris.