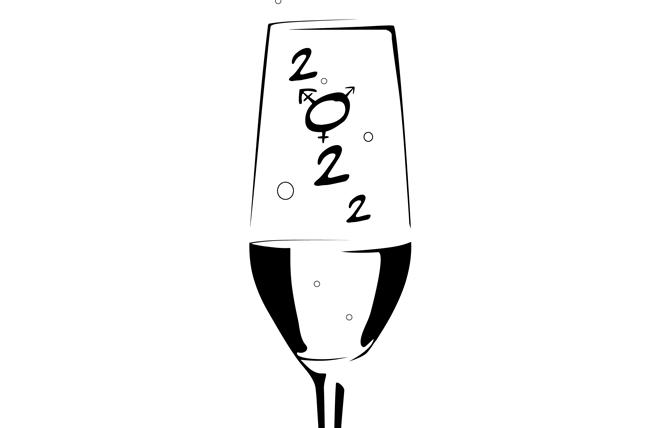 The holidays can be a hard time to be a trans person. More often than not, we don't have a lot of family to go home to for the holidays, and end up spending many days far removed from the trappings of the season. That sort of disenfranchisement doesn't end when the wrapping paper gets trotted to the trash bins, either.

For many, New Year's Day is a reminder of the losses of the previous year: the people who have left our lives in one way or another, the losses in the public arena or via legal battles, and just the general battles we face, big and small, simply for being ourselves.

It has been one challenge after another. Even after the rejection of then-President Donald Trump at the ballot box last year, his influence on the courts, on the Republican Party, and on society in general cannot be overstated. His use of transgender people to push his agenda has only grown in the wake of his presidency, as the right looks to us as one of many possible targets of the fear and ire.

All this that we're facing can be even further magnified in the last two years, as we try to navigate our trans lives in the midst of a global pandemic, attempting to avoid COVID-19 while trying to live an authentic life. It can lead us to become hardened and cynical about the turn of yet another leaf on the calendar.

It is very easy to look at 2022 as just another 2021, which was just another 2020, and so on. It is deceptively alluring to retreat, feeling hopeless as the calendar changes, resigned to it just being more of the same, another year full of hardship and difficulty.

If this is you, I am going to ask you to reconsider.

Now, I don't wear rose-colored glasses. Times suck right now, and I've not been spared a lot of heartbreak in 2021. Yet, keep in mind that the one thing we have control over is how we manage this.

If we retreat into pain, or if we encircle ourselves with cynicism, then we will surely see 2022 become a repeat of the last couple of years. We will remain disenfranchised and hurt. Our prophecy will be self-fulfilling. If we bring that energy, it will be returned in spades.

I don't say this as some sort of "woo-woo" sympathetic magic sort of thing. Right now, we face some of our gravest threats to transgender rights in this country and the world. What we saw in 2021 may well be a prelude to far worse attempts to curtail our rights.

We can let that happen with a shrug. We can assuredly let those who stand against us win. It would cost us nothing to lose everything. I'd even argue that those who are pushing against trans rights are counting on that.

So, I ask this: do we just welcome the negativity over our threshold, assuming it is our lot — or do we push back? Do we use the very strength of our will to seek to make things better?

I will always stand in the latter camp.

I don't wish to look at 2022 as just "more of the same," and while I know the turning of a page in the calendar doesn't physically mean anything, it is still a moment when we can draw a metaphorical line and tell everyone that we will make the year ours.

I also want to remind you of something important.

Yes, we saw scores of anti-transgender bills introduced in state legislatures in 2021. At the same time, the majority of those were defeated.

They were defeated by people who weren't willing to accept that potential loss.

The current Biden-Harris administration has been working hard to turn back anti-trans measures from the Trump years, such as the right to serve in the military, while also expanding other rights, such as a gender-neutral "X" on U.S. passports for those who wish it.

These were victories at the hands of people who pressed the president and others in the administration to take action.

The Gavin Grimm case was settled in 2021 when the U.S. Supreme Court refused to hear an appeal from the Virginia school district that fought for years to prohibit him from using the boys' restroom. This helps further cement federal Title IX protections for trans students in the wake of the high court's 2020 ruling in Bostock v. Clayton that a federal law barring employment discrimination on the basis of "sex" also prohibits discrimination based on sexual orientation and transgender status under Title VII.

Grimm's victory only happened thanks to his perseverance and the assistance he received from the American Civil Liberties Union in the yearslong battle. They didn't give up.

No rights victory is handed to you, and that is doubly true in these times. Each of the above happened because we pressed for it.

The right-wing, as well as other anti-trans bigots, are going to fight to turn the clock back on our rights at every turn, but it is up to us — all of us — to do what we can to stand up to them. Our inaction would only aid them.

This is why how we face this year matters. I don't want to see us roll over and let this world have its way with us. I want us to look at 2022 as being our year until we hear otherwise. I want us to be ready to make this year just what we want it to be, shaped in our own image, and filled with our strength.

Now is the time.

Gwen Smith will burn your house down, with the lemons. You'll find her at www.gwensmith.com