by Honey Mahogany and Race Bannon 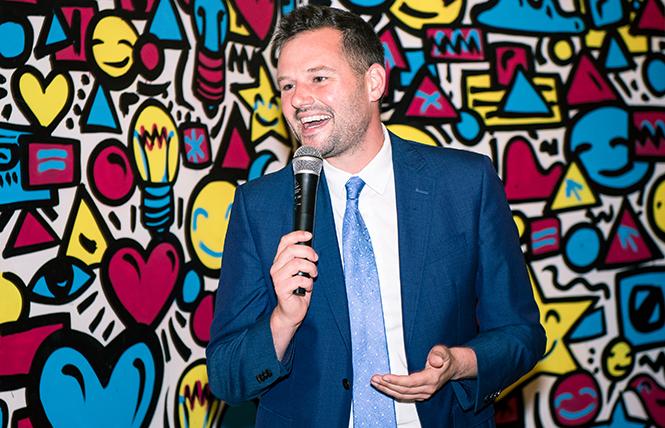 If you follow San Francisco politics, you know Matt Haney. An effective, progressive leader, Haney has been an advocate and public servant for nearly two decades having worked as a pro bono tenant attorney, state legislative aide, president of the San Francisco Board of Education, and most recently as District 6 supervisor and chair of the board's Budget and Finance Committee.

Haney has made a significant impact on our most important problems and has repeatedly proved he knows how to lead and deliver. He listens to those most vulnerable to and impacted by systemic inequities. He possesses a relentless work ethic and an impressive ability to connect and communicate with the public. Since his first day in office as supervisor, Haney has fought against corruption and worked to implement bold, innovative policies to tackle some of San Francisco's toughest issues.

Haney has tackled homelessness and housing instability on multiple fronts: he fought to open more Navigation Centers; he helped push through 1,000 units of low-income housing for city workers and educators and more than 700 units for the formerly homeless; he made sure residents in permanent supportive housing didn't have to pay more than 30% of their income toward rent; and he wrote the emergency ordinance opening 8,000 beds in shelter-in-place hotels.

As the supervisor of the Tenderloin and South of Market districts, Haney represents neighborhoods that are ground zero for the overdose epidemic. Haney demanded an end to containment zone policies, urged the city to recognize the crisis that exists on our streets, called for a state of emergency around overdose deaths, and worked alongside LGBTQ leaders Laura Thomas of the San Francisco AIDS Foundation and Gary McCoy of HealthRIGHT 360 to advocate for the opening of an overdose prevention site. (McCoy is also a co-chair of the Alice B. Toklas LGBTQ Democratic Club.)

As supervisor, Haney took on one of the city's largest departments, Public Works, to hold it accountable. He authored a 10-point plan helping to establish San Francisco's first 24-hour bathroom program, replacing our city's ineffective trash cans, increasing street cleaning, and improving 311. Haney worked alongside experts in the field, residents, business owners, and Public Works employees to create a long-term solution for our city's infamously filthy streets. He created a new Department of Sanitation and Streets dedicated to street cleaning and repairs that goes live in late 2022, and established a commission to oversee Public Works.

San Francisco's ever-growing income inequality contributes significantly to many of the city's most pressing issues. Taking steps to address this, Haney introduced a resolution to have San Francisco formally join the national guaranteed income movement. This led to a guaranteed income task force and established a pilot program where up to 1,000 at-risk transgender residents would receive at least $500 in unrestricted, monthly cash payments. Additionally, Haney worked alongside labor to author and pass the Overpaid Executive Tax, a progressive tax on companies whose CEOs earn 100 times more than their median worker.

Haney is passionate about protecting San Francisco's arts and culture. Haney authored an emergency ordinance to stop the destruction of important SOMA nightlife institutions. During the COVID-19 pandemic, Haney created a Music and Entertainment Venue Recovery Fund to help prevent these vital establishments from closing.

When it comes to fighting for the LGBTQ+ community, Haney has been one of our greatest champions. He fought to allocate money to help fund the building of Eagle Plaza, the world's first LGBTQ leather plaza, and helped ensure the SF Eagle became a legacy business and landmark, making it the first LGBTQ landmark in SOMA and only the second leather LGBTQ landmark in the country.

Haney has been a huge supporter of LGBTQ cultural districts including the Transgender District and the Leather and LGBTQ Cultural District. He ensured that the districts were fully funded when funding was under threat during the pandemic. He supported placemaking such as murals, banners, painting poles, leather crosswalks, art installations, and events and programming. Haney worked with the Bears of San Francisco and the Sisters of Perpetual Indulgence to revive the Harrison Street Fair under its new name Bearrison Street Fair.

As budget chair, Haney fought for a budget that puts LGBTQ+ residents first. He ensured that the budget included housing subsidies for trans and HIV-positive people, and $12 million to acquire a home for the country's first standalone LGBTQ+ museum.

In three very intense years, amidst a pandemic, an overdose epidemic, growing wealth inequality, and a housing crisis, Haney has demonstrated that he's a fighter for the people. He's a progressive politician who won't put politics before his constituents. Haney is a leader with a proven track record, unafraid of bold ideas, and willing to do the work. San Francisco deserves bold, progressive representation in Sacramento, and this February we have the chance to get it with Matt Haney.

Honey Mahogany, a queer transgender person, is chair of the San Francisco Democratic Party and a legislative aide to Supervisor Matt Haney. Race Bannon, a gay man, is a community organizer and is a former leather columnist for the Bay Area Reporter. The opinions expressed are their own.