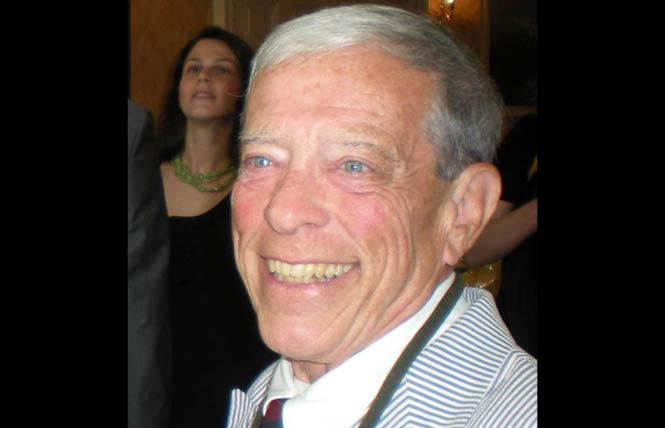 Richard Paul Magary, who was the longtime administrator for the Castro Merchants Association, died December 20 at Kaiser Hospital in San Francisco, his sister wrote in an email. He was 81. The cause of death was a lengthy illness, his family said.

Mr. Magary, a gay man, was a major community organizer and volunteer in San Francisco, with 15 years of service with the Castro merchants group. He retired in 2020. He was president of the Buena Vista Neighborhood Association for 25 years, from 1988-2013. During this time the park was cleaned up and made safer, new plants and new park benches were installed, his sister wrote.

"Losing Richard is pretty devastating for a lot of us," Wiener wrote in text. "He was the ultimate community servant, truly devoting his life to the neighborhood and always doing it with professionalism and integrity. It's a huge loss."

In an email to members, the Castro merchants group memorialized Mr. Magary.

"Richard joined Castro merchants right before the turn of the century and stayed involved right up until the end, even after he stepped down from his post in May of 2020," board President Masood Samereie stated.

"Richard was a master of organization and project management, leading such important programs as our annual membership drive, the printed Castro Guide, fundraising, holiday celebrations, Gilbert Baker's rainbow flag, and so much more," Samereie stated. "There is nothing that Richard wouldn't volunteer to do and his vast love and knowledge of the Castro was immeasurably valuable and appreciated. He was also a vocal member of the community, standing and shouting side by side with neighborhood heroes to protect our little hamlet and move it forward."

Herb Cohn, who was the merchant group's longtime treasurer and had served as president of the Castro/Upper Market Community Benefit District board, was Mr. Magary's close friend for over 40 years.

"It's kind of hard to sum up my 45 years of friendship with Richard," Cohn, a gay man who now lives in Palm Springs, wrote in a Facebook message to the B.A.R. "He was both incredible and challenging, all at once. When he retired from his corporate job, I recruited him to help me out with my neighborhood merchant association. The rest is history with him eventually doing the same for the Castro CBD, Plan C, etc. He was always there to do whatever was needed, and usually roped others into doing it as well. His commitment to the Castro community these last years was unmatched. And he did it all with a smile and usually a crusty comment. I will miss him every day of the rest of my life."

"Richard was generous in spirit, giving his time and talent to BVNA and MUMC," Dufty wrote in a text, referring to the Buena Vista Neighborhood Association and the Merchants of Upper Market and Castro, the former name of the merchants association. "He was so smart, well organized, and gracious that he made sure our neighborhoods and merchants were heard and supported.

Patrick Batt, a gay Castro business owner and a former president of the merchants group, recalled that Mr. Magary helped him as manager of the Castro Community Meeting Room, a project Batt and the late Lion Barnett spearheaded in 2000 to allow groups to use a room above the Sunglass Hut in the Bank of America building.

"We paid him to do the scheduling, orientation, and group follow through for this community resource utilized by some 30-plus nonprofit groups," Batt wrote in an email. "While the room has been on hiatus during the pandemic we were in the process of trying to get it up and running again at some point in the future."

Batt added that he is now running the room himself.

For the park group, Mr. Magary organized fundraisers, like doughnut sales to raise money for various projects, and would be out there weeding with other volunteers on weekends, his sister, Phyllis Kessel, wrote to the B.A.R.

Right after graduating from the University of San Francisco, he went to work for Bank of America, specializing in loans to minority small businesses. Dr. Ernie Bates' American Shared Hospital Services was one, and Mr. Magary became one of three white members of the board as a financial official, his sister noted.

Bates said that Mr. Magary was part of ASHS' early team, along with Barbara Nazhid and Jim Brock.

"He served as my controller and in operational roles and was a valued member of our team and was a significant team member in ASHS being one of the first Black-owned businesses going public," Bates wrote in a text message.

"He was loyal, smart, kind, and funny," Bates added.

Mr. Magary was honored for his service by Wiener, the City of San Francisco, and others during his lifetime, his sister stated.

Besides his sister, survivors include nieces Cleo Van Doren and Colette Wirtschafter and their families; and nephew, Christian Wand.

Updated, 12/21/21: This article has been updated with additional comments.