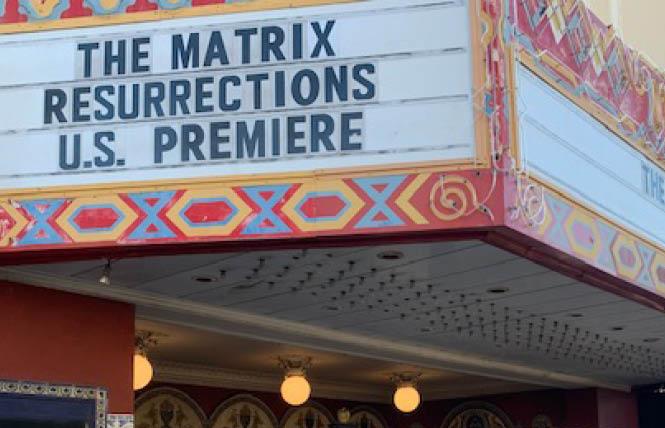 The U.S. premiere of "The Matrix: Resurrections" December 18 at the Castro Theatre has upset some merchants as street closures have limited parking this weekend. Photo: Sari Staver

A number of Castro neighborhood merchants are upset that they weren't informed that the red carpet U.S. premiere of "The Matrix: Resurrections" at the Castro Theatre would be taking away parking spaces for much of the last weekend before Christmas.

The film premiere Saturday, December 18, will bring trans director Lana Wachowski, star Keanu Reeves, and other cast members to the LGBTQ neighborhood. Gay District 8 Supervisor Rafael Mandelman posted late December 16 that Castro Street is closed from 6 a.m. December 17 through 11:59 p.m. December 18. The parking lot behind the theater will be closed through midnight December 19. Even parking on Collingwood — between 18th and 19th streets, on both sides — will be taken away, from 4 to 11 p.m. December 18.

Further, Muni's 24 bus line will be rerouted in both directions. Historically, San Francisco Municipal Transportation Agency projects and most other construction in the city's neighborhood commercial corridors are wrapped up ahead of the holidays so that parking is not impacted.

Patrick Batt, a gay man who owns Auto Erotica on 18th Street, said he only found out about "The Matrix" premiere from the Bay Area Reporter. He said he'd "been seeing all these trucks show up with equipment" since Wednesday.

"It's going to absolutely kill business. There'll be no place to park. We have two parking lots — we lost one beforehand behind Walgreens to the LGBTQLMNOP Cultural District vaccine clinic, ironically their last one for two weeks," Batt said, referring to the Castro LGBTQ Cultural District.

Batt said that this weekend is critical for business, and is upset that there wasn't warning.

"I think they should have done a better job reaching out to the neighborhood," Batt said. "They did no outreach."

Batt said that while "it's great to see Keanu, it's not good to see a loss of business after such a tough year."

The San Francisco Chronicle reported on the premiere plans two weeks ago and the article indicated that there would be street closures. It also stated that Wachowski is said to be a fan of the movie palace, which first opened in 1922 but has been dark for much of the past two years due to the COVID-19 pandemic.

Tickets for the premiere are not available to the general public, though the Chronicle article stated there would be a "fan zone" near the red carpet.

Terry Asten Bennett, a straight ally who manages Cliff's Variety on Castro Street, predicted a decline in business of up to 35% from two years ago.

"I'm frustrated," she said. "There's so much that could have been done to mitigate the harm. This is supposed to be our busiest weekend of the year, and when you take away parking, it has a 25-35% impact on us."

Bennett said a member of the production crew with Warner Bros. Pictures came by the store and told her mother that they were told expressly not to reach out to neighborhood businesses. Warner Bros. pictures did not respond to a request for comment as of press time.

Batt alleged that Masood Samereie, a straight ally who is head of the Castro Merchants Association board, was "blindsided." Samereie did not respond to a request for comment as of press time through a representative.

Bennett said that Warner Bros. Pictures or the city should have reached out.

"The city talks about how it supports small businesses but it's actions aren't matching its words," Bennett said.

"I have heard from many Castro merchants and neighbors who received no outreach about the significant impacts to the neighborhood on one of the busiest shopping weekends of the year for our small businesses," Mandelman stated. "I share their concerns about the total lack of communication until this week and have been working with city staff and the event producers to ensure better updates are provided."

Susannah Greason Robbins, the executive director of the San Francisco Film Commission, called the concerns "understandable" in a statement.

"Our understanding is the local event producer has been and continues to engage with the merchants and going door to door in an effort to be responsive to their concerns including developing signage that the businesses in the Castro are open for business and facilitating delivery and pick up," Robbins stated. "The set up and production crew continue to patronize and buy direct from the local small businesses. We realize this production is causing inconvenience and hope the additional foot traffic as a result of this event will make up for this impact."

Nonetheless, Robbins is excited for the film's debut.

"This premier is putting San Francisco and the Castro on the world stage and will bring with it people that will visit the Castro and patronize the local merchants," Robbins stated. "The film has employed hundreds of Bay Area artists, extras, and created internships to help expose young adults in film and production — opportunities that are hard to come by. It has also invested millions during the film production at our hotels and with local vendors through catering, equipment rentals, for wardrobe and many others."

The mayor's office, and the Castro Theatre did not respond to requests for comment as of press time.

Updated, 12/17/21: This article has been updated with a statement from the SF Film Commission.

Lesbians Who Tech & Allies gears up for October SF conference
Sign up!