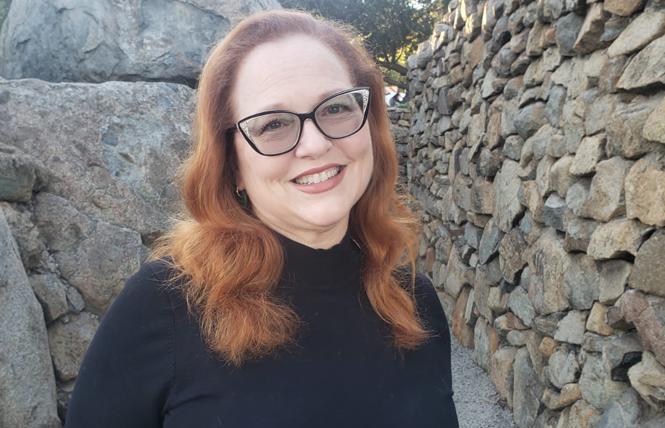 Kelly Riordan is the founder of WeWillDecide.com, which aims to educate voters about their congressional representatives. Photo: Courtesy Kelly Riordan

Ahead of the 2022 midterm elections, a San Diego-based website is aiming to educate voters about their congressional representatives. But with a nominal monthly fee required, it remains to be seen if it will catch on with the country's electorate.

Kelly Riordan, the founder of WeWillDecide.com, acknowledged the hurdle her site faces in a recent interview with the Bay Area Reporter. At just $3 a month, the membership price is cheaper than what most people pay for a streaming service like Disney+ or Apple TV+.

"It is a sticking point," Riordan said. "The bottom line is to make the site work, I need to employ more than just me."

She teamed up with several friends who are "genius web designers" to build out the site, which launched in January, and create the programs needed to keep it updated. Riordan also hired a PR firm to help spread the word about the website, with various media outlets covering it this year.

Asked how many people had signed up to date, Riordan said she is not releasing that information at the moment.

"It would be embarrassing at this point," she told the B.A.R.

As more people start paying attention to next year's elections for all of the 435 voting House seats and 34 of the 100 seats in the Senate that will be contested, Riordan is hopeful of seeing the number of paid users of her website increase.

"The big hurdles to my website is the $3 and it being so completely new and original and unprecedented," she said. "The other side of the sword too is it so new, so different, it will take a little while for people to understand how this tool actually works."

Rather than accept advertising on the site, which Riordan said could be annoying for people and could raise questions about the independence of the site, she opted to ask for financial support from users.

"Users are paying for the blessed beauty of no advertising," she said. "They are paying for a level of integrity because I feel like the public needs that so desperately."

Plus, Riordan said it would be impossible for her to ensure that advertisers didn't have a political bias were she to accept ads on the site.

"There is no way for me to vet every single advertiser and go this advertiser doesn't give any money to any political parties," she said. "I can't accept money from those people and say this is apolitical; that doesn't work. That negates the whole idea of this being an apolitical political website."

Anyone is able to check their voter registration for free via the website. The platform allows its paying users to act as if they are serving in Congress and cast their own votes for any proposed bills and executive orders before the House or Senate.

The website creates personalized scores and statistics based on the user's votes and compares them with every Congress member. In addition, the user can instantly match their opinions with other WeWillDecide members in their state and nationwide.

To entice people to sign up for the website, Riordan is offering a free week's worth of access to it. Once someone registers for the site with their ZIP code, they are taken to a personalized page that lists both their state's U.S. senators and their congressmember.

Click on the elected leaders' names and a page comes up with their voting history for everything they have cast a vote for during the current session of Congress as well as what bills they have proposed. Also listed are how often they have voted with their party and how many votes they have missed.

In the case of Senator Dianne Feinstein, California's senior Democratic representative in the upper chamber of Congress, the WeWillDecide website says she has voted 99.32% of the time with her party and has missed just 58 votes.

It includes links to the government's website where users can read each federal bill directly. And users can select any member of the Senate or House on WeWillDecide that they want to keep being informed about.

"Basically, it is like fantasy football. You are creating scores for the politicians you want to follow," explained Riordan. "Once you are using the platform — you can use it a few minutes here and there — there are a lot of bills that you can read and indicate I agree with it or don't agree with it."

The site was designed to be extremely user-friendly and easy to use, said Riordan. One thing she has noticed from using the site is there are many "stupid things" that shouldn't need to be voted on, like national days recognizing bison or cast fishing. At the same time, said Riordan, she has noticed a lot more bipartisan votes than she expected to see.

"Using the site reduces anxiety. I didn't see that coming," Riordan told the B.A.R. "As I use it more now, it takes away the hysteria and anxiety because I know what is going on."

Riordan, 53, who said she is "straight-ish," works fulltime as a cardiac sonographer. A fifth generation native San Diegan, she is keeping her own political party registration private. An infrequent voter, she said she often struggled to find the sort of information she wanted to know about politicians to know if they deserved her vote.

"I want to know how much they vote with their party. Are they an independent thinker or an automaton?" asked Riordan.

She spent several years thinking about what information she wanted to include on the site to help educate voters about their congressional representatives. Finding it confusing herself to keep track of her own congressmembers, Riordan wanted to build a site that congregated useful information about the country's elected leaders that voters could have at the ready of their fingertips.

"This is such a separately needed tool because it just seems that so much of our society now is built on keeping people confused, in the dark, and hysterical," said Riordan. "No one makes good decisions when they are hysterical."

She hopes WeWillDecide gains in popularity like fantasy sports websites.

"I want to take the political hot mess and turn it into a sports thing. If you have been on an elevator and talking with great passion about a fantasy football team, you can handle this," said Riordan. "The American people can handle it; they can do it."

The Political Notes column is taking its annual holiday hiatus and will return Monday, January 10.