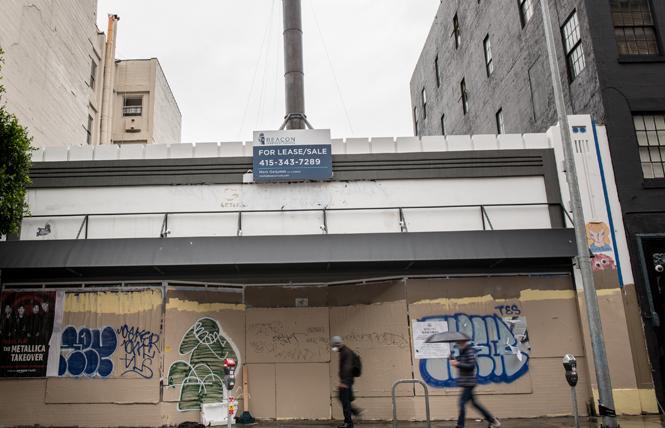 The San Francisco Board of Supervisors approved $6.3 million to purchase the vacant building at 822 Geary Street that is being considered as a safe consumption site. Photo: Christopher Robledo

The San Francisco Board of Supervisors voted 10-1 December 14 to spend $6.3 million to purchase a site in the Tenderloin that may be used as a supervised drug consumption facility.

As the Bay Area Reporter reported, Mayor London Breed's office had said November 16 that it is interested in opening a facility and that it had found just the place for it — a site, at the corner of Geary and Hyde streets, that consists of an 8,875 square foot building and an adjacent 2,186 square foot parcel. Last week, the proposal to buy that property was approved by the supervisors' budget and finance committee.

Supervised consumption sites — also called overdose prevention sites or supervised injection facilities — are places where drug users can consume pre-obtained drugs under the eye of trained staff. Advocates argue it is necessary to implement in San Francisco, where the number of accidental drug overdoses dramatically rose from 259 in 2018 to 712 in 2020 — and is on track for a similar death toll this year.

The property San Francisco plans to purchase is at 822 Geary Street and 629 Hyde Street, according to Andrico Penick, the director of the real estate division of the city's general services agency. It is currently owned by Georgios Markoulakis and Crisula Markoulakis.

At the December 14 meeting — the last of the year — District 6 Supervisor Matt Haney announced he wanted to add an amendment to the purchase.

"This is an important acquisition we are going to make that will help to meet the needs of our community when it comes to behavioral health," Haney said. "The amendment states that the building is not authorized for any specific use ... and that the city ... is not committed to a specific use of the site."

"We all know the acquisition of the property is for a specific purpose," Peskin said.

Peskin added that he has "long been a proponent" of supervised consumption sites, but expressed dismay that the building is being purchased without much public outreach — something Haney had been critical of during the budget and finance committee meeting last week.

"Many of the Tenderloin's residents and small businesses are just becoming aware this project is being crammed through," Peskin said.

Peskin blasted Breed, saying his constituents "feel abandoned by the city," which he characterized as being "more interested in press releases" than in solving problems.

Peskin's concerns were not heeded, and the amendment and purchase passed 10-1.

Following the board's vote Selby stated to the B.A.R., "I support safe consumption sites. We need to do everything we can, including prosecuting drug dealers, to make a safer San Francisco. We all deserve to be safe."

Campos and Mahmood did not respond to an immediate request for comment on December 14.

Breed's communications director, Jeff Cretan, stated to the B.A.R. that the process had to be fast so that the city didn't miss out on the opportunity to purchase the building.

"This is an important opportunity to acquire a site for behavioral health uses for people suffering from mental illness and addiction to get off the street and connected to services," Cretan stated. "The board has made clear their desire that we treat the rise of overdoses and suffering as an emergency, and the Mayor agrees it requires urgent action."