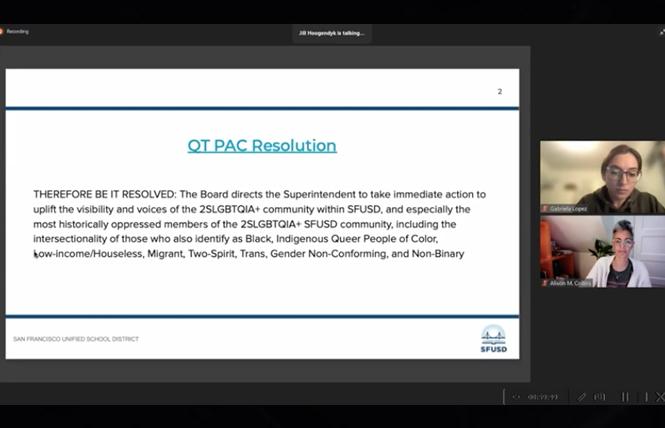 The San Francisco Unified School District is one step closer to having a Queer and Transgender Parent Advisory Council.

On December 13, the school board's augmented curriculum and program committee moved forward the proposal — introduced by embattled Commissioner Alison Collins last month — to the budget committee, which meets January 5. If approved there, it will go before the full school board. There was no vote, with Chair Kevine Boggess expressing that the three members of the committee had a consensus.

Collins is one of three members of the city's board of education who are facing a recall effort, which will be voted on February 15. Earlier this year, old tweets from Collins resurfaced in which she accused Asian Americans of "white supremacist thinking to assimilate and 'get ahead.'" Collins was subsequently removed as vice president of the board and from her seat on various committees. She responded by filing an $87 million suit against the district and other board members, which was tossed by a federal judge. Collins later dropped the lawsuit after the judge's decision.

Board President Gabriela López and Vice President Faauuga Moliga are also up for recall. López is on the curriculum committee; Moliga is not. The committee is rounded out by Commissioner Matt Alexander.

While Our Family Coalition, which introduced the concept, has been stating that the district would be "the first in the nation to solicit guidance from an LGBTQ-centered parent advisory council," the Bay Area Reporter has learned that there are at least two LGBTQ parental advisory councils in other California school districts.

The B.A.R. contacted Our Family Coalition to inform it about these councils and was told December 2 by Rick Oculto, the director of education for the coalition, "We were taking our cue on that from the families that were organizing around it. From what I understand, the distinction is that the other advisory councils focus on the experience of the students while the SFUSD one, while taking that as part of their work, are also taking up issues involving family engagement, inclusion, and involvement. For example, forms at the school that may not be inclusive of family diversity or in how the district approaches LGBTQ+ representation or even how data about LGBTQ+ families and children are collected."

"I'm not familiar with the inner workings of the cited advisory committees, but it doesn't state that in their description," Oculto continued. "If there is no distinction, then we erred in our presentation."

In spite of being informed of the other school districts' LGBTQ councils, Our Family Coalition continued to tout the "first in the nation" moniker in a December 13 email prior to the curriculum committee meeting.

In addition to the general Parent Advisory Council, SFUSD has four advisory groups currently, representing parents of African Americans, those learning English, Hawaiians and Pacific Islanders, and those in special education programs.

The queer and transgender council as proposed would only allow people identifying as queer and trans to be in leadership positions. Heterosexual and cisgender parents would be excluded, even if they have LGBTQ children, but could still be on the council at-large. It would seat 25 people, and "collaborate with other parent advisory committees/councils," according to a PowerPoint presentation made at the meeting.

M Villaluna, a nonbinary, two-spirit parent who's on the general SFUSD Parent Advisory Council, spoke in favor of the proposed council during public comment.

"I have sent dozens and dozens of emails for the past five years," Villaluna said. "Please recommend to the whole board to pass a parental advisory council."

As the B.A.R. reported earlier this year, Villaluna had urged Collins to reject the nomination of a gay white dad, Seth Brenzel, on the general Parent Advisory Council, before they were appointed themselves. Some parents called Villaluna's selection hypocritical and an example of cronyism. Others highly praised their advocacy around LGBTQ and school issues.

But the biggest concern of the commissioners about the proposed queer and trans council wasn't up to them to decide: the financial impact.

One factor behind the recall effort is that the school district is facing a $125 million deficit in Fiscal Year 2022-2023, which it must cut to avoid being taken over by the state of California. It's up to the budget committee to consider the fiscal impact of the proposal, which comes with a new full-time staff support position. The cost of this position will be disclosed at next month's budget committee hearing.

The school board voted to accept the $125 million in budget cuts December 14 in a 6-1 vote, with López in the dissent. It includes a $50 million cut to schools and a $40 million reduction in administrative, support and operation services, the San Francisco Chronicle reported.

Alexander said that "this is an area we definitely need to invest funds in but I'm not convinced a full-time central staff member is the best way to invest these funds. ... I think we need to make more cuts in upper management."

Collins, who was present at the meeting to advocate for her proposal, said that without a full-time staff member, the council would only represent "affluent or well-resourced families."

"That is why we are calling for funding," Collins said.

Boggess expressed to the board's chief of staff that the three committee members achieved a consensus, and the committee moved on to its next item of business.