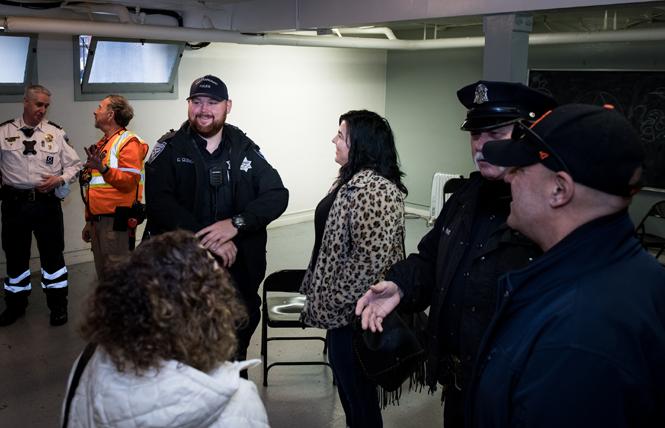 The Castro neighborhood will soon be without a San Francisco Patrol Special Police officer for the first time in over four decades.

Cody Clements, a 29-year-old straight ally, announced that his last day will be December 31, as the Bay Area Reporter previously reported, because he has been hired by another law enforcement agency "up north."

The Patrol Special Police were formed in 1847, prior to the San Francisco Police Department, when it was included in the city charter. Each beat is a privately-owned and -funded business (new officers do have to be hired through the SFPD and the police commission, however). Yet the Patrol Special Police have fallen on hard times in recent years — Clements was the only new officer in the past decade.

Clements patrols the Mission, Castro, and Noe Valley neighborhoods. He told the B.A.R. he bought the beat in 2018 from the widow of John Fitzinger, who died the previous October. Fitzinger succeeded the late Jane Warner, after whom the plaza opposite Harvey Milk Plaza was named.

Patrol Special Police beat owners have to pay out of pocket for medical insurance and retirement savings. Clements said that city bureaucracy prevented his beat from being financially viable.

"I have to do what's best for my future," Clements said.

Specifically, Clements said that he has tried to make hires but has been stifled by the police department.

"If I want to hire new officers, I have to put them under a hiring process the SFPD puts forth," Clements said. "I have to pay out of pocket and over the last three years, I've put forward three background checks and submitted them to the SFPD for review. Historically — when it gets to the police department — they take their time but our background [checks] are not selected. ... If I can't hire employees, I can't expand my business; I can't grow my business."

The SFPD did not respond to a request for comment as of press time.

Clements has three assistant officers, however. He said that he works "five, six, seven days a week, depending on what my other guys do."

"They work other jobs," he said.

"We have limited police powers while on duty. We are peace officers," Clements said, adding that after he makes an arrest, an SFPD unit "comes out and takes statements, and decides if [the arrested person] faces charges."

"We've had great support from businesses, the merchants, Rafael Mandelman, and the SFPD's [LGBTQ+] Pride Alliance," Clements said, referring to the Castro Merchants Association and the gay District 8 supervisor.

The Castro community thanked Clements during a goodbye party the afternoon of December 12 in the rectory of Most Holy Redeemer Roman Catholic Church on 18th and Diamond streets.

Mandelman was one of many people who attended.

"Cody has been a great resource for neighbors and merchants and surely will be missed," he stated.

The merchants and Pride Alliance did not respond to requests for comment.

Clements said he enjoyed the sendoff, adding he was grateful for having received "a lot of support."

Andrea Aiello, a lesbian who is the executive director of the Castro/Upper Market Community Benefit District, stated that "yes, the Castro will miss the Patrol Special Police."

"The businesses in the Castro have hired the Patrol Special Police for over 40 years, relying on them for many issues small and large," Aiello said. "Their absence will create a void in the nighttime Castro and will bring more 911 and non-emergency calls into SFPD, at a time when the police department is struggling with staffing issues."

Aiello stated that "the Castro Community Benefit District has been a significant funder of the Patrol Special Police, paying them to have a public presence patrolling the district, keeping an eye on our public plazas, intervening and de-escalating situations."

Aiello said that the Patrol Special Police officers were "unique" for being "compassionate yet ... firm when necessary."

"They really cared about the neighborhood," Aiello said. "With them leaving, we are seeing the end of an era."