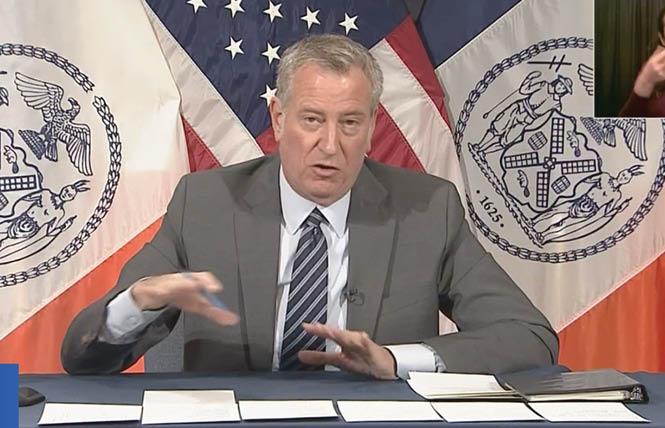 The two facilities, located in East Harlem and Washington Heights, were already operating as needle exchange sites and began allowing on-site consumption November 30, according to an announcement from New York Harm Reduction Educators, one of two nonprofits that merged to form a new organization dubbed OnPoint NYC. During their first days in operation, staff at the two sites reversed several drug overdoses.

The new sites would show other cities that "after decades of failure, a smarter approach is possible," outgoing NYC Mayor Bill de Blasio said in a statement. Mayor-elect Eric Adams has also expressed his support.

Supervised consumption sites — also called overdose prevention sites or supervised injection facilities — allow people to use drugs under the watch of trained staff, reducing the risk of overdose death. Prompt administration of Narcan (naloxone) can quickly reverse an overdose of heroin, fentanyl, or other opioids. The sites provide clean syringes, which prevents transmission of HIV and hepatitis B and C, and offer an entry point for medical care, addiction treatment and other services for people who use drugs. Indoor sites also reduce street drug use and discarded needles.

The news couldn't come at a better time, as the federal Centers for Disease Control and Prevention recently reported that drug overdose deaths exceeded 100,000 between April 2020 and April 2021. San Francisco saw more than 700 overdose deaths in 2020 and is approaching a similar number for 2021.

San Francisco and California officials have been trying to open a supervised consumption site for several years. As the Bay Area Reporter has previously reported, out state Senators Scott Wiener (D-San Francisco) and Susan Talamantes Eggman (D-Stockton) are sponsoring legislation to allow the operation of pilot sites in San Francisco, Oakland, and Los Angeles. The bill, reintroduced repeatedly since former Governor Jerry Brown vetoed a version in 2018, has been plagued by delays.

But local officials are not waiting. In October, the San Francisco Board of Supervisors declared a state of emergency around the city's drug overdose crisis. Last month, Mayor London Breed introduced legislation to the board to authorize the purchase of a site in the Tenderloin that could be used for a supervised injection site.

On December 8, the supervisors budget committee unanimously recommended the board approve the $6.3 million property purchase at Geary and Hyde streets that may be used as a supervised drug consumption facility. The full board is expected to vote on the matter.

"The city is pursuing a policy that could allow the opening of the first safe consumption site," Breed spokesperson Jordan Wilson told the B.A.R. "We are discussing with our nonprofit partners their ability to open and operate safe consumption programs directly for those in need."

Philadelphia appeared to be on track to open the first sanctioned U.S. site in 2020, but neighborhood concerns and federal legal opposition put those plans on hold. Other cities, including Baltimore, Boston, Denver, and Seattle, have also been trying to open such facilities. At least one unsanctioned site has been operating in an undisclosed city for several years.

The federal Department of Justice maintains that supervised injection facilities violate a provision of the Controlled Substances Act that makes it a crime to operate a site where illegal drugs are produced, distributed or consumed. The nonprofit group seeking to open the Philadelphia site sought a Supreme Court ruling on the matter, but in October the high court declined to take the case.

Advocates hope the current administration will look more favorably on supervised injection sites than the Trump administration, but President Joe Biden — who has a history of hardline opposition to drug use — has not indicated where he stands. In California, however, Governor Gavin Newsom appears to be more supportive than Brown.