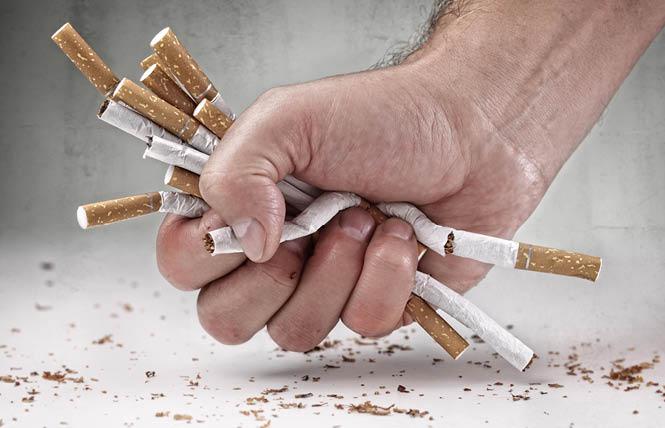 As the 2022 electoral season begins to kick into high gear, a statewide LGBTQ advocacy group has joined the effort to convince candidates and elected officials in California to reject tobacco cash. A number of LGBTQ and straight allied leaders and those seeking elective office next year have already taken the pledge, with more expected to do so ahead of the June primary.

Tobacco will once again be a major political issue in the Golden State next year due to a fall ballot measure fight over the statewide ban on most flavored tobacco products, including menthol cigarettes. Governor Gavin Newsom signed it into law in 2020 and it was to have taken effect in January, but the ban was put on hold due to the ballot measure qualifying for the November 2022 election.

The Equality California Institute launched its OUT Against Big Tobacco coalition in mid-November. It did so in conjunction with the American Cancer Society's Great American Smokeout annually held the third Thursday in November; it is a national day in recognition of tobacco users who are looking to quit tobacco for good.

According to the Bay Area-focused LGBTQ Minus Tobacco project 9.7% of all California adults smoked cigarettes, based on 2018 figures, compared to 18% of LGBTQ adults or nearly twice as much, which is similar to national smoking rates. Each year nearly 30,000 LGBTQ+ people across the country die of tobacco-related causes.

"For decades, Big Tobacco has used their profits to place themselves as friends of our community. This year we are kicking them OUT; out of our Pride, out of our organizations, and out of our politics," stated EQCA program manager Shannon Kozlovich, Ph.D., who formerly was a research scientist at UCSF's Center for Tobacco Control Research and Education. "We are calling all 2022 California State legislative candidates to stand with us and pledge to run tobacco free campaigns."

At its launch last month, 16 state legislators and legislative candidates had taken the pledge. Among them were EQCA's former executive director Rick Chavez Zbur, a gay man who is running for state Assembly in Los Angeles's currently numbered Assembly District 50, and bisexual Palm Springs City Councilmember Christy Holstege, a candidate for the Assembly District 42 seat. (Due to the redistricting process now underway, the state's legislative districts are being redrawn and could end up with different numbers than they currently have when the maps are finalized in January.)

Both of the out candidates running for the state's Senate District 18 seat in Los Angeles County have taken the pledge. They are lesbian social worker Caroline Menjivar and Daniel Hertzberg, who is running to succeed his father, Senator Bob Hertzberg (D-Van Nuys).

The younger Hertzberg and his campaign had not responded to the Bay Area Reporter's interview requests or queries to confirm he identifies as gay under the LGBTQ acronym as of this story's deadline the afternoon of Friday, December 10. (Late Monday, December 13, after this story was published, his campaign did confirm to the B.A.R. that he is a gay man.) Hertzberg says nothing about being gay on his campaign website, though in a tweet last month heralding his being endorsed by the Legislative LGBTQ Caucus he noted he would be "the only LGBTQ+ senator in LA county" if elected.

Last week, bisexual South San Francisco City Councilmember James Coleman told the Bay Area Reporter he would follow the pledge as a candidate next year for San Mateo County's Assembly District 22 seat. It will be an open seat, as Assemblymember Kevin Mullin (D-South San Francisco) is running for an open House seat on the Peninsula next year.

"I will be refusing donations from the tobacco industry, yes," Coleman pledged.

In response to recent queries from the B.A.R., City College of San Francisco trustee Thea Selby, a straight ally whose mother died of lung cancer, and gay former supervisor David Campos, currently on leave as chief of staff to San Francisco District Attorney Chesa Boudin, both said they took the pledge not to accept tobacco cash as they seek to succeed Chiu in the Legislature.

If none of the four candidates receives more than 50% of the vote in February then the top two vote-getters will face off in an April runoff race. The winner will serve out the remainder of Chiu's term through next December and will need to seek a full two-year term next year.

Chiu had also pledged during his past campaigns for office not to accept tobacco money, according to the Snuff Tobacco Money out of California Politics Campaign sponsored by American Cancer Society Cancer Action Network Inc. Among the 2020 campaign season pledge signers were Joy Silver, a lesbian who lost her bid for a Palm Springs area state Senate seat, and gay former Assemblyman John Laird, who won his bid for a Santa Cruz area Senate seat.

Two gay Assembly candidates who fell short in their 2020 bids had also signed onto the pledge. They were Godfrey Santos Plata of Los Angeles and Bijan Mohseni of Los Alamitos.

Also taking the pledge to reject money from tobacco interests in their reelection races last year were gay state Senator Scott Wiener (D-San Francisco) and lesbian Assemblymember Sabrina Cervantes (D-Corona). They have both recommitted their stance via the EQCA Institute's initiative. Cervantes is doing so as she runs for another two-year term in 2022, while Wiener is not up for reelection until 2024.

"The tobacco industry serves no purpose other than to make people sick. Tobacco money is not essential for people to win," stated Wiener.

Since it announced the launch of its OUT Against Big Tobacco Coalition initiative for the 2022 campaign season, EQCA had not posted an updated list of signatories online as of early December. A spokesperson for the organization told the B.A.R. that a link to a separate page with the information was to have been added to the coalition's website by end of the day Friday, December 10.

UPDATED 12/14/2021with a response from Daniel Hertzberg's campaign.