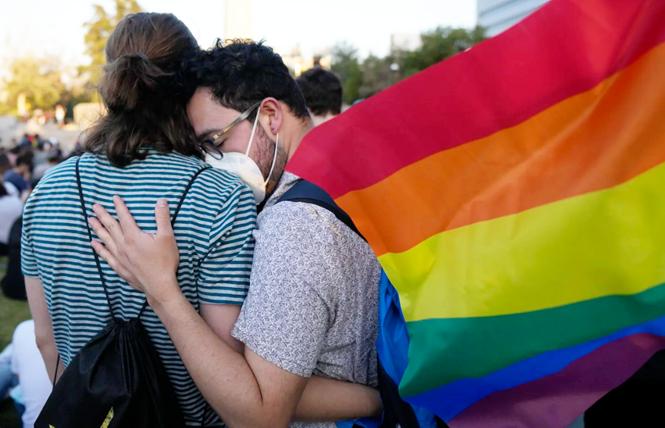 Members of the Movilh - Movement for Homosexual Integration and Liberation - celebrate after lawmakers approved legislation legalizing marriage and adoption by same-sex couples, in Santiago, Chile, on December 7. Photo: Esteban Felix/AP

Wedding bells are expected to ring in Chile after the president signed a bill December 9 legalizing same-sex marriage.

The law will allow same-sex couples the same rights as opposite-sex couples, including adoption, reproductive technology, parental rights over biological or adopted children, inheritance, and other rights. It will also remove the requirement for transgender and nonbinary people to divorce for the government to recognize their gender identity and legal name changes.

Pinera opposed same-sex marriage when he entered office in 2018. His opposition stalled the bill, which was proposed to Chile's National Congress by then-president Michelle Bachelet, a socialist, in 2017. Bachelet became the United Nations High Commissioner for Human Rights in 2018. The bill languished in Congress for several years until Pinera did an about-face in June, stunning members of his party, announcing his support for marriage equality, and vowing to push the legislation through in Congress in his annual state of the union address.

He stated in his address that Chile should "value the dignity of all relationships of love and affection between two people."

"I think the time has come for equal marriage in our country," Pinera said in June, clearing the way for the bill to become law. "In this way, all people without distinguishing by sexual orientation will be able to live love and form a family with all the protection and dignity that they need and deserve."

Not everyone agreed, especially members of the president's party.

Pinera supporter and evangelical lawmaker Leonidas Romero of the National Renewal Party described the law as "a tremendous betrayal for the Christian world," reported the BBC.

"We respect democracy, but that doesn't mean we change our convictions," Kast told the New York Times. "For us, marriage is between a man and a woman."

Gay City News reported that Pinera would sign the bill. He will continue to be in office until March 2022.

Boric, a member of the Chamber of Deputies, tweeted following the vote, "#Equal Marriage is the law. Despite the resistance of those who do not believe in freedom, it is reaffirmed that love is love. On this historic day, I tell the diversities and dissidents that in our government they will be safe and will have full recognition of their rights."

Once the bill is signed into law, Chile will become the 31st country in the world to legalize same-sex marriage.

The vote for marriage equality also comes as Chileans marked the second anniversary of mass demonstrations against inequality and calls for social justice throughout the country. The protests turned violent in October 2019 and some demonstrations continue to be plagued with violence, while others are peaceful, reported Reuters.

Gay couple César Peralta and Hans Arias, who were raising two children together, decided to push the needle in the conservative, Roman Catholic-majority country. The couple walked into a government office in Santiago, Chile's capital, and requested to be married, reported the Times.

As expected, they were denied. They walked outside the government building into a sea of reporters organized by Movilh Chile (Movement for Homosexual Integration and Liberation), the country's leading LGBTQ rights organization.

It was a long journey through Chile's courts then up to the Inter-American Commission on Human Rights, the top court in the Americas, and the chambers of Congress. Movilh led the battle focusing on the legal challenge over a legislative fight. The case went to an appeals court in late 2010. It eventually went before Chile's Supreme Court. The court ruled against Arias and Peralta in 2012. Movilh then took the case to the IACHR court.

The Times reported the couple faced ridicule and criticism from Chileans for their relationship and being a gay family during the highly publicized case. Arias and Peralta split up in 2014.

Upon hearing the results of the votes, Peralta expressed pride, joy, and wept.

"I am so moved and so happy that our country, our people, our community, will now have a little more dignity," he told the Times. "I am so happy to have been a part of all this."

"Today we are making significant progress," Zúñiga stated in a December 6 news release from the organization. "This is a gigantic advance, for full legal equality."

The Inter-American Human Rights Court, seated in San Jose, Costa Rica, determined marriage equality as a human right. In 2017, the court called upon all Caribbean and Latin American countries to legally recognize same-sex relationships, if not by marriage then by civil partnership laws.

In 2012, the Bay Area Reporter reported on the Inter-American Court of Human Rights' groundbreaking ruling in favor of a Chilean lesbian mother and her three daughters.

Updated: 12/13/21: This article has been updated to state that the president of Chile signed the same-sex marriage bill.