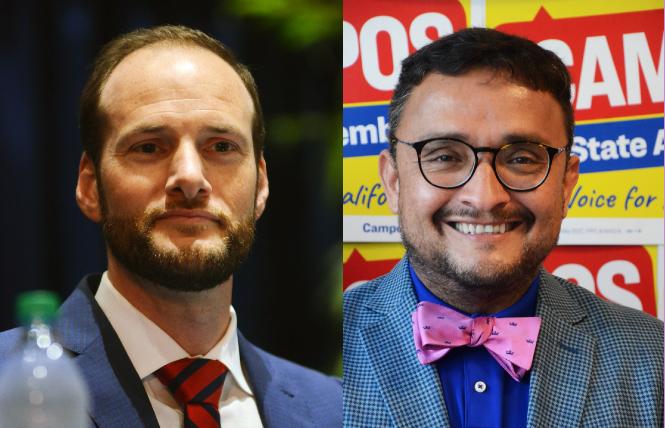 San Francisco District Attorney Chesa Boudin, left, and Assembly candidate David Campos, who is on leave as Boudin's chief of staff, have been named in a lawsuit filed by a former investigator in the DA's office. Photos: Rick Gerharter

An ex-investigator with the San Francisco District Attorney's office filed suit against the city, claiming he was wrongly terminated after threatening to expose alleged Fourth Amendment violations.

The three other candidates in the Assembly race are keeping mum on the matter.

The Fourth Amendment to the United States Constitution protects against unreasonable searches and seizures, requiring issuance of search warrants only when probable cause has been established.

According to the suit, plaintiff Jeffrey Pailet was responsible for making sure that search warrants complied with state and federal laws.

"During this employment, plaintiff Pailet discovered that the SFDA and the other named defendants were improperly instructing investigators to include false, misleading and/or misrepresented information, and/or exclude relevant information, in its search warrants and supporting warrant affidavits to be attested to by SFDA investigators in violation of law," the complaint states.

The complaint continues that Pailet reported this to "various individuals within the SFDA, including, management, various attorneys, supervising attorneys, and the district attorney," and that he "refused to take part in the improper creation and issuance of the search warrants and associated documents."

On November 6, 2020, Pailet was informed of his termination by Campos and Human Resources employee Richard Ng, the suit states.

"As a result of his whistleblower activities, plaintiff was terminated from his employment in retaliation for refusing to allow or take part in the improper creation and issuance of the search warrants and associated documents and reporting these violations," the complaint states. "Plaintiff Pailet requested that the circumstances of his termination be investigated on multiple occasions and in each instance the district attorney's office refused to do any investigation."

Drusinsky and Lacambra were the assistant district attorneys in charge of investigating a 2017 officer-involved shooting, which is not specified in the complaint.

The San Francisco City Attorney's office — which defends the city in lawsuits — issued a statement to the B.A.R. December 7.

Jen Kwart, a spokesperson for City Attorney David Chiu, stated, "The city is committed to a workplace free of retaliation. The city contests this lawsuit. Mr. Pailet filed this matter in court and that is where we will respond."

Boudin did not respond to a B.A.R. request for comment December 7. He is facing a recall effort that will head to voters June 7. Recall proponents blame challenges to public safety on what they allege as Boudin's poor job performance.

"Even though I am on leave from the DA's office, I can't comment on any active case," Campos stated to the B.A.R. "I can comment on the need to hold prosecutors, police, and everyone involved in the criminal justice system to the highest standards to build community trust. Because we need to keep building trust to keep everyone safe."

Campos is running to replace Chiu — who resigned to become city attorney earlier this year — in the state Assembly representing the eastside of San Francisco. The election is scheduled for February 15, with a potential runoff April 19 if nobody gets above 50% of the vote. Campos' rivals are straight allies District 6 Supervisor Matt Haney, City College trustee Thea Selby, and former Obama administration official Bilal Mahmood.

"As this is a lawsuit against the city, I would defer to the city attorney on any response," he stated.

Selby and Mahmood did not respond to requests for comment.