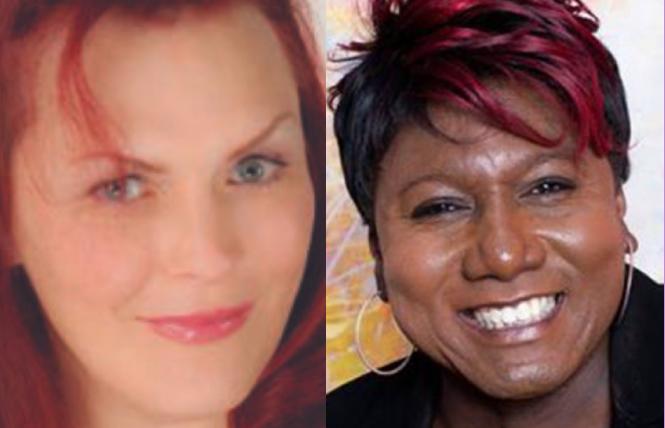 Christina Kahrl, the sports editor of the San Francisco Chronicle, and the late Monica Roberts, a blogger, activist, and founding editor of TransGriot, were named to the queer journalists group's hall of fame in November.

Kahrl became the first out transgender editor at a major metropolitan media outlet when she started at the Chronicle in March. Prior to joining the paper, Kahrl served as a senior writer and editor at ESPN for 10 years, according to NLGJA's website.

In a phone interview with the Bay Area Reporter, Kahrl said that while she appreciates the recognition, she's in the midst of her professional aspirations.

"It's kind of weird," she said. "It's a huge honor, of course, but I think of my career as a going concern. It's the same as writing a memoir; I don't feel like I'm done yet."

Kahrl, 54, said that she loves her job and joined the Chronicle during what has turned out to be a busy sports year in the Bay Area.

"It's liberating in so many ways," she said, adding that many of the sports staff at the paper have supported her and known her since she came out at the end of 2002 and the beginning of 2003.

Kahrl's first week at the paper this spring saw the Stanford women's basketball team win the national championship. That was followed by the San Francisco Giants' "unexpected year," she said, when the franchise won 107 games in the regular season, only to fall to the Los Angeles Dodgers in the postseason. Giants' catcher Buster Posey had a great comeback year — he sat out 2020 due to the COVID-19 pandemic — but announced his retirement once the World Series concluded. Currently, Stephen Curry and the Golden State Warriors are "putting up an amazing season," Kahrl said.

She talked about the fact that she's been out for almost 20 years and how much things have changed for the trans community in some ways.

"The last five years have been difficult for all of us and trans people are dealing with a cycle with far more RPMs than others," she said, using an analogy to indicate the speed of something.

That includes the ongoing violence against trans women, particularly trans women of color, and the effort by many Republican state lawmakers "to politicize our existence," Kahrl said. This year alone saw many bills that would prevent transgender student athletes to participate in sports in line with their gender identity. Some became law and legal challenges are planned or lawsuits have been filed.

Kahrl said it's been disappointing to see division in the trans community.

"It's weird and troubling to see bifurcation in the community. And questions of race, age, and class," she said, adding that there should be support for everyone who is genderqueer.

"We should create a more informed newsroom," she added.

Kahrl is one of the co-founders of Baseball Prospectus, a think tank and website devoted to the statistical analysis of baseball, according to NLGJA's website. The organization has pioneered a number of statistical tools that have become hallmarks of modern baseball analysis. She was the first trans inductee to the Baseball Writers' Association of America, where she votes on Major League Baseball postseason awards and nominees for the National Baseball Hall of Fame.

Kahrl has also served as a prominent activist and advocate for the LGBTQ community, particularly in Chicago, NLGJA noted. In 2014, Kahrl was voted into the Chicago LGBT Hall of Fame and has helped organize the public observation of Transgender Day of Remembrance in the Windy City. She also received the Pride Community Service Award from Cook County in 2015 for her work as an activist for the transgender community in Chicago. Kahrl has served on the boards of Equality Illinois, Illinois Gender Advocates, and GLAAD, and is a lifetime member and former national board director of NLGJA.

Roberts posthumously honored
With TransGriot, Roberts established a blog devoted to covering the experiences of trans women, particularly trans women of color. The Houston native was an award-winning advocate and voice on trans rights issues for over 20 years. Roberts died October 5, 2020 at her Houston home, as the B.A.R. previously reported. She was 58.

In addition to being honored with the 2018 GLAAD Media Award for Outstanding Blog, Roberts became the first trans person to receive the Robert Coles Call of Service Award in 2016. She also received the Barbara Jordan Breaking Barriers Award from the Harris County Democratic Party and the Susan Hyde Award for Longevity in the Movement from the National LGBTQ Task Force.

Roberts began TransGriot in 2004 as a column in The Letter, a Louisville-based LGBTQ newspaper. TransGriot took its name in part from "griot," a word that refers to a storyteller from West Africa. Motivated by a lack of blogs devoted to the experiences of trans women of color, particularly Black trans women, Roberts stated that her mission was to, "chronicle the history of Black transpeople." She frequently covered violence against the transgender community and was often able to correctly identify transgender victims of violence who had been misgendered or incorrectly identified by the police and mainstream media. Shortly before her death Roberts was appointed to the NLGJA's national board of directors, the organization noted on its website.

Established in 2005 as part of NLGJA's 15th anniversary celebration, the LGBTQ Journalists Hall of Fame was launched to make sure that their stories are told and preserved — not just for us, but for all journalists and for our readers and viewers, according to the organization's website. For more information on the hall of fame class, click here.