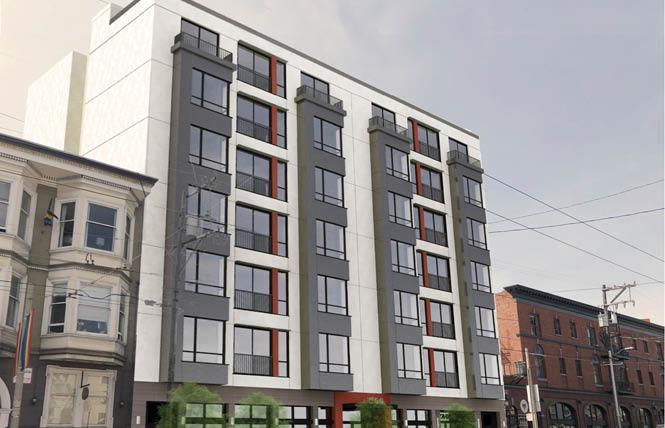 The San Francisco Planning Commission has unanimously approved the redevelopment project proposed for the Church Street site of the former Sparky's Diner. It is the first major housing proposal to move forward in the upper Market Street corridor of the city's Castro LGBTQ district in five years.

Initially set to be a 22-unit housing development, Bash is taking advantage of a state density program for new housing projects to add two additional units in the new building that will be constructed at 240-250 Church Street. Its ground floor 1,992 square foot retail space will be dedicated for use by the French bakery, which will also have dedicated access to the rear-yard for outdoor seating when the business moves back.

Designed by Schaub Ly Architects Inc., the housing will be a mix of 18 two-bedroom units and six one-bedroom units. Three of the units, a one-bedroom and two units with two bedrooms, will be sold as affordable and priced at 80% of the area median income. All of the residential units will have access to a shared roof deck, and although there is no vehicular parking provided, the project will have 30 bicycle parking spaces for the residential and retail components, according to the plans.

Principal architect Jeremy Schaub told the commissioners that "240 Church is an ideal location for urban living without the need for private vehicular transportation."

Due to the decision to now include the required affordable units on-site, the project is entitled to a 24.5% density bonus, or approximately 4,997 gross square feet, for residential uses. The project needed a height waiver for the seven-story building, which is planned to be 74 feet, 11 inches tall.

After a November hearing was pushed back, the planning commission voted 7-0 December 2 to support the recommendation from city planning staffers that it approve the project.

"While I would have liked to see a stronger transition to the corner building at Church and Market, I am in support of the building," said commission vice president Kathrin Moore.

The lone person to oppose the project at the hearing was Stephen Torres, the secretary of the Castro LGBTQ Cultural District advisory board. As the location falls within the boundary of the district, Torres faulted Bash for not meeting with the group regarding the housing development. He said the district's leaders were "disappointed" to first learn about it in a Bay Area Reporter story last month and not from Bash himself.

"For decades Sparky's Diner played a critical role in the queer community," noted Torres, adding, "Alas, the same would not be true of the proposed development."

He faulted the project for being mostly market-rate housing that would do little to assist current LGBTQ Castro residents be able to afford living in the neighborhood. Torres requested the planning body delay voting on the project until after the developer met with the cultural district and other LGBTQ community groups.

Schaub noted that the development team had met with the Duboce Triangle Neighborhood Association and the Castro Merchants Association in addition to nearby residents of the project site over the last two years to elicit feedback.

"Sparky's Diner closed down five years ago, well before this project was envisioned, so not sure how relevant that is," said Schaub.

At the urging of the planning commission, which added it as a condition of its approval for the project, the development team said it would meet with the LGBTQ cultural district to discuss opportunities for adding artwork reflective of the neighborhood and finding ways to provide meeting space for the community in the new building. But Bash stressed his top priority was ensuring that the bakery ended up with a suitable space where its business could thrive.

"We don't want to interfere with their opportunity to operate a business," he said.

Other developments
The upper Market Street corridor has seen a number of mixed-used developments with housing above ground floor retail be built over the last decade. The newest will be the 44-unit condo project at 2238 Market Street by the Prado Group Inc.

Construction on Prado's project began right around the time that the apartment building at the corner of Market, Church, and 14th streets began leasing out its 60 units, eight of which were set aside as affordable. Local contractor Brian Spiers' decision to initially use San Francisco-based startup Sonder to oversee leasing of the furnished market-rate apartments was met with controversy. (Last summer, during the second wave of the COVID-19 pandemic, Sonder sued Spiers to exit their agreement early.)

In May, plans for the Lucky 13 site were submitted to the city that called for a new brick building with 70 units, 10 of which would be below-market-rate, as the pro-housing group SF Yimby noted at the time. LINK: https://sfyimby.com/2021/05/permits-filed-for-2134-2140-market-street-the-castro-san-francisco.html

It is unclear when either of Mirkhani's projects will go before the planning commission.