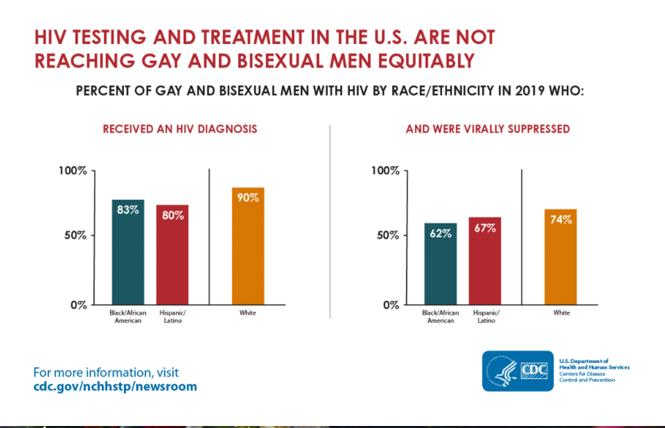 HIV testing and treatment in the U.S. are not reaching all men who have sex with men equitably, as this graph from the Centers for Disease Control and Prevention shows. Illustration: Courtesy CDC

Despite overall progress in reducing HIV among men who have sex with men, Black and Latino gay and bisexual men are not seeing the same improvements as white men, according to a new report released by the federal Centers for Disease Control and Prevention for World AIDS Day.

Black and Latino gay and bi men have not experienced the same decline in new HIV cases as white men, viral suppression and PrEP use are lagging, and queer men of color are more likely to experience HIV-related stigma. But innovative approaches could help close the gap. (The report only discusses Black and Latino men.)

"Several innovative and culturally appropriate strategies have successfully reduced barriers to access of services and might help achieve national goals of improving prevention, diagnosis, and treatment of HIV infection among [men who have sex with men]," Marc Pitasi of the CDC's Division of HIV Prevention and colleagues wrote.

Pitasi's team analyzed national HIV surveillance data from 2010 to 2019, the decade before the implementation of the federal "Ending the HIV Epidemic in the U.S." initiative, which aims to reduce new HIV cases by 90% by 2030.

Men who have sex with men accounted for two-thirds of new HIV cases in 2019, despite making up just 2% of the population. Overall, new cases declined from approximately 25,100 in 2010 to 23,100 in 2019. But while white gay and bi men saw a substantial drop, the number remained relatively stable among Black men and rose slightly among Latino men. Cases also increased among young men ages 25 to 34.

Looking at care indicators in the CDC report, Black and Latino gay and bi men were less likely to know their HIV status and to reach an undetectable viral load after starting treatment, which halts disease progression and prevents sexual transmission. An estimated 62% of Black men and 67% of Latino men diagnosed with HIV achieved viral suppression, compared with 74% of white men.

In San Francisco, 77% of gay and bi men newly diagnosed with HIV in 2020 had an undetectable viral load, though this was down from the year before, likely due to disruptions related to the COVID-19 pandemic. The impact of COVID is not yet reflected in the latest CDC report.

Also on the prevention front, the CDC researchers found that just 27% of Black men and 31% of Latino men who could have benefitted from PrEP were using it in 2017, compared with 42% of white men. Men ages 18 to 24 or 55 and older were less likely to use PrEP than those in between.

Reaching the Ending the HIV Epidemic goal by 2030 would require that at least 95% of new infections are diagnosed, 95% of people who are diagnosed achieve viral suppression, and 50% of eligible HIV-negative people are on PrEP. But in 2019, just 85% of gay and bi men with newly acquired HIV were diagnosed, 68% of those had an undetectable viral load, and a third of those eligible were taking the prevention pills.

Pitasi and colleagues suggested some innovative approaches to expand HIV prevention, testing, and treatment, particularly for Black, Latino, and young gay and bi men, including long-acting antiretrovirals, HIV self-testing, telehealth, integrating PrEP into existing clinical settings, and ensuring that PrEP providers are available in the communities most affected by HIV.

"Right now, with the federal Ending the HIV Epidemic in the U.S. initiative and effective prevention and treatment tools at our disposal, we have a decades-in-the-making opportunity to end our nation's HIV epidemic and erase the glaring health disparities highlighted in this report," co-author Dr. Demetre Daskalakis, a gay man who is director of the CDC's Division of HIV Prevention, told the Bay Area Reporter. "But working to achieve equity for gay and bisexual men of color requires tearing down barriers to testing, prevention, and treatment."

Global inequalities
On the global level, persistent inequalities could lead to 7.7 million AIDS-related deaths over the next 10 years, according to a new UNAIDS report. Entitled "Unequal, unprepared, under threat," the report maintains that bold action against inequalities is needed to end AIDS, stop COVID-19, and prepare for future pandemics.

"Pathogens ranging from HIV to the virus behind COVID-19 invade the cracks and fissures in our society with startling opportunism," Paul Farmer of Partners in Health, a nonprofit dedicated to treating AIDS in settings of poverty, said in a statement.

As of June 2021, an estimated 28.2 million people worldwide had access to HIV treatment — up from 7.8 million in 2010 — but progress has slowed. The global AIDS response is not on track to meet the UNAIDS targets for 2030, which call for 95% of people living with HIV to know their status, 95% of those to be on treatment, and 95% of those to have an undetectable viral load. Gay men, sex workers, people who use drugs, and young women are at particularly high risk for HIV acquisition and poor care outcomes.

As seen in San Francisco, COVID-19 is undercutting HIV care in many countries, including testing, treatment, and prevention and harm reduction services.

"Progress against the AIDS pandemic, which was already off track, is now under even greater strain as the COVID-19 crisis continues to rage, disrupting HIV prevention and treatment services, schooling, violence-prevention programs, and more," said UNAIDS Executive Director Winnie Byanyima. "We cannot be forced to choose between ending the AIDS pandemic today and preparing for the pandemics of tomorrow. The only successful approach will achieve both. As of now, we are not on track to achieve either."

HIV testing and treatment in the U.S. are not reaching all men who have sex with men equitably, as this graph from the Centers for Disease Control and Prevention shows. Illustration: Courtesy CDC