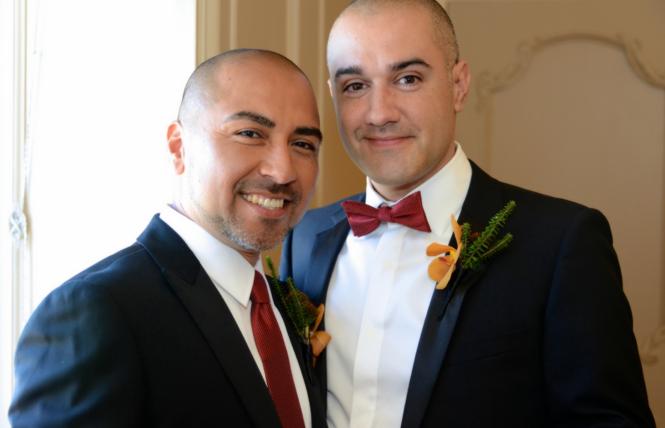 Marco Chavez, left, and his husband, Jimmie Lopez, in a photo taken before Chavez was shot. Photo: Courtesy Jimmie Lopez

Jimmie Lopez didn't think much of it when around 7:40 p.m. on October 30 he saw a strange car sitting idle in front of the Oakland home he shares with his husband, Marco Chavez, and their two children.

"It was definitely an older model — 1990s or early 2000s. I'm not exactly a car buff," Lopez, a 43-year-old gay man, told the Bay Area Reporter. "Maybe a Buick, Oldsmobile, or an older Dodge. Silver or cream; it was dark outside."

As he went back into the house, the car pulled closer to the front of the couple's home. Chavez was holding their 5-week-old baby girl behind the living room's bay windows. Their 4-year-old daughter was also in the room.

"I told Marco and the girls to get ready for dinner," Lopez said. "Within a couple of seconds, I started hearing the sound of firecrackers, then the clinking of metal, so I started screaming 'get down, get down, get down.' Then, I heard Marco let out a ruffled moan."

When Lopez got to Chavez, he saw two to three puddles of his husband's blood. He'd been shot in the mouth.

"I was trying to flip him over, but he wouldn't let me," Lopez said, explaining he wanted to check if Chavez had also been shot elsewhere.

Lopez called 911. An ambulance and the fire department showed up, followed by Oakland police.

Unexplained act of violence
Chavez had been standing in front of the bay windows with the "blinds up and lights on," according to Lopez.

Lopez said that 12 bullet casings were recovered by police in front of the couple's home.

"Police gave a couple of scenarios but none made sense to me," Lopez said. "They said maybe they [the people in the car] saw someone who was a target and that person was being shot at and they missed, and I said 'with all due respect, they shot 12 rounds at someone in front of our home that wasn't hit, and no other home had any disturbance?' If you fire 12 shots and you miss someone, I imagine you keep shooting. It doesn't make sense."

Lopez added, "I cannot for the life of me understand why someone would do this," but speculated that "the first thing in my mind is maybe, you know, some people in the Bay Area don't like people who are gay. I'd hate to think that's the reason for the crime. If it was a stray bullet, I could make some sense of that, but this is not what that was."

In a statement to the B.A.R., the Oakland Police Department stated that it is investigating the shooting.

"A victim was struck by gunfire and transported to a local hospital, where they were last listed in stable condition," a police spokesperson stated. "There were two ShotSpotter activations associated with this incident. This investigation is ongoing and we do not have any other details to release at this time." (ShotSpotter is a gunfire locator service that Oakland police use.)

Couple moved to West Oakland
The couple moved to their house near the West Oakland BART station three years ago after many years in San Francisco's Mission neighborhood, Lopez said. They met in 2006 at the Bar on Castro, which was at the location where Q Bar is today.

"I'd just moved there [to San Francisco] and I met Marco a month or two later," Lopez said, adding that they were married in 2014 and had both of their children via surrogacy: the first in 2017 and the second just weeks before the shooting.

Relocating across the bay from the one-bedroom condo they'd lived in, the couple was excited to move to what they saw was "a nice neighborhood." Still, they didn't spend much time in Oakland since they commute to San Francisco daily and "most of our friends and family live outside of Oakland."

Lopez said that since the shooting he's "just getting through the day."

"It's been hard," Lopez said. "I think if you'd asked me in the first couple days, I was a disaster."

Chavez is looking at "a two-year period before he can reach normal," Lopez said. After a surgery to flush out the wound, another surgery removed bullet fragments, and still more procedures were required to install a plate in his jaw.

"They left a piece of bullet in his neck because it's too close to an artery," Lopez said. "Tissue will grow around it and it'll become part of his body."

Lopez said that Chavez has lost a considerable amount of weight. He is now out of the hospital but will have to have dental implants and reconstructive surgery.

"He's OK but he has a very different physical appearance," Lopez said. "He never lost consciousness and is always worried about other people and his family. He always has a positive demeanor. ... If you talk to anyone who knows him, he's the kindest, most positive person. He will always pull you out of the dark. He's continued to do this every day now."

For a while, "texting was the only way" Chavez could speak because his jaw was wired shut. It is still difficult for him to speak. He told the B.A.R. November 30 over the phone that "I'm good; I'm doing OK" but requested to subsequently answer questions via text message.

In a text, he stated that morning he'd met with his surgical team at the Highland Hospital dental clinic.

When asked how the experience of the past month has been, Chavez wrote "a roller coaster ride."

"Shocking to have our home and foundation for three years be shaken and crumble right underneath us in a blink of an eye," Chavez wrote. "Grateful for the opportunity to see another day with my family. Overwhelming amounts of support from our friends, colleagues, family, neighbors and strangers all pulling together and helping lift us up. I'm thankful for our angels."

"He gets really tired," Lopez said. "His body is regenerating."

None of the family is staying at the couple's Oakland home, which they hope to sell. The couple set up a GoFundMe to help with expenses. So far it's raised nearly $88,000 of a $100,000 goal.

Lopez said that initially "our 4-year-old insisted that she hadn't seen anything," but subsequently "she started talking about daddy, 'his ouchie,'" and details of the shooting.

"I don't want that trauma to be there," Lopez said.

Chavez wrote that "the most difficult and heartbreaking struggle is being separated from my husband and two beautiful girls."

"No amount of pain management helps you deal with the separation, and now as we begin our therapeutic journeys, the struggle of helping a 4-year-old make sense of this," Chavez wrote. "How do you do that?"

'I don't believe somebody didn't see something'
Police have not been able to connect the bullet casings to other crimes, Lopez said. Police said they'd also investigate if there is video footage in the area that can help identify the shooters, but the police have not contacted Lopez in weeks, he said, and neither have they determined a motive or released suspect descriptions.

Lopez is imploring anyone with knowledge to come forward.

"Especially in the Bay Area, you see a lot on the street and think 'that's none of my business,' but if you see anything, call it and report it," Lopez said. "At 7:40 at night near BART, I don't believe somebody didn't see something."