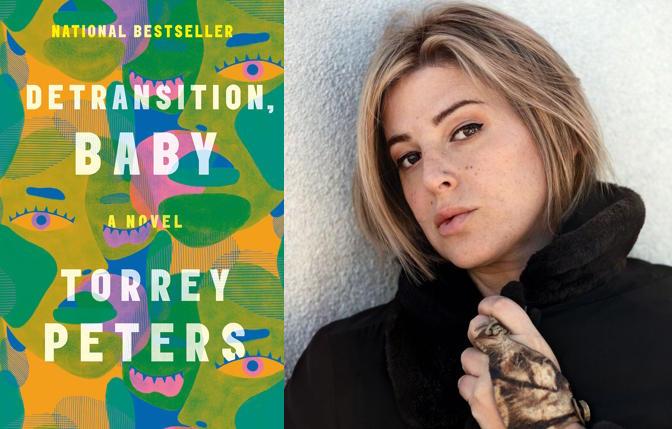 Brooklyn-based author Torrey Peters's frothy debut novel, a brilliantly entertaining study in trans feminine culture, chronicles the fiery relationship between a trans woman and her ex-partner, who becomes infused back into her life in an unusual but not a completely unsurprising way.

Reese and Ames were a New Yorker couple extending back into the years when Ames was living as "Amy," but who has now decided to "detransition" back to maleness as Ames.

But now, Ames has made the grave error of impregnating his secret lover Katrina, who, as his boss, isn't wild about having a baby, and while the idea of being a father isn't ideal, Ames calls Reese in a moment of weakness. Though they aren't on speaking terms, he is desperate for her acceptance in a life-changing opportunity involving her becoming a second mother to his as yet unborn child. Can a relationship be salvaged and a blended family be christened?

Compounding this conundrum is Katrina's reaction when Ames reveals to her that he used to live as a woman, which is as real and raw as it gets. Peters never sugarcoats this kind of material and consistently conjures a literary atmosphere that is both utterly engaging and unflinchingly intense.

Unlike Katrina, Reese doesn't skewer Ames for his decision to detransition. She knows all too well how difficult gender transitioning is and how many of her friends have succumbed to the psychological pressure and the physical and emotional pain involved in the process. This is starkly illustrated when she attends the funerals of trans women acquaintances who took their own lives.

Though the novel's narrative duties are sensibly split between Reese and Ames, it is sassy, self-destructive Reese who emerges as the most addictive with her jaded, unsubtle, razor-sharp observations and assessments of those around her. While Ames spins in place at the mercy of his predicament, it is Reese who takes charge, grabs the situation by the proverbial balls, and, though initially hesitant at the proposition laid out before her, ultimately gives in to the opportunity at motherhood while the age "odometer clicked up into her mid-thirties."

The story's ability to encompass a more contemporary readership will be through Reese's evaluation of female aging using a universally-recognized television series. Her self-described "Sex and the City Problem" consists of women associating with each of the four characters headlining the program as either artsy (Carrie), motherly (Miranda), career-driven (Samantha), or marriage-minded (Charlotte) as female maturity replaces years of youthful bliss.

This is a first novel for author Peters, 39, who previously kept her work (mostly self-published novellas about trans women) confined to a personal website where browsers could purchase physical books or e-reader files. With this release through a major market publishing house, she breaks through the tough exterior surrounding publishers who had formerly remained stagnant about releasing books by and about the transgender community, fiction or otherwise.

With solid prose that is humorous, polished, painfully realistic, and seductively engrossing, this is a novel of transness, pregnancy, and a flawed group of folx coming back together to meet in the middle of what could potentially have morphed into a horrid mess, only to rescue the circumstance and remold it into something uniquely queer.

The heart of the story lies in the ever-evolving framework and configuration of what is accepted as family and the unconditional love and sense of belonging that keeps it in such high demand. Peters is a writer with imagination and talent to spare, and a queer artist to keep an eye on in the coming years.